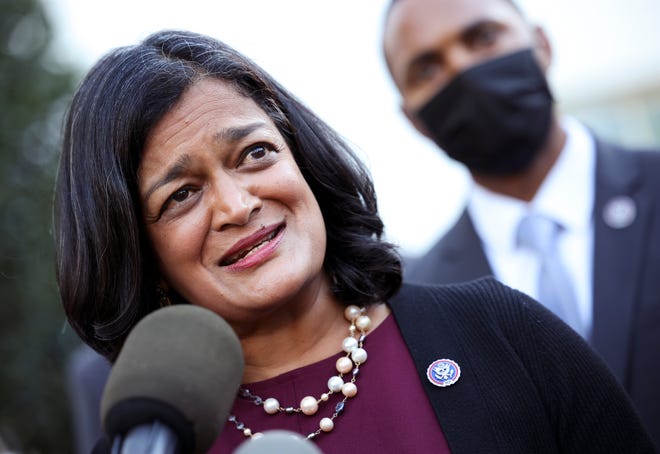 WASHINGTON — The leader of progressive House Democrats said Tuesday her members had a “really good, productive meeting” with President Joe Biden as the president works to get separate wings of his party to agree to a legislative package between $1.9 trillion to $2.2 trillion for his climate and social safety-net agenda.

“We all still feel even more optimistic about getting to an agreement on a really transformational bill that will fundamentally lift people up,” said Rep. Pramila Jayapal, D-Wash., chair of the House Progressive Caucus.

Biden hosted nine members of the left-leaning caucus for more than two hours Tuesday, and met separately with a group of moderate House members and senators, as the White House pushes “urgency” to get the president’s economic agenda passed.

Jayapal said Biden is sticking to a topline number between $1.9 trillion and $2.2 trillion, down from his original $3.5 trillion Build Back Better proposal, in a push to gain the support of moderate Democrats.

“Look, it’s not the number that we want. We have consistently tried to make it as high as possible, Jayapal said, but added progressive Democrats are now focused on getting the bill’s social and climate programs jump-started.

White House Press Secretary Jen Psaki said Biden is “more confident this evening” about the path forward following “a day of constructive meetings.” She said talks centered on a “shared commitment” to the care economy, helping working families, addressing the climate crisis and investing in industries of the future.

“There was broad agreement that there is urgency in moving forward over the next several days and that the window for finalizing a package is closing,” Psaki said in a statement.

Biden needs the votes of all 50 Democratic members to pass the bill in the Senate in a procedure known as reconciliation, but Manchin and Sinema have balked at the price tag. Manchin has said his limit is $1.5 trillion.

House progressives have said they won’t take up another piece of Biden’s domestic agenda – a $1 trillion infrastructure bill that passed in the Senate in August – unless the more expansive reconciliation package advances.

Manchin has signaled opposition to a climate proposal in Biden’s reconciliation package that would offer incentives to fossil fuel companies that transition to clean energy. Jayapal said climate remains “one of the most challenging places” for progressives to reach a final agreement.

As Biden and Democrats look to bring down the cost of the package, progressive have pushed for shortening the length of the spending, rather than cutting programs altogether.

“I think he is with us that we need to invest in as many of those transformational areas as possible,” Jayapal said of Biden, “even if it means for some of them a shorter amount of time.

Biden is hitting the road Wednesday to promote his proposals with a stop planned for his hometown of Scranton, Pa. The president faces pressure to get measures passed to address climate, in particular, before Biden takes part in a United Nations climate summit in Glasgow Oct. 31.