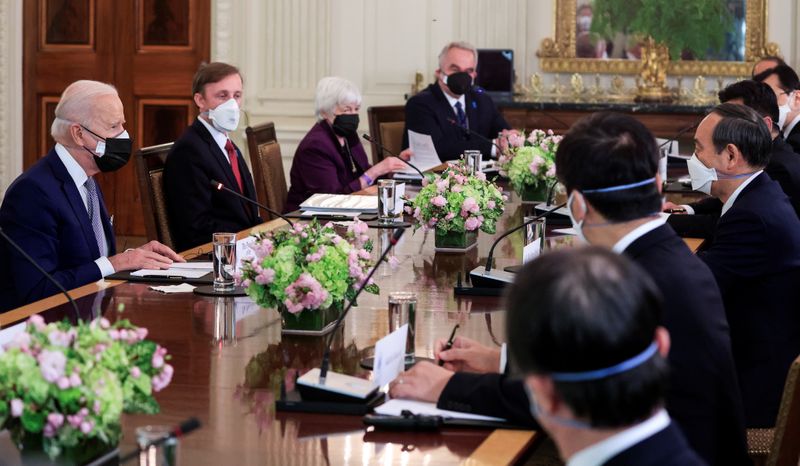 By Trevor Hunnicutt and David Brunnstrom

Biden welcomed Suga for a one-day summit that offered the Democratic president a chance to work further on his pledge to revitalize U.S. alliances that frayed under his Republican predecessor, former President Donald Trump.

“Our cooperation is vital … to meeting the challenges facing our nations and ensuring the future of the region will remain free and open,” Biden said as he sat down with Suga. The two countries, he added, have a “big agenda ahead of us.”

With China topping the list, the meeting was expected to yield steps for diversifying supply chains seen as over-reliant on Beijing and a $2 billion commitment from Japan to work with the United States on alternatives to the 5G network of Chinese firm Huawei, a senior U.S. official said.

Biden and Suga also planned to discuss human rights issues related to China, including crackdowns in Hong Kong and on Muslim Uighurs in Xinjiang, the official said.

The summit, Biden’s first in-person meeting with a foreign leader as president, is expected to produce a formal statement on Taiwan, a Chinese-claimed, self-ruled island under increasing military pressure from Beijing, said the official, who did not want to be identified.

It would be the first joint statement on Taiwan by U.S. and Japanese leaders since 1969. However, it appears likely to fall short of what Washington has been hoping from Suga, who inherited a China policy that sought to balance security concerns with economic ties when he took over as premier last September.

In a statement after a March meeting of U.S.-Japan officials, the two sides “underscored the importance of peace and stability in the Taiwan Strait” and shared “serious concerns” about human rights in Hong Kong and Xinjiang.

The U.S. official said that both countries, while not wanting to raise tensions or provoke China, were trying to send a clear signal that Beijing’s dispatch of warplanes into Taiwan’s air defense zone was incompatible with maintaining peace and stability.

A Japanese foreign ministry official said this week it had not been decided whether there would be a joint statement and two Japanese ruling party lawmakers familiar with the discussions said officials have been divided over whether Suga should endorse a strong statement on Taiwan.

The U.S. official said Washington would not “insist on Japan somehow signing on to every dimension of our approach” and added: “We also recognize the deep economic and commercial ties between Japan and China and Prime Minister Suga wants to walk a careful course, and we respect that.”

China’s foreign ministry spokesman Zhao Lijian said on Friday that China has expressed solemn concern about what he called “collusion” between Japan and the United States, and the countries should take China’s concerns seriously.

Suga arrived at the West Wing doors in a black sports utility vehicle flying U.S. and Japanese flags. The driveway was lined with a flag-bearing military honor guard.

He met earlier with Vice President Kamala Harris, and following Oval Office talks with Biden the two leaders were due to hold a joint news conference. On Friday morning, Suga participated in a wreath-laying ceremony at Arlington National Cemetery.

“Freedom, democracy, human rights and the rule of law are the universal values that link our alliance,” Suga said in the meeting with Biden. “The importance of such values has risen to an unprecedented level.”

As they sat down for talks, Biden, Suga and their two delegations all wore masks, in keeping with protocols to protect against the spread of the coronavirus pandemic.

With the Suga meeting and another planned summit with South Korea in May, Biden hopes to energize joint efforts with Australia, India and Japan, in a grouping known as the Quad, as well as with South Korea, to counter both China and longtime U.S. foe North Korea.

It requires a delicate balancing act given Japan and South Korea’s economic ties with China and currently frosty relations between Seoul and Tokyo.

Also expected to figure into the White House discussions are the summer Olympics due to be held in Tokyo. Psaki said the administration understands the careful considerations Japan is weighing as it decides whether to go ahead with the games. Japan is grappling with rising coronavirus infections with fewer than 100 days from the planned start.

The emphasis on Japan’s key status could boost Suga ahead of an election this year, but some politicians are pushing him for a tougher stance towards Beijing as it increases maritime activities in the East and South China Seas and near Taiwan.

The United States, the European Union, Britain and Canada have all imposed sanctions on Chinese officials for alleged abuses in Xinjiang and some Japanese lawmakers think Tokyo should adopt its own law allowing it to do the same, even as Japanese executives worry about a Chinese backlash.

China denies any human rights violations, but Washington says Beijing is perpetrating a genocide in Xinjiang.