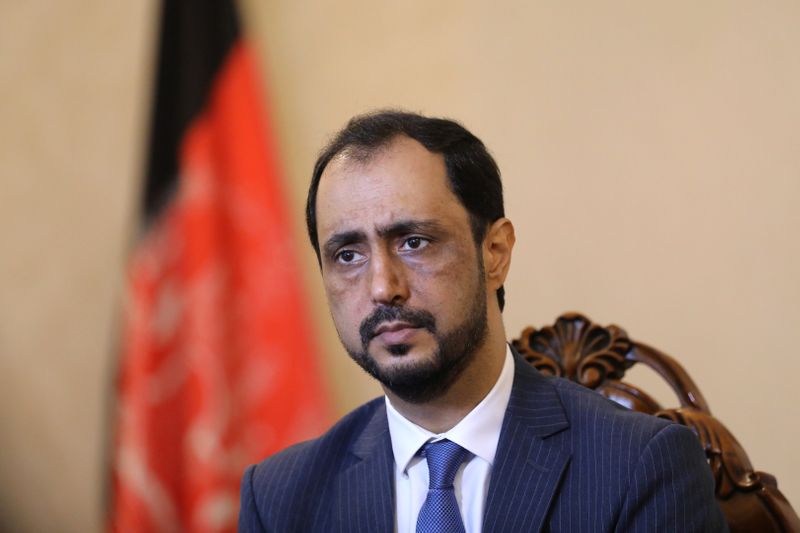 BEIJING (Reuters) -The Taliban cannot be trusted to keep their promise to China not to harbour Islamist militants seeking separatism in its Xinjiang region, Afghanistan’s ambassador to China told Reuters, a week after China hosted Taliban officials.

The withdrawal of U.S. forces from Afghanistan, and a surge in fighting as Taliban insurgents gain territory, raise concerns for China, which worries that more instability in the region will disrupt its Belt and Road plan for infrastructure and energy links to the west and embolden separatists to destabilise its far western Xinjiang region.

The Taliban pledged not to interfere in China’s internal affairs or allow Afghan territory to be used by anti-China forces.

But Afghan ambassador to China, Javid Ahmad Qaem, was dismissive of Taliban promises.

“I don’t think even China believes in that,” Qaem told Reuters in an interview, adding that the Taliban were “only saying this to get regional support”.

Instead of backing one Afghan side against another, as the United States and the Soviet Union have done in the past, China has adopted an “Afghan-led, Afghan-owned” approach, in line with its principle of non-intervention.

“The Chinese position is they want to mediate,” Qaem said in the Thursday interview at his embassy, adding that the U.S.-backed Afghan government welcomed China’s involvement and he understood why it wanted to stick to the middle ground.

The United Nations said in a report last month that the East Turkestan Islamic Movement (ETIM), a militant group affiliated with al Qaeda that China says wants to set up a separate state in Xinjiang, is active in Afghanistan in areas including the northeastern province of Badakshan, where China and Afghanistan share a remote 76 km border.

Qaem, 41, who has been in his post since November 2019, scoffed at the suggestion the Taliban might turn against their fellow militants from Xinjiang.

China has maintained friendly relations with the Afghan government but also has also hedged its bets, analysts say, with its ties with the Taliban. Last month’s visit by a Taliban delegation followed a similar one in 2019.

In receiving the Taliban officials in their traditional tunics and turbans, Wang called them a “significant military and political force” expected to play a key role in Afghanistan’s reconstruction.

“As the Taliban gain inroads, China wants to maintain contact and ensure that it is not in the Talibans’ bad books, just in case they come to power,” said Yang Chaohui, a lecturer at the School of International Studies at Peking University.

Qaem said he would prefer that China was fully behind the government but also said that Beijing was transparent about its engagement with the Taliban, informing the government before extending its invitation and briefing it afterwards.

“We have faith in the Chinese intentions,” he said.

Qaem said the Afghan government had not asked China to send troops to support it but it could help in other ways.

China could encourage Pakistan – which has long seen the Taliban as the best option for limiting the influence of old rival India in Afghanistan – to build trust with the Afghan government, Qaem said.

China could also serve as a conduit for messages from Kabul to the Taliban, as it was at last week’s meeting – relaying a government call for a ceasefire and an appeal for an inclusive political framework, he said.

China can also help in boosting trade and buying more Afghan products such as saffron, he said.

“So as long as that is provided, I don’t think China needs to send boots,” he said.