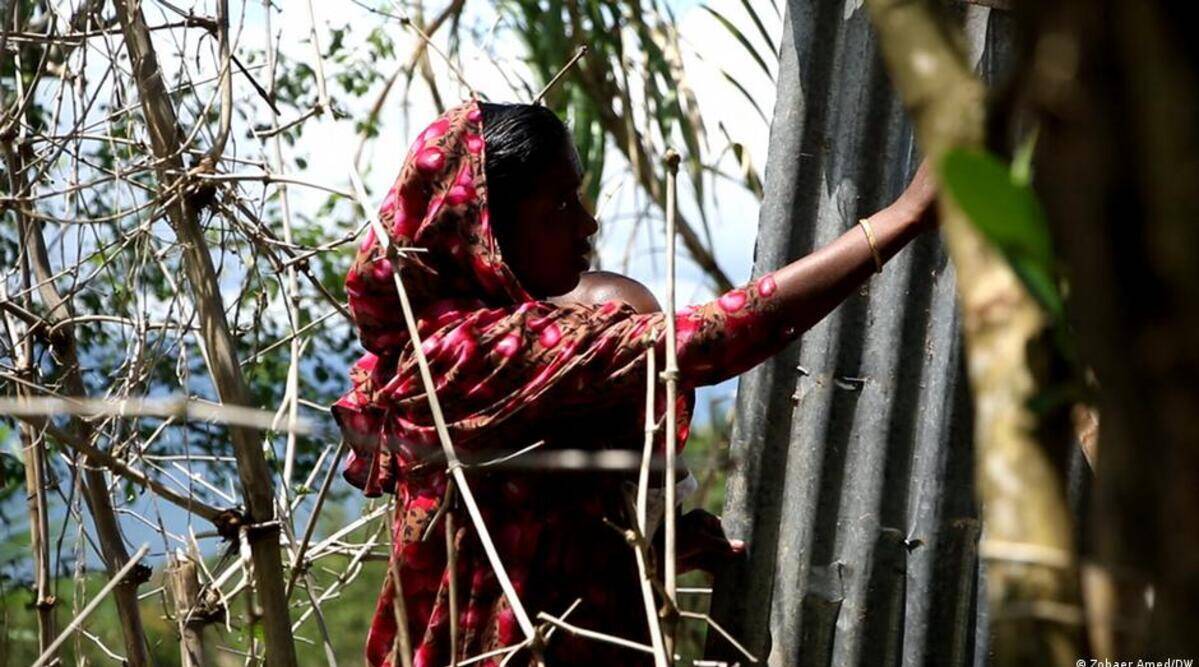 The resilience of people in northeastern Bangladesh against Himalayan flooding has been severely challenged this year. Thousands of homeless and destitute people have struggled to deal with extreme flooding.

Sixty-five-year-old Nurjahan’s toe began to hurt after she fell down on the muddy way up to her home, which was made from corrugated tin walls.

With her achy feet and a 10-liter (2.6-gallon) pot of water, Nurjahan was having trouble climbing up to her house, which is elevated 1.52 meters (5 feet) above the ground with mud and sand.

“We normally lift our houses to that height to save them from flood water,” Nurjahan told DW. “But this year’s flood washed away everything,” Nurjahan said. “The water reached that level.”

Nurjahan lives in a northeastern upazila (administrative region) of Bangladesh, called Companyganj, which borders India’s Cherrapunji region, one of the wettest places on earth. In July of this year, excessive rainwater flowing down from the surrounding hills of India’s Meghalaya state, stranded millions like Nurjahan, who took refuge in a government shelter during the flooding.

Bangladesh’s northeast was hit by flash floods in May. Then in June and July the monsoon brought erratic and excessive rainfall.

According to government data in India, an unprecedented 970 millimeters (38 inches) of rain was recorded in just one day.

As a result, the northeastern region in Bangladesh and India was largely inundated. This has affected almost 9 million people and killed hundreds. For days, people were marooned by water, without food and water supplies.

Nazirun Begum, 21, lived with her deaf husband and two toddlers on the bank of the Dhalai River in Sylhet. The river was inundated, and her house was washed away.

While Begum was sharing her woes, 55-year-old Mohammad Alam, a local shop owner, chimed in.

“Water was flowing over the roofs. I was rowing a boat and saw people’s possessions being washed away,” Alam told DW.

Sitting on the ruins of her house Nurjahan said: “We live with floods. But, in my life, I have never seen a flood like this.”

Not enough aid to rebuild homes

Though Begum has received some relief from regional authorities, she has no idea how to rebuild her home.

“I have received some rice, onions and other food items,” Begum said. “I have also received some medicine for my sick child, and they gave me a few tin sheets. But I have no money to start again.” She now rents a room in a local government official’s house.

Approximately, 120 kilometers (70 miles) away, in the haor (wetlands) area of Bangladesh’s Sunamganj district, live Usha Rani Das, 51, and Nioti Rani Das, 32. This is one of the lowest-lying areas of Bangladesh and is always under water during the monsoon season.

“Every year we build a house, and every year a flood takes away our house,” Usha Rani Das told DW. “We have limited income. With the money we should use to feed ourselves, we use that to build the house.”

Government and aid agencies have provided small amounts of cash and other relief including housing materials as an emergency response, but it has not been enough to help people rebuild their lives.

Bangladeshi people are resilient to floods. People in the low-lying areas face flooding almost every year. Traditionally, they build their houses a bit higher in those areas so that the flood water doesn’t damage the houses.

Saidur Rahman, 57, a day laborer and a boatman in Sunamganj’s wetlands, rescued several people during the floods.

“When the water rises to a dangerous level, people leave the houses and take refuge in the shelters. As the water goes down, we come back and fix whatever is damaged. But this time the flooding was so big that our traditional way of living is now threatened,” Rahman told DW.

Experts say that, because of climate change, this type precipitation and severe flooding will occur more frequently.

In the Sylhet district, Nurjahan’s neighbor Nowshad Ali, 55, has put more than 100 sand sacks into his basement to keep his home standing.

“This is to save the house from falling down. I can’t afford more than that,” Ali said, showing the cracks in the brick walls.

“The excess Himalayan flooding has damaged many of our dams, and it has also brought a lot of sediments,” Niloy Pasha, a Sylhet-based engineer on the Bangladesh Water Development Board, told DW. “So, our rivers and haors could not hold the water.”

Bangladesh is implementing long-term measures such as dredging the transboundary Surma and Kushiara rivers and other northeastern rivers to expand their capacity to hold water. However, these measures alone can’t solve the problem, according to the officials.

“You can’t dredge 2 meters of a river. The banks will collapse,” Pasha said, adding that that unplanned infrastructure in the haors is also increasing the negative effects of floods.

The local government of Bishwambarpur Upazila of the Sunamganj district has introduced an experimental floating house for Sukhu Rani Das and her family. She is a neighbor of Usha and Minoti Rani Das.

“They say that the house will float even during high tide,” said Sukhu Rani Das.

Sadi Ur Rahim Zadid, a regional official, said the experiment had challenges. “I was inspired by the floating houses in Vietnam. As this place is always under water, I thought this could be a solution,” Zadid told DW.

The house is made of corrugated tin sheets, bamboo and wood. Water drums are tied underneath, so the house floats.

“We have to see how it survives in the dry seasons. Also, the cost is much more than the traditional houses. These poor people can’t afford that. But it is a start. We have to work more on these types of solutions,” Zadid said.

Sukhu Rani Das’s neighbors Usha and Minoti are also waiting for a floating house — although they are not sure that this will solve all of their problems.

“We are afraid of the future. Maybe a floating house will stop us floating around during floods, or maybe not. We know we have to live with floods. We just don’t want to have to rebuild our homes after each and every flood,” Usha said.