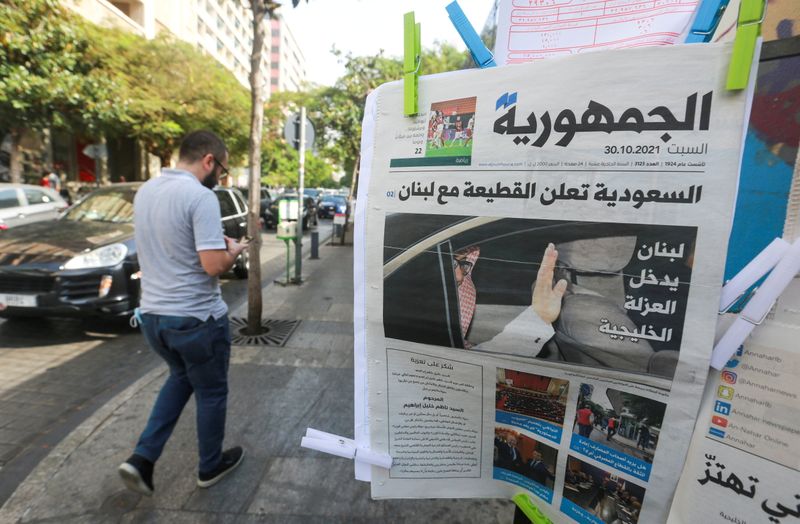 FILE PHOTO: A man walks near a newspaper with a headline that reads ” Saudi Arabia announces a boycott with Lebanon” in Beirut, Lebanon, October 30, 2021. REUTERS/Aziz Taher/File Photo

CAIRO (Reuters) – Bahrain’s foreign ministry on Tuesday urged citizens in Lebanon to leave immediately, the state news agency reported, amid a deepening row over comments by a Lebanese minister that were critical of the Saudi-led intervention in Yemen.

Yemen’s Saudi-backed government also recalled its ambassador to Beirut on Tuesday for consultations, the state news agency SABA reported, over the comments made by George Kordahi before he became Lebanese information minister.

In an interview he said was recorded on Aug. 5, before the formation of a new Lebanese government, Kordahi called the Yemeni war futile, said Yemen was subjected to an aggression and that its Iran-aligned Houthis were defending themselves.

A coalition of forces led by Riyadh intervened in Yemen in March 2015 after the Iran-aligned Houthis ousted the internationally-recognised government from the capital Sanaa.

The Houthis say they are fighting a corrupt system and foreign aggression.