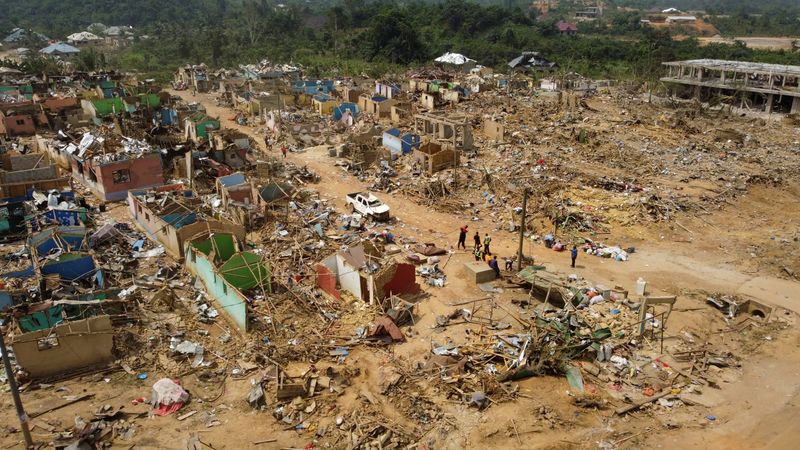 Debris of houses and other buildings that were destroyed when a vehicle carrying mining explosives detonated along a road in Apiate, Ghana, January 21, 2022. Picture taken with a drone. REUTERS/Cooper Inveen

By Cooper Inveen and Christian Akorlie

ACCRA (Reuters) – At least 17 people were killed and scores injured when a truck carrying explosives to a gold mine in western Ghana collided with a motorcycle, setting off an explosion that flattened a rural community, the government said on Friday.

As rescuers combed the site for survivors, videos posted on local media showed hundreds of buildings reduced to piles of wood, rubble and twisted metal, and dead bodies crumpled on the ground surrounded by debris.

A photo shared by a local politician showed a yawning crater at the epicentre of the blast, onlookers peering down from its rim.

Seji Saji Amedonu, deputy director general of the National Disaster Management Organisation said around 500 buildings were destroyed and that rescue efforts were still under way.

The blast occurred on Thursday in Apiate, a settlement between the towns of Bogoso and Bawdie, when a motorcycle fell under a truck owned by a company called Maxam that was transporting explosives to the Chirano gold mine, run by Toronto-based Kinross Gold Corporation, police said.

Kinross confirmed the incident and said it was monitoring the situation and rescue efforts. Maxam could not be reached for comment.

The Ministry of Lands and Natural Resources is investigating the cause of the blast and whether the companies involved followed regulations covering transportation of explosives, it said in a statement.

Survivors in critical condition are being evacuated to medical facilities in the capital Accra, the government said.