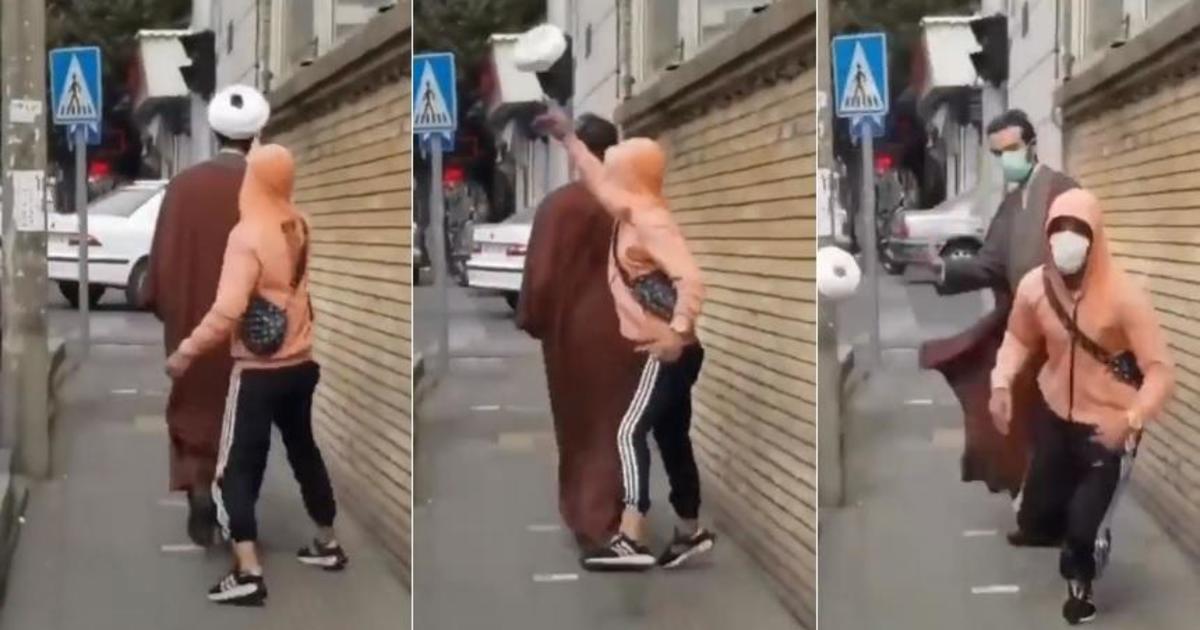 As Iran’s military warns it is prepared to step in and quash a wave of anti-government protests, a new trend has emerged in Iran aimed squarely at embarrassing and belittling the Islamic republic’s ruling elite. Videos showing young protesters running past and knocking the turbans off the heads of unsuspecting Islamic clerics in public have swept across the internet in recent weeks.

The “turban tossing” trend has spread with the street protests still ongoing. The unrest — the most significant challenge to Iran’s hardline Islamic theocracy ever — was sparked by the death of 22-year-old Mahsa Amini on September 16, after she was arrested by Iran’s morality police for allegedly failing to adhere to the country’s strict dress code for women, which requires them to cover their hair in public.

Social media has been flooded with videos of young Iranians running up behind clerics on the streets and smacking their turbans off their heads. The practice has become so widespread that many clerics have been seen wearing covers over their turbans in a bid to keep them firmly in place, but videos show even some anchored turbans flying off at the hands of the often-masked protesters.

Holly Dagres, a senior fellow and Iran analyst at the Atlantic Council, shared one video compiling more than a dozen of the clips, set to the background music of a popular dissident Iranian rapper who is currently in prison.

While most of the turban toppling involves quick sneak attacks that merely leave the clerics grappling for their headgear, in some cases the religious figures can be seen confronted by small crowds, and even being hit or slapped.

A person using the alias “Sir Antonio Su Padre” sardonically announced in a Tuesday tweet the establishment of the “Iran Turban Throwing Federation” — a body purportedly aimed at regulating and rating the turban-flipping activities.

A Twitter account set up by the “Federation” published dozens of videos of turbans flying off heads and assigned scores to the “contestants” based on their maneuverability, tossing techniques, and the distances flown by the headwear.

Iranians have risked arrest to speak out against the regime in many ways over the last two months, from viral protest songs to graffiti and other subtle moves, but the street protests are the most visceral manifestation of young Iranians’ frustration. The widespread demonstrations have entered their eighth week, and they’re showing no signs of scaling back despite a violent crackdown and mounting threats from the authorities.

Rights groups say more than 300 protesters have been killed by Iranian security forces in a brutal crackdown already, and the commander of the Iranian Army’s ground forces warned on Thursday that the only reason the “riots” were still taking place was because the country’s Supreme Leader, Ayatollah Ali Khamenei, had yet to give an order for them to be crushed.

“The conspirators, who today are like puppets in the hands of the enemy, should keep in mind that we will not allow the sacred blood of the martyrs to be trampled on,” Iran’s Mehr news agency quoted Brigadier General Kioumars Heydari as saying. “We will stop them if they try to take to the streets.”

He vowed that if Khamenei gives “the order to deal with them, they will have no place in our country.”

Not all Iranians are in favor of the new protest action, however, and among the detractors are people who by no means back the regime.

Some argue that humiliating the mullahs in public essentially imposes the same insecurity on religious figures that women have felt in the country since the 1979 Islamic Revolution brought the current government to power. Others note that not all Islamic clerics in Iran necessarily represent or support the regime.

“This phenomenon, known as ‘turban throwing,’ which has become the joy of some opponents, mainly targets scholars who do not hold any government positions. They may even be critics or victims of current policies,” Ahmad Zaidabadi, an Iranian academic and member of the Iranian reform movement, wrote on his blog. “Mullahs who have high positions in the regime usually do not walk in public, and if they do, they have the necessary protection.”

But while turbans are purely signs of religious learning in Iran — not status or political power — they are seen widely as symbols of the current regime.

“Protestors do not consider this dress to be only the dress of a guild, but they consider it a symbol of oppression, corruption and tyranny; They believe that during decades of oppression, the clerics were either rulers, or complicit with the government or remained silent,” Paris-based Iranian reformist and cleric Mohammad Javad Akbarin said in a message posted to his channel on the Telegram app.