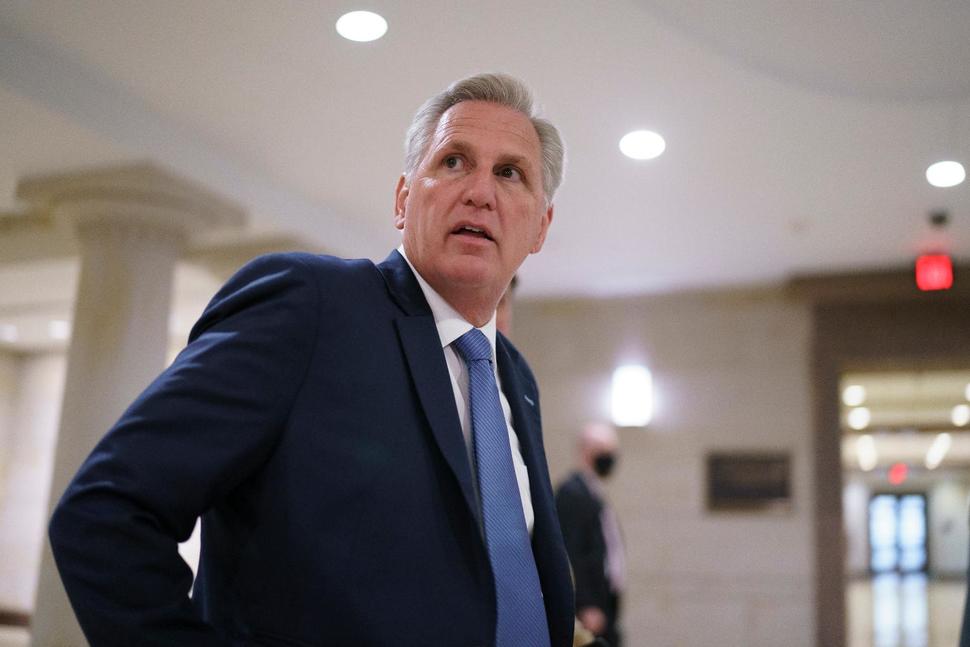 House Republican leader Kevin McCarthy and other members of his party are falsely blaming President Joe Biden for higher gasoline and lumber costs ahead of the Memorial Day weekend.

Heading into the Memorial Day travel weekend, House Republican leader Kevin McCarthy and other members of his party are falsely blaming President Joe Biden for higher gasoline and lumber costs.

Gas prices have risen in recent weeks because a key pipeline was forced to close after a cyberattack. And lumber shortages — which existed during former President Donald Trump’s administration — were worsened by an unexpected housing boom.

Shortages have bedeviled the economy this spring, but most economists attribute the bulk of them to the difficulties of restarting the U.S. and global economies.

A look at the claims and reality:

MCCARTHY: “Despite gas prices being at historic lows this time last year, the average price for a gallon of gas is currently an astounding $3.10. That’s the highest it’s been since 2014, the last time Joe Biden was in the White House.” — blog post on Monday.

REPUBLICANS on the HOUSE BUDGET COMMITTEE: “Biden’s policies have led to the highest gas prices in six years.” — tweet Tuesday.

THE FACTS: Biden’s policies aren’t behind the price increases. Gas prices are up because of a rapid and unexpected bounce-back in demand, and because of lingering problems from the forced shutdown early this month of the Colonial Pipeline, which provides 45% of the fuel consumed on the East Coast.

McCarthy’s comparison to a year ago is also misleading. Gasoline prices didn’t fall at the time because of the Trump administration, as Trump often claims; they plunged because of the coronavirus forcing people to abandon their offices, schools, business trips and vacations. Underscoring the connection to the pandemic shutdown, U.S. gas prices were at their lowest in April 2020 when people were staying home most but have mostly risen since then, according to U.S. Energy Information Administration, even when Trump was still in office.

In recent weeks, the biggest factor has been the cyberattack on the Colonial Pipeline. Even though it has been back in operation for nearly two weeks, many states, mostly in the South, still haven’t fully recovered.

Roughly one-quarter of gas stations in North and South Carolina and Georgia are without gas, according to GasBuddy.com, which tracks gas prices nationwide. In Florida, 9% of stations have run out and in Tennessee, it’s 14%. Overall, more than 6,000 stations have run out, Gas Buddy’s Patrick DeHaan says.

Prices have also increased because the economy has reopened much more quickly than most analysts expected. Stimulus payments to American households, including $1,400 checks that were distributed in March, have helped Americans ramp up spending.

Also noteworthy is while gas prices are at their highest level in six years, oil prices are still slightly below where they were in 2018. That suggests oil supplies are adequate and the refining and distribution of gasoline — through such networks as the Colonial Pipeline — are the problem.

RONNA MCDANIEL, head of the Republican National Committee: “… Lumber prices have increased 400%. We have real problems … (House Speaker Nancy) Pelosi will do anything not to talk about the Biden failures.” — tweet May 20.

THE FACTS: She’s also wrong to link rising lumber prices to Biden “failures.” This spike as well is related to rising demand and a sharp economic rebound.

At the start of the pandemic in March 2020, sawmills actually cut their output of lumber, anticipating that sales of new homes would slow, according to economists at TD Bank. Instead, Americans — and families in other countries — sought more room during the quarantine and bought new homes or sought to renovate. That pushed up demand for lumber, even as supply was reduced, sending lumber prices higher.

The National Association of Homebuilders has pointed to insufficient domestic production dating back to Trump for the increases.

“When prices began their historic rise in August 2020, NAHB reached out extensively to the Trump administration, members of Congress and to lumber mills calling for prompt action to address supply shortages that were harming small businesses, home builders and ultimately, the overall economy” and is continuing to do so under the Biden administration, according to the group’s website.

Some of the price gains in lumber and other commodities reflect strong consumer demand for goods like housing and cars, which is actually a good sign for the economy. Most officials at the Federal Reserve, the agency charged with keeping inflation in check, have repeatedly said that inflation will tick up as the country reopens, but the increases will likely be temporary, as supply bottlenecks are worked out.