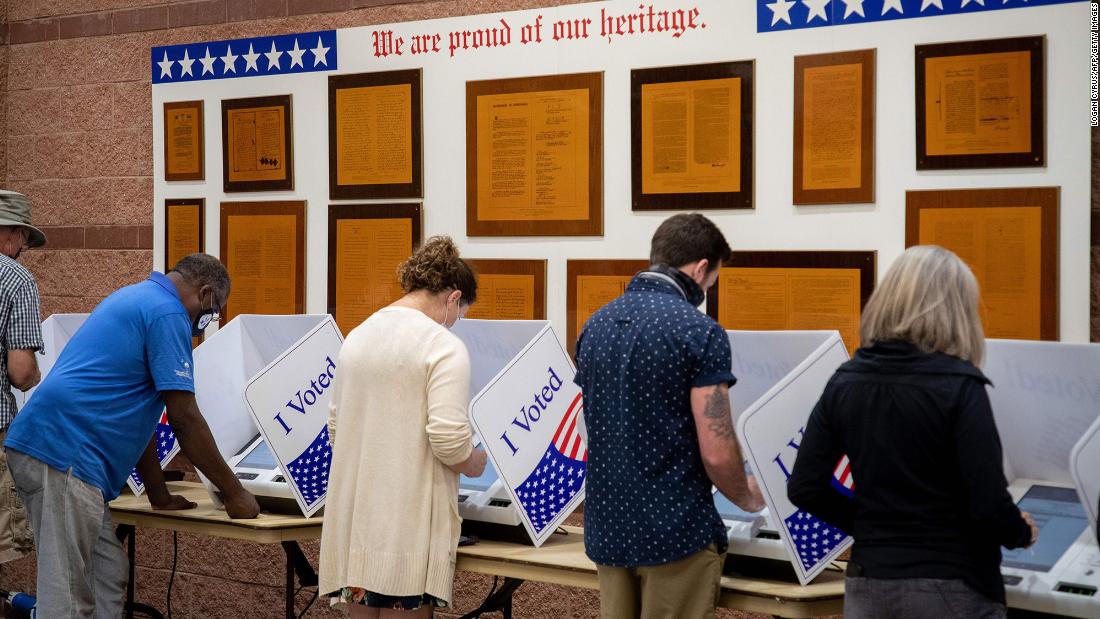 Yet, a look at the data also reveals that Biden’s Democratic Party has likely not picked up any support since the election. If historical trends hold, Democrats are likely going to face a rough political environment in the midterms.
One of the best ways to judge the political environment is through the generic congressional ballot. The generic ballot asks respondents some form of the following question: “If the elections for Congress were held today, would you vote for the Democratic or Republican Party?”
Democrats are ahead on that measure by about 4 points in the average poll taken since the beginning of Biden’s administration. That lead is about the same as the final margin in the 2020 presidential race (Biden +4.5 points) and the 2020 House popular vote (Democrats +3.1 points).
This tends to line up with what we have seen in terms of party identification from the average pollster: the Democrats’ advantage has been steady since the election.
Remember too that the 2020 polls tended to overestimate the Republican position. This means Republicans are actually doing better on the generic ballot now than they were heading into the 2020 election.
Additionally, the types of voters who will be casting a ballot in 2022 will likely be more favorably disposed to the GOP than the overall voting population (or those that cast a ballot in either 2018 or 2020). The reason is that when there is a Democrat in the White House, Republicans have traditionally had a turnout advantage.
A study I did back in 2018 revealed that voters who turned out in midterms with Democratic presidents in office were more Republican leaning than registered voters at-large in every midterm since 1978. On average in these midterms, the gap between the registered voter and actual electorate has been about 5 points more Republican among the actual electorate.
Just applying that shift to the polling now, it’s not hard to imagine that Republicans may already have an advantage with the voters who will turnout next year.
Of course, it is possible that this cycle will be different. Trump may have changed who turns out permanently. With the Democratic base increasingly made up of more college educated voters (and college educated voters being the most likely to turnout), the Republican advantage in turnout this midterm may be smaller than what we’re used to seeing.
Still, it’s likely that there will be at least some movement toward the Republicans in the national political environment between now and next November.
The party not in control of the White House has done worse in the national House vote than they were doing on the generic ballot at this point in 12 of 14 midterm elections for which we have polling at this point. The only exceptions were the 1974 cycle, when the Democrats (the party not in the White House) already had a large lead, and the 2002 cycle, when the polling at this point couldn’t take into account the 9/11 attacks that would occur in September 2001.
Indeed, once you control for who controls the White House, there is a surprisingly strong correlation between the generic congressional ballot 19 months before the midterm elections and the eventual House result.
If trends hold, the most likely national House result in 2022 given the current generic ballot is Republicans winning by between 4 and 5 points.
While we don’t know how redistricting will change things in terms of what type of advantage Democrats will need in the national vote to hold onto the House, any Republican advantage in the popular vote would probably be enough to take the House.
Still, there is a plus or minus 9-point margin of error associated with this estimate, so the Democrats’ current advantage could conceivably hold until November 2022. Such a wide margin of error shouldn’t be surprising given we’re a long ways from the midterm election.
A lot of things can still happen.
But this data makes clear that it would take a historical anomaly for Republicans not to gain ground in the midterms. The party not in the White House has picked up seats in every midterm except three in the last 150 years. The current generic ballot suggests we’re likely to see a repeat of this trend.