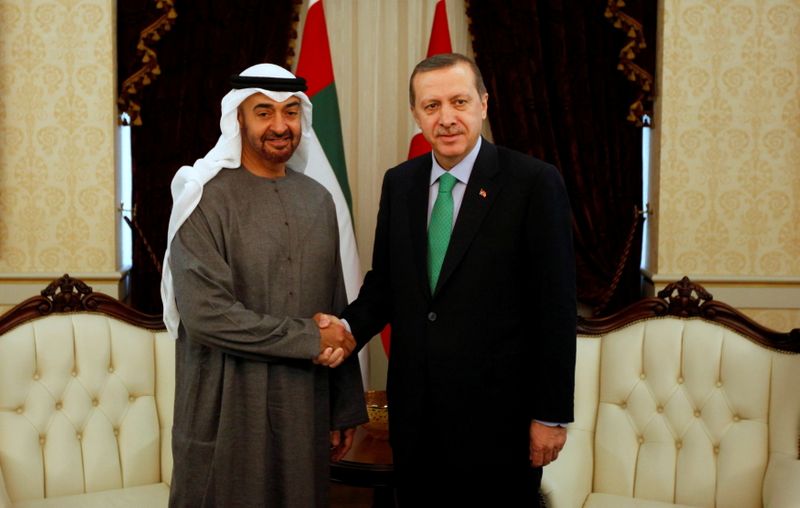 By Orhan Coskun and Alexander Cornwell

ANKARA (Reuters) – A truce between bitter regional rivals Turkey and the United Arab Emirates has calmed tensions that fuelled conflicts including Libya’s war, officials and diplomats say, after years of animosity and insults.

But with political differences still running deep, the two countries are expected to focus on building economic ties and de-escalating, rather than resolving, an ideological rift that has drawn a faultline through the Middle East.

Erdogan, who a year ago said Turkey could cut diplomatic relations with Abu Dhabi after it set up ties with Israel, also discussed UAE investment in Turkey with Abu Dhabi’s national security adviser.

“The UAE is interested in exploring prospects of reinforcing ties,” an Emirati official said, pointing to trade and investment opportunities in transportation, health and energy.

The talks follow earlier efforts by Turkey to ease tensions with UAE allies Saudi Arabia and Egypt, with a delegation from Cairo due in Ankara on Tuesday. Those contacts have so far yielded little, but some see the UAE track moving more swiftly.

“It’s going very fast,” said a diplomat in the Gulf. “Faster than many people thought it would. They have turned the page.”

A senior Turkish official described Erdogan’s call last week with Sheikh Mohammed as a significant move towards overcoming disputes which have plagued their relations, saying the two countries could work together in the Middle East.

“But first there will be steps taken in terms of the economy,” the official said. Other issues “are not agreed, but a desire was formed (to tackle) the large part of these problems.”

The rift stems from the Arab uprisings, when Turkey backed the Muslim Brotherhood and their Islamist allies challenging entrenched autocrats from Tunisia to Syria – alarming the UAE’s dynastic rulers, who see the Brotherhood as a political and security threat.

Turkey also sided with Qatar in a Gulf dispute, putting it at odds with the UAE, Saudi Arabia and Egypt, while Turkish support last year helped Libya’s U.N.-backed government drive back UAE-supported forces trying to seize the capital.

The two countries have traded accusations of interference https://www.reuters.com/article/us-libya-security-turkey-emirates-idUSKBN22O2CF beyond their borders, and Erdogan once chided the UAE’s foreign minister https://www.reuters.com/article/us-turkey-emirates-medina-idUSKBN1EF1U2 as an impudent nouveau riche when he retweeted comments critical of Ottoman forces – forebears of modern Turkey.

In Somalia, Turkey and the UAE have competed for influence https://www.reuters.com/article/us-somalia-gulf-analysis-idUSKBN1I23B4. In Syria, Turkey still supports fighters opposed to President Bashar al-Assad while the UAE, which once backed rebels fighting him, has opened an embassy in Damascus https://www.reuters.com/article/us-mideast-crisis-syria-emirates-idUSKCN1OQ0QV.

Turkish officials and Gulf diplomats say both countries recognise their geopolitical tensions came at an economic price, heightened by the COVID-19 pandemic.

That cost was felt particularly by Erdogan in Turkey, where stubbornly high 19% inflation has driven up the cost of living and where state banks sold $128 billion in foreign reserves last year in an attempt to support the tumbling lira.

“The cost of strained ties is not sustainable in the region when it comes to Turkey, the UAE and Saudi Arabia,” a second Turkish official said, speaking on condition of anonymity.

The departure of U.S. President Donald Trump removed a leader who emboldened their rival regional interventions.

Although no agreement has been announced on investments, the two countries already have an economic platform to build on.

Political differences will be harder to overcome, with Egypt and its Gulf allies insistent that Ankara pull out troops and Turkey-backed Syrian fighters from Libya, a demand which diplomats say is a priority for Cairo and its allies.

Nevertheless, a decade on from the “Arab Spring” the revolutions are mostly over and the Muslim Brotherhood has been weakened – easing two of Abu Dhabi’s main sources of friction with Erdogan, who strongly backed Brotherhood figures.

“For Saudi Arabia and the UAE this is not the priority file that it used to be,” said Galip Dalay, a fellow at the Robert Bosch Academy in Berlin.

In a gesture to Cairo earlier this year, which would also have been noted in Riyadh and Abu Dhabi, Turkey asked Egyptian opposition channels including Muslim Brotherhood and Islamist-leaning broadcasters, to tone down criticism of Egypt https://www.reuters.com/article/us-turkey-egypt-idUSKBN2BB228.

Turkey still blocks access to the websites of some UAE organisations, including the state news agency, but the government has halted what was once a regular barrage of criticism directed at the UAE, Saudi Arabia and Egypt.

“There is a desire on both sides to de-escalate, and see what happens,” Dalay said.

(Reporting by Orhan Coskun in Ankara and Alexander Cornwell and Aziz El Yaakoubi in Dubai; Additional reporting by Tuvan Gumrukcu in Ankara; Writing by Dominic Evans; Editing by Andrew Heavens)