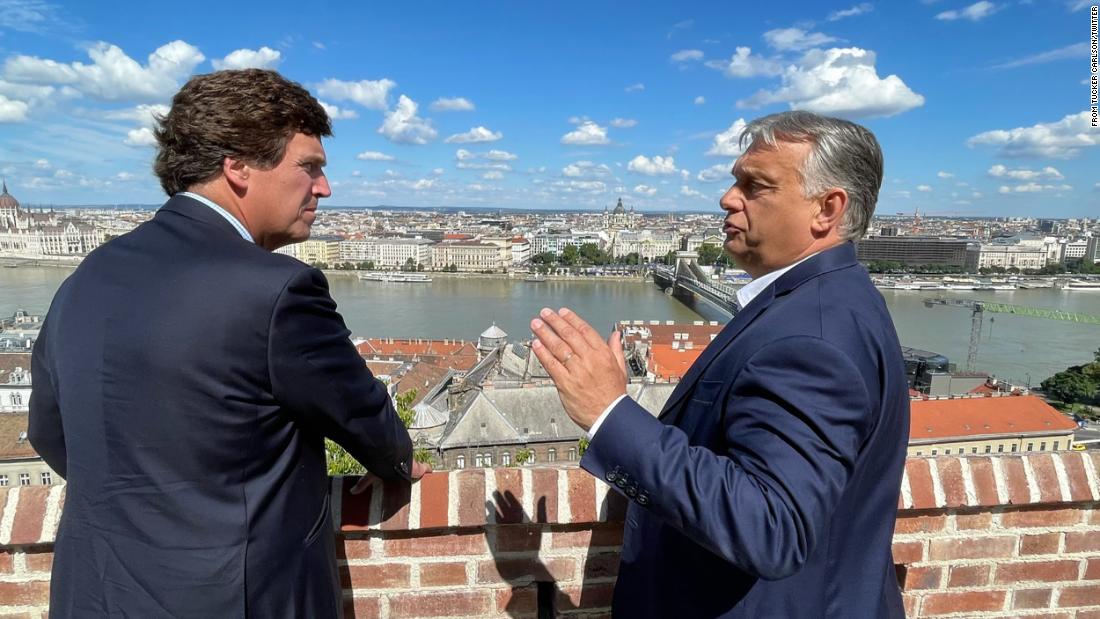 I am just as tired of writing about Tucker Carlson as I am sure you are of reading about him. But what he is doing this week, broadcasting his show in Budapest while casting Hungarian autocrat Viktor Orbán in a positive light, matters. It cannot be ignored.
NY Mag’s Jonathan Chait articulated why superbly in his Wednesday piece. Carlson “is laying down a marker in the highest profile way he can that Orbán’s iron fist is the future the Republican party should want.” Chait went on to write that “the splashy imprimatur of a Fox News prime-time personality, who is probably the right’s most influential media figure, is an important milestone in the Republican Party’s long evolution into authoritarianism.”
“What makes this alliance especially chilling is that Hungary is the model of democratic backsliding that has loomed largest in their imaginations of internationalist thinkers,” Chait added. “Orbán’s corruption of a former democracy occurred step by step.”
Which is to say that the democratic backsliding wasn’t the culmination of a sudden revolution or single appreciable event. Instead, it slowly occurred — in gradual steps — over a period of time. Sound familiar? Well, if it doesn’t, Chait spelled it out in black and white for you: “If America ceases to be a democracy,” Chait wrote, “it will likely follow a path similar to Orbán’s.”

Carlson’s “mid-summer jaunt” to the autocratic state was the subject of John Avlon’s must-watch “Reality Check” on Wednesday. Avlon warned about the danger in Carlson “opening the Overton window” to Orbán’s brand of authoritarian nationalism. “This is the equivalent of some liberal opinion host decamping to Venezuela for fawning sit-downs with Nicholas Maduro,” Avlon said, pointing out that if a liberal host engaged in such activity they’d be “rightly savaged.”
“Tucker’s travels are only news outside of his echo-chamber,” Avlon explained, “because they aspire to celebrate and normalize a sustained assault on democracy from a position of aggressive defensiveness…”

On his show Wednesday night, Carlson again played up Orbán, this time praising his hardline immigration policies. Carlson said he went down to the Hungarian border and saw “order and clarity,” declaring that Orbán’s wall “works.” Carlson said when talking to Hungarian officials on the border, he found it “embarrassing to be an American.” And he implored the US to follow Orbán’s lead on immigration, all while mocking those critical of him…

Meanwhile, he is noticeably not pointing this out

Over at The Washington Post, columnist Ishaan Tharoor pointed out a glaring omission from Carlson’s coverage thus far. Carlson, Tharoor observed, “has said next to nothing about the autocratic character of Orban’s rule, which critics on both sides of the Atlantic cast as a cautionary tale of how democracies backslide.”

For his “Reality Check” piece, Avlon reached out to Garry Kasparov, founder of the Renew Democracy Initiative. “Unsatisfied with Trump’s attacks on democracy in the United States, Carlson went looking for a more successful model in Orbán’s Hungary,” Kasparov bluntly told him. “I’m sure Tucker can pick up some useful tips there to bring home about crushing an independent judiciary, attacking the free press, and hijacking elections…”