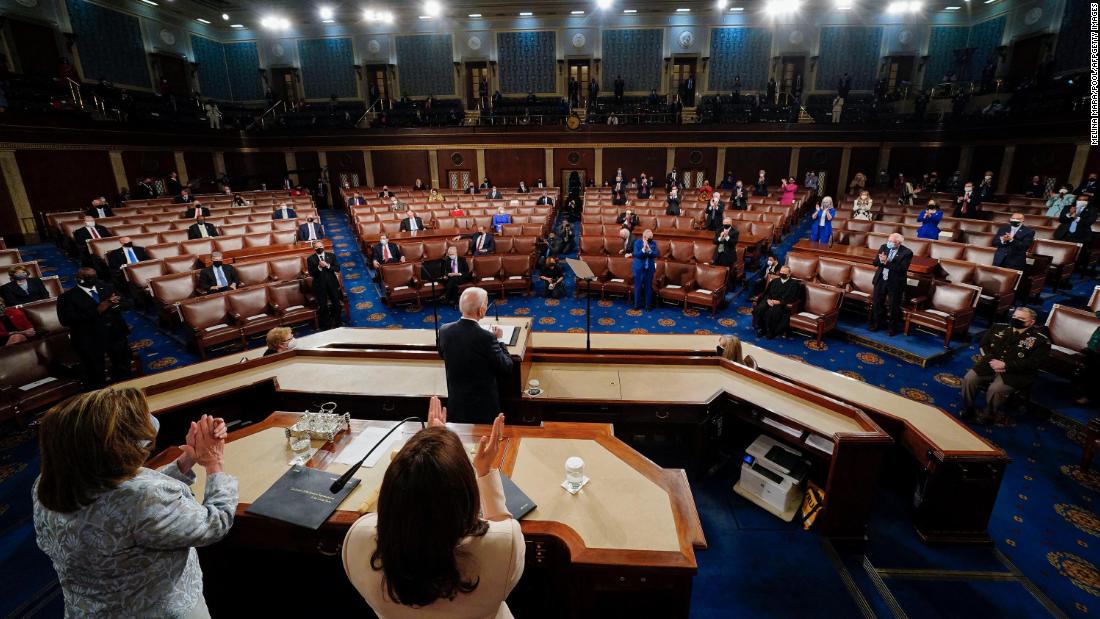 There are those words: “My fellow Americans, trickle-down, trickle-down economics has never worked.”
With that simple sentence, Biden sought to officially close the book on the dominant economic theory of the last 40ish years: That success by affluent people at the top of the economy would, eventually, trickle down to the average American. It’s been the theory behind every major tax cut pushed by Republican presidents since Ronald Reagan — including Donald Trump’s 2017 cut — and is so closely associated with our 40th president that the economic idea is known colloquially as “Reaganomics.”
The idea was made popular by Reagan who, in the teeth of a recession, delivered a speech to the country in February 1981 in which he made the argument that the way to revive the economy was by shrinking government and returning more money to individuals — especially wealthy ones — who would, in turn, drive a top-down economic comeback.
Here’s the key bit from that speech:
“Since 1960, our government has spent $5.1 trillion. Our debt has grown by $648 billion. Prices have exploded by 178%. How much better off are we for all that? Well, we all know we’re very much worse off. When we measure how harshly these years of inflation, lower productivity, and uncontrolled government growth have affected our lives, we know we must act and act now …
” … We can create the incentives which take advantage of the genius of our economic system — a system, as Walter Lippmann observed more than 40 years ago, which for the first time in history gave men “a way of producing wealth in which the good fortune of others multiplied their own.”
“Our aim is to increase our national wealth so all will have more, not just redistribute what we already have, which is just a sharing of scarcity. We can begin to reward hard work and risk-taking, by forcing this government to live within its means.”
Within months, Congress had passed — and Reagan had signed — a massive tax cut measure that drastically lowered the marginal tax rate for individuals. The subsequent uptick in the economy, which lasted throughout the 1980s, was widely credited to “Reaganomics.”
So pervasive was the belief that a small federal government — and tax cuts for the wealthy — was the recipe for economic success that Democratic President Bill Clinton declared that “the era of big government is over” in the mid-1990s as a way to signal to independents and Republicans that he understood that government was, if not the enemy, than an enemy.
(Sidebar: It’s not at all clear that Reaganomics, well, worked. As David Wessel, a senior economics fellow at Brookings, wrote in 2017: “The Reagan tax cut was huge. The top rate fell from 70 percent to 50 percent. The tax cut didn’t pay for itself. According to later Treasury estimates, it reduced federal revenues by about 9 percent in the first couple of years. In fact, most of the top Reagan administration officials didn’t think the tax cut would pay for itself. They were counting on spending cuts to avoid blowing up the deficit. But they never materialized.”)
Which is what makes what Biden said on Wednesday night matter so much. In the biggest speech of his (admittedly young) presidency, he stated, without hesitation, that Reaganomics never worked. That incentivizing the wealthy with tax cuts never trickled down. And that the way that you build a healthy economy is not top-down but bottom-up — and with a major assist from the federal government.
“It’s time to grow the economy from the bottom and the middle out,” Biden said directly after declaring trickle-down’s death.
It’s far more than just words for Biden. The defining trait of the actions he has taken in his first 100 days in office, as I noted earlier this month, is a belief that government not only can solve problems for average people, but must do so.
Including the proposals outlined in Wednesday speech, Biden has proposed $6 trillion in new spending by the federal government in his first 100 days in office.
And he has done so unapologetically. Touting the $2 trillion he wants Congress to approve in infrastructure spending, Biden called it a “once-in-a-generation investment in America, unlike anything we’ve seen or done since we built the Interstate Highway System and the Space Race decades ago.”
Biden’s belief is that the combination of Donald Trump’s presidency and the Covid-19 pandemic have reminded people that government isn’t a bad thing — and can be a very good thing. That, confronted with the fragility of our well-being — economic, physical, mental — the idea of the government helping to build a social safety net will be appealing once again.
“We have to prove democracy still works,” Biden said in Wednesday speech. “That our government still works — and can deliver for the people.”
He has bet his presidency on just that idea.