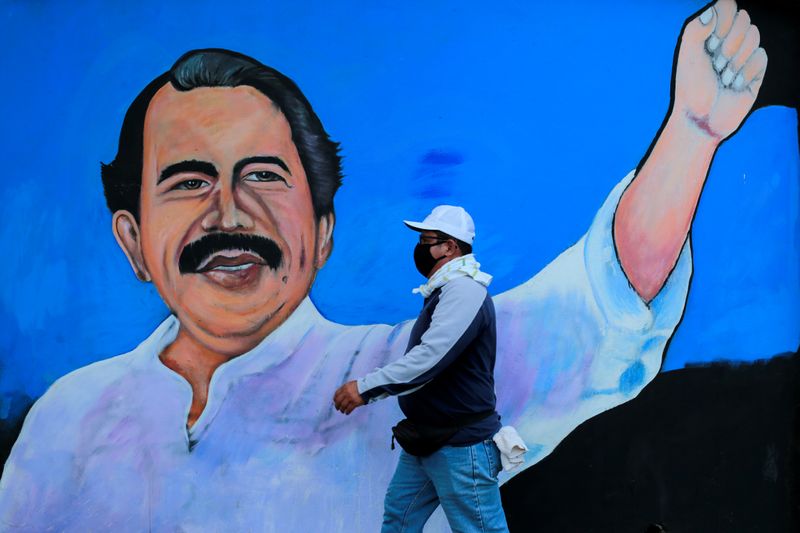 SAN JOSE (Reuters) – U.S. President Joe Biden’s efforts to tackle migration from Central America by promoting the rule of law took a hit with the contentious re-election of Nicaraguan President Daniel Ortega, the clearest example yet of the region’s democratic drift.

Ortega’s election https://www.reuters.com/world/americas/nicaraguas-ortega-coasting-victory-after-contentious-election-2021-11-08 on Sunday for a fourth straight term followed the arrests of political rivals and closing down of political parties in recent months.

U.S. sanctions and calls for a free vote had little effect. Ortega – a former left-wing guerrilla who fought Washington-backed right-wing ‘Contra’ insurgents in the 1980s – accused his opponents of being U.S. pawns.

A similar disconnect is visible elsewhere. In El Salvador, Honduras and Guatemala, collectively known as the Northern Triangle, government allies have undermined, fired or transferred prosecutors and judges backed by Washington.

There is “some frustration” within Biden’s government over this resistance to its efforts to promote anti-corruption measures and good governance in the region, said one U.S. official inside the administration.

Under Biden, the United States has identified weak governance as a root cause of migration from Central America, a long-term policy challenge to be tackled at the same time as managing record flows of migrants in the short term.

A senior State Department official said that “we definitely were not surprised” by the pushback from Central American governments and acknowledged the region was going through a “tough moment,” including the COVID-19 pandemic and other “destabilizing” events.

The official, speaking on condition of anonymity, insisted the administration would stick to its multi-year, multibillion-dollar plan to address the short- and long-term migration issues.

Laura Chinchilla, former president of Costa Rica, said that Central America was passing through its most delicate moment since Cold War civil wars rocked the region in the 1980s, with Washington’s policy focus “swallowed up” by the migration issue.

“(Former U.S. presidents) Obama and Trump failed because they had quite limited perspectives on security and migration, and lacked a more comprehensive approach,” she said.

Nearly 10 months into the Biden administration, and with numbers of migrants arrested at the U.S.-Mexico border at record levels https://www.reuters.com/world/us/biden-under-pressure-us-mexico-border-arrests-reach-record-highs-2021-10-20, it was still unclear if actions would back up new promises for the region, Chinchilla added.

The situation, uncomfortable for a superpower used to getting its way in Central America, reflects a loss of leadership after the administration of President Donald Trump reduced the emphasis on democratic values, said Tiziano Breda of International Crisis Group, a think tank looking at conflict globally.

“It will take more than strong statements and public shaming, etc., to overturn this trend,” Breda said.

It also potentially reveals a weak spot in U.S. strategy towards the region. As shown by the Trump presidency, effective Republican swipes at Biden over border management can be a make-or-break issue in U.S. politics.

Central American governments may be using this reality as leverage, calculating there is only so far the United States will be willing to push for fear of losing cooperation on immigration, said Jose Miguel Vivanco of advocacy group Human Rights Watch.

They also appear to be learning from each other that the consequences of backsliding on issues such as the separation of branches of government are not unbearable, analysts say.

The State Department official expressed the administration’s concern that other Central American “actors” could feel emboldened by Ortega’s strategy.

But the official denied that Central American governments were using U.S. concerns over migration as leverage to push back on governance: “That’s not what we’re seeing.”

“These governments cooperate with us on migration because it’s in their national interest as well,” the person said.

For Ryan Berg, a researcher at the Center for Strategic and International Studies, a foreign policy think tank, Ortega was offering a “playbook… for other wannabe authoritarians in Central America.”

“We fear that if there’s no cost for what happened in Nicaragua… if there’s no regional response to these events, then it could happen in other countries,” said U.S. special envoy for Central America Ricardo Zuniga to reporters on Tuesday.

In El Salvador, President Nayib Bukele has stoked concerns https://www.reuters.com/world/americas/thousands-protest-el-salvador-against-bukele-government-2021-10-17 that he is steadily concentrating power. Supreme Court judges appointed by his party recently ruled that the president could seek a second consecutive term, contrary to the constitution, and Bukele has sent troops into the parliament to press for legislation.

“Relations with El Salvador are not solid,” Jean Manes, the U.S. charge d’affaires ad interim told reporters on Monday. “We simply can’t look away when there’s a decline in democracy.”

Government representatives for El Salvador, Guatemala and Honduras did not immediately respond to requests for comment. They have each in the past warned that U.S. pressure over their domestic decisions has the potential to put at risk progress on common policy goals.