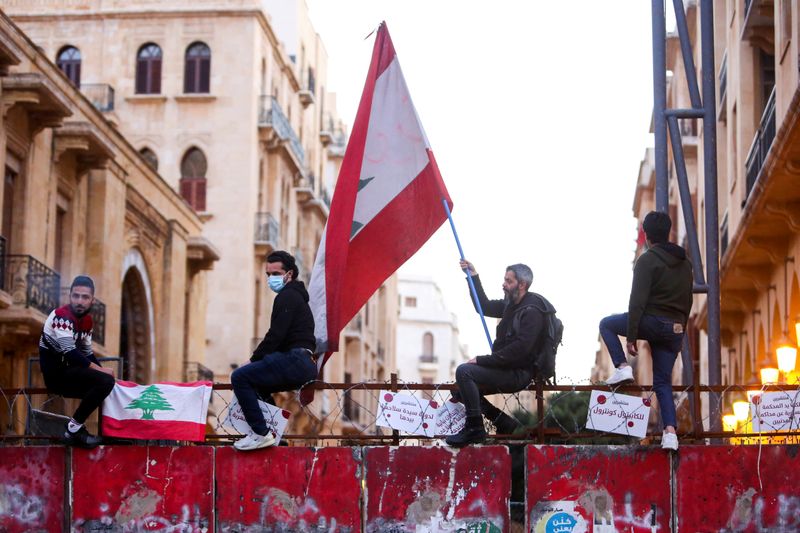 FILE PHOTO: A demonstrator holds a Lebanese flag during a protest against the fall in Lebanese pound currency and mounting economic hardships, in Beirut, Lebanon March 12, 2021. REUTERS/Aziz Taher/File Photo

BEIRUT (Reuters) – Just 18 months have passed since mass protests against Lebanon’s political class brought down one government, and nearly eight more months since a huge explosion destroyed the port of Beirut and toppled its successor.

Since then the currency has lost 90 per cent of its value, inflation has driven more than half the population below the poverty line, the country has defaulted on its debts, and banks have all but cut clients off from their dollar deposits.

A vibrant Beirut has turned into a ghost-town in eerie darkness, as the outgoing energy minister warns that a total black-out is looming as fuel for electricity runs out.

Yet even as Lebanon hurtles towards outright collapse, in the worst crisis since the 1975-1990 civil war, bickering politicians are either unwilling or unable to form a government.

Saad al-Hariri, the Sunni Muslim three-time prime minister designated by parliament to form a cabinet, stormed out of his 18th meeting with President Michel Aoun this week. He said Aoun’s Christian party, led by the president’s son-in-law Gebran Bassil, wanted to dictate cabinet seats and have veto power over decisions.

“As of today you have to satisfy Gebran Bassil’s conditions; he has the pen of the president,” said one government source.

Hariri, son of Rafik al-Hariri, the post-war premier assassinated in 2005, has called for a technocrat cabinet that must enact reforms long demanded by the IMF and donor countries such as the United States and France. He is backed by the Shi’ite Amal party, led by influential House Speaker Nabih Berri and others.

Overshadowing what might otherwise look like a sectarian squabble over sharing the diminishing pie of Lebanon’s spoils system is the power of Hezbollah, the Iran-backed Shi’ite group that dominates Lebanon politics and underpins Aoun’s presidency.

Like other Arab countries such as Iraq and Syria, Lebanon has long been an arena of proxy competition between Shi’ite Iran and Sunni Saudi Arabia, with traditionally influential Christians divided between the two.

With a new administration in Washington reassessing policy towards Iran, the regional balance of power is shifting. For now, Hezbollah, as Iran’s main client, appears reluctant to back a new governmnent that might be seen as offering a concession to Saudi- and Western-backed rivals such as Hariri.

While it agrees on the need for a government, Hezbollah is not ready to pressure Aoun and risk its alliance with his large Christian party.

The most optimistic scenario would see a capable government, able to regain local and international confidence, and implement reforms international lenders have demanded, such as an overhaul of the wasteful power sector, audit of the central bank and restructuring of the bloated public sector.

“Everyone knows what fiscal and monetary reforms are needed,” a senior official source told Reuters.

The pessimistic scenario would see a further collapse in the pound and plummeting economic growth, already measured at minus 25% of GDP by the IMF last year and minus 19% of GDP by the World Bank.

The economy is shrinking so fast it is difficult to measure precisely, but on present trends this year’s contraction is set to be around 10% of GDP, the source said.

Some officials, diplomats and politicians are inclined towards pessimism: “I don’t think the parties want a solution,” the senior official source said.

“It’s not so important who the prime minister is, what matters is the criteria and implementation, regaining confidence and credibility,” he said. “The current government started by persuading the parties to go to the IMF (and) any successor government will have to do the same. They have no choice.”

As long as the paralysis continues, it is hard to fathom how bad the situation can get. Dan Azzi, former chief executive of Standard Chartered Bank in Lebanon, said a scenario could evolve in which the currency tumbles further, all basic functions of government cease to exist and chaos spreads.

“If we continue like this…total control will be lost on society. This means you are driving down a road and someone with a weapon can stop you kill you, take your car, money and wife.”

While Hariri blames Aoun’s demands for holding up a government, the president has so far remained intransigent.

Sources who meet Aoun quote him as saying he is not responsible for the financial crisis: as power has been held for most of the last three decades by Hariri, Hariri’s father and Berri, they should be the ones making concessions, the president believes.

The sources say Aoun’s attitude has hardened since Washington imposed sanctions on his son-in-law Bassil, the man he was grooming as a contender for president.

“There is total change. He’s not ready to make any concessions at all,” one visitor said.

The scale of financial losses and a planned audit of state finances turned into a point of friction in Lebanon last year, bringing IMF talks to a halt, as top bankers and lawmakers torpedoed the outgoing government’s draft recovery plan.

Western donors have made clear they won’t bail out Lebanon without reforms to tackle enshrined corruption and the crushing debt, and revive IMF talks.

Gulf Arab states that once funnelled money to Lebanon have shut the taps, wary of the expanding role of Iran’s client Hezbollah.

Despite the meltdown, the parties that form the ruling elite appear more concerned with securing seats in next year’s parliamentary elections than enacting reforms, diplomats and sources close to power say.

“For them it’s a political game. It’s about who’s going to win. The total collapse, the economic and social costs are not a priority for them. It’s a battle of existence for them, they think they can discuss the costs later,” a source close to government sources said.

“They think they can last a bit longer – but nobody knows where the breaking point is,” added another political source.