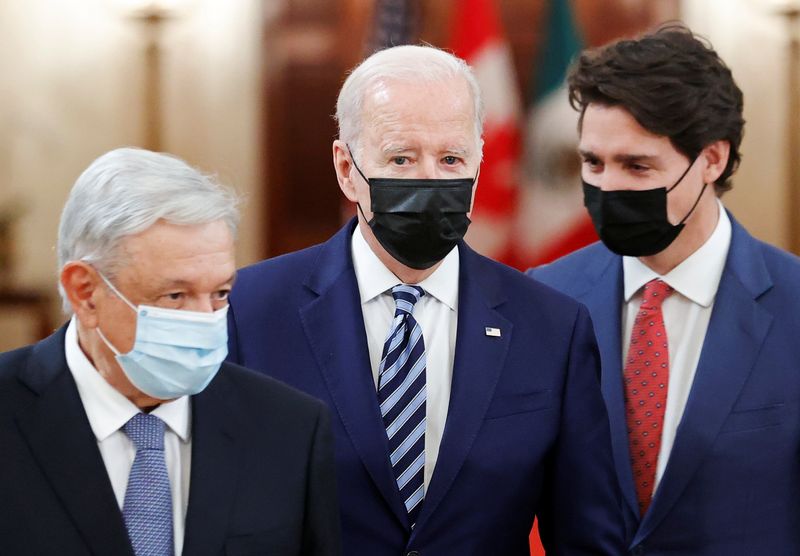 WASHINGTON/OTTAWA/MEXICO CITY (Reuters) – When U.S. President Joe Biden gathered the leaders of his closest neighbors at the White House on Thursday, far-off rival China was top of mind.

Trying to unify a collection of democracies to challenge China’s growing economic and military clout, Biden has revived the so-called Three Amigos working group ditched by his predecessor Donald Trump.

While he did not say the word “China” in front of reporters, aides said the emphasis of his private meetings was on policies designed to counter a country that by some estimates could overtake the United States as the world’s largest economy within a decade.

On Thursday, Biden, Canadian Prime Minister Justin Trudeau and Mexican President Andres Manuel Lopez Obrador agreed to donate millions in vaccines to third countries, work together to fix their dependency on broken supply chains, and to prohibit imports of goods made with forced labor, which the United States says China uses in its northwestern Xinjiang region. Beijing denies it.

The three leaders also suggested it was time to reverse the trend of decades of global trade and claw back manufacturing from China.

“It’s a paradox that there’s so much money in North America and the Pacific ports are saturated with goods from Asia,” Lopez Obrador said. “Why can’t we produce in North America what we consume?”

Economic integration between the three countries, which make up 28% of global gross domestic product, is the best way to stave off competition from China and an “unacceptable imbalance” that “would keep alive the temptation of trying to resolve this disparity by use of force,” Lopez Obrador said.

Under Biden, Washington is the leading supplier of vaccines to the world as it works to jumpstart infrastructure development abroad and secure the raw minerals and supplies it needs to be a leader in electric vehicles.

In each case, China has a rival program, including its Belt and Road infrastructure initiative.

The new effort under Biden, a Democrat, marks another sharp departure from Republican Trump’s “America First” policies that rubbed some traditional allies of Washington the wrong way.

The economies of Canada, Mexico and the United States have been tightly bound since the 1994 implementation of the North American Free Trade Agreement, which was later replaced by a similar deal negotiated under Trump.

One rationale for the original deal was that North American trade on fair and open terms would make all three richer, more integrated and prepare them to better compete worldwide, including with an ascendant China.

In the years that followed, China was the clear winner. Beijing expanded its market access with its 2001 entry into the World Trade Organization and the United States became dependent on Chinese exports, while manufacturing jobs migrated to China and other low-cost areas including Mexico.

Many lawmakers from both parties now regard that level of dependence on China as a mistake. Since the COVID-19 outbreak, the United States has faced shortages of goods ranging from masks to meat and computer chips, some of which are dependent on manufacturing or raw materials from East Asia.

Shortages this year have contributed to inflation and Americans’ deteriorating view of Biden’s handling of the economy.

In viewing China as a rival, Biden has natural allies in Canada and Mexico.

Since the end of a three-year standoff over the arrest https://www.reuters.com/world/china/china-welcomes-huawei-executive-home-silent-freed-canadians-2021-09-25 of a Huawei Technologies Co executive in September, diplomatic exchanges between Canada and China have been tense.

Canada is promoting its wealth of critical minerals including rare earths used in electric vehicle batteries as a way to wean the West’s dependence on China.

“Many of those critical minerals have been cornered by … certain parts of the world that are somewhat less reliable these days,” Trudeau said on Wednesday in Washington.

On Thursday, Trudeau and Biden “underscored their commitment to supply chain security,” according to a statement after their meeting.

Lopez Obrador agreed, saying Mexican consumers are also waiting for cars or household appliances because of the semiconductor shortage.

“The new reality of the supply chains and logistical disruptions caused by COVID to international trade obviously means we have to give more priority to North America,” he said.

(Reporting by Trevor Hunnicutt in Washington, Steve Scherer in Ottawa and Dave Graham in Mexico City; Editing by Heather Timmons and Daniel Wallis)