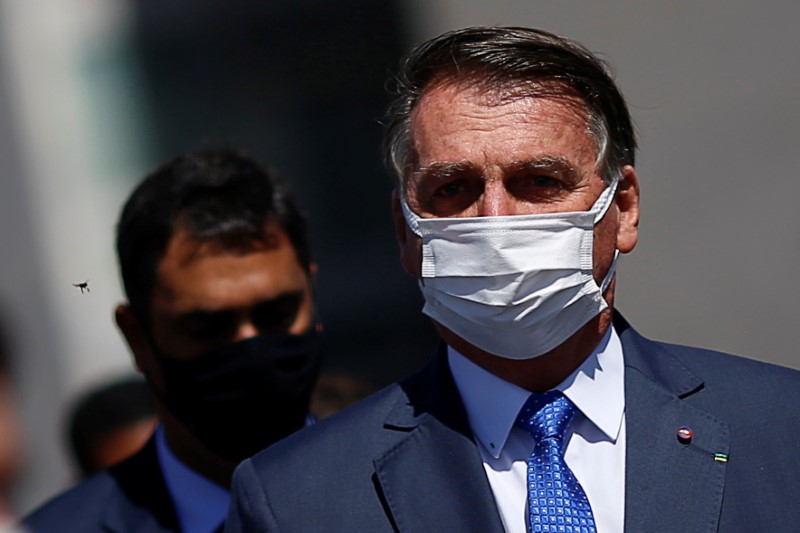 BRASILIA (Reuters) – The clouds of dark exhaust spewing from aging tanks and amphibious vehicles rolling past far-right President Jair Bolsonaro on Tuesday were a poor smoke screen for a leader whose political support is slipping and re-election is in trouble.

Politicians and analysts said this week’s unusual military display outside the presidential palace https://www.reuters.com/world/americas/brazil-military-parade-presidential-palace-rattles-politicians-2021-08-10 in Brasilia revealed not strength but rather the political weakness of a president on the ropes for failing to lead Brazil out of the coronavirus pandemic and an economic crisis.

“Bolsonaro imagines this is showing strength, but in fact it is showing all the weakness of a president cornered by corruption investigations and his administrative incompetence in the midst of a pandemic still out of control,” said Aziz, whose center-right PSD party had backed the president until last year.

On Tuesday, Bolsonaro failed to persuade the lower house of Congress to pass a constitutional amendment that would have ushered in a return to paper ballots in next year’s vote to address his unproven claims of electoral fraud. It was one of his top priorities, but it fell short by 79 votes.

Still, the sight of a commander in chief flaunting his martial powers on the day of a major vote hit a raw nerve in a country where a two-decade military dictatorship only ended in 1985.

“Whether the military intended this or not, this is terrible pressure on Congress,” said Carlos Melo, a politics professor at Sao Paulo’s Insper business school. “It is very bad for democracy.”

Bolsonaro, a former army captain, has filled his government with military personnel, including about a third of his cabinet. As his government ran into problems, antagonizing courts and lawmakers, he has increasingly leaned on the armed forces, among Brazil’s most respected institutions, to show their support.

In March, Bolsonaro fired his defense minister, who had resisted such a display according to people familiar with the matter, and replaced him with a general who had been serving as the presidential chief of staff.

The commanders of Brazil’s army, navy and air force resigned in protest at the president’s interference. Their replacements flanked Bolsonaro on Tuesday as the tanks filed passed.

The navy said the parade was planned long before the vote in the lower house of Congress was scheduled and it was meant to invite the president to an annual military exercise on Sunday.

There was no precedent for such an ostentatious invite to that annual event.

The presidential press office did not respond to questions about the display on the day of a major legislative defeat.

Former generals and military scholars insist that Brazil’s armed forces, humbled by the embarrassment of two decades of repressive military rule that followed a coup in 1964, would never disrupt the balance of powers in Brazil’s young democracy.

“The armed forces will respect the country’s constitution,” said retired cavalry general Paulo Chagas, a former Bolsonaro ally, in a message to Reuters.

Lula maintained cordial relations with Brazil’s armed forces as president from 2003 to 2010, but his Workers Party was later engulfed in corruption scandals and he was convicted of bribery, blocking his run for a third term in 2018.

This year, the Supreme Court threw out Lula’s convictions, clearing the way for him to run again for president. Opinion polls show he would handily defeat Bolsonaro if the election were held today, though neither has confirmed they will run.

As Bolsonaro’s poll numbers have slipped, he has grown increasingly critical of Brazil’s voting system, threatening not to respect the results of elections unless the votes are cast with paper.

For weeks, Bolsonaro has railed against Brazil’s electronic voting system on social media and near daily radio appearances. His critics says that, following the example of his political role model, former U.S. President Donald Trump, he is sowing doubts in case he loses the election.

“Bolsonaro is less concerned with ballot box security than with creating a consistent narrative of electoral fraud, spreading popular distrust in the electronic system,” said Guilherme Casaroes, a politics professor at the FGV think tank in Sao Paulo.

The military parade and recent marches with thousands of helmeted motor-bikes, Casaroes said, show that Bolsonaro depends on public shows of support in the absence of positive political or economic results.

Bolsonaro has also turned to more populist policies to shore up support, expanding social benefits for Brazil’s poorest families, which has investors worried about the fiscal burden.

“But the economy is not responding,” said Melo. “And actions like today’s military parade will not increase his popularity.”