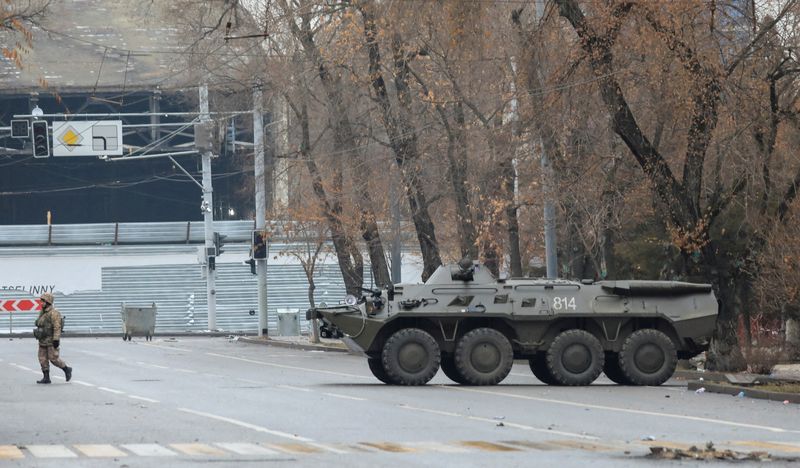 (Reuters) – The sudden and violent crisis in Kazakhstan has caught Russian President Vladimir Putin at a moment when his attention was firmly focused elsewhere and forced him into a military intervention that carries potential risks.

Putin immediately committed Russian paratroopers on Thursday as part of a peacekeeping force from former Soviet states requested by Kazakh President Kassym-Jomart Tokayev, who is facing the most dangerous wave of unrest since the Central Asian nation won independence from Moscow in 1991.

Russian and Western political analysts said the crisis would not shift Putin’s focus from Ukraine, where he has forced the West to the negotiating table by mobilising tens of thousands of Russian troops for what Kyiv and Washington say could be a possible invasion within weeks – something he denies.

But Kazakhstan presents at the very least an unwelcome temporary distraction as Russia prepares to open negotiations with the West next week over its demands for security guarantees to protect it from what it sees as threatening NATO behaviour.

Kazakh security forces appeared to be reasserting control on Friday after fuel price protests spiralled into days of violence across the vast country, with looting and the torching of public buildings.

But the potential for further bloodshed is clear.

Tokayev said in a televised address that the state would fight “to the end” against what he called bandits and terrorists, and said he had issued shoot-to-kill orders to his security forces.

The size of the task facing the 2,500 peacekeepers from Russia, Armenia, Belarus, Kyrgyzstan and Tajikistan – and whether it can be completed within days or weeks, as intended – is not yet clear.

“The best mission for Moscow’s got to be: you go in, you look big and strong standing in visible places and you never actually have to do anything. There’s nothing to be gained from shooting at another country’s population,” said Sam Greene, director of the Russia Institute at King’s College, London.

But even a successful intervention could leave in place an unpopular government, risk fuelling anti-Russian sentiment and fail to address the underlying causes of the unrest, he said.

Russia had presumably calculated that failure to act would risk a worse outcome, namely the fall of Tokayev and the emergence of a power vacuum in Kazakhstan, Greene said.

But there is also potential upside for the Kremlin in extending a series of strategic interventions it has carried out in former Soviet states since 2020.

In Belarus, it propped up authoritarian leader Alexander Lukashenko when mass protests threatened to topple him, and since then has used that country’s territory and airspace to stage high-profile military drills and strategic bomber flights near the borders of NATO member countries.

In the Caucasus, Putin brought about a ceasefire in a 2020 war between Armenia and Azerbaijan and sent in peacekeepers, ensuring Russia would remain the key security player in a region where Turkey and Iran also compete for influence.

Now Kazakhstan, the world’s top producer of uranium and ninth biggest oil exporter, looks set to become increasingly beholden to Moscow. Tokayev made a point in his televised address on Friday of thanking Putin for his rapid support.

“For Russia, if things do settle down, it will be a substantial win, demonstrating how critical it remains, and also tethering Kazakhstan to it that much more,” said Olga Oliker, Europe and Central Asia program director at Crisis Group.

Jonathan Eyal of the RUSI think-tank in London said Putin could achieve a further important advantage vis-a-vis China by reasserting Russia as the security guarantor of the Central Asian states, even if he could not hope to match Beijing’s economic influence in the region.

“Of course Russia is delighted to have supreme control in security terms in Central Asia. That goes to the narrative of Putin as a sort of re-creator of the Soviet Union,” Eyal said.

Ukraine, however, remains the bigger concern.

Kazakhstan “might distract attention from Ukraine at least for some time because definitely it’s a serious crisis which should require attention and focus from the Russian side. But I don’t think it would completely take Ukraine off the table,” said Andrey Kortunov, head of the Russian International Affairs Council.

“I think this issue remains a top priority and it will be still an issue that they would like to discuss with the West, no matter what happens in Kazakhstan.”