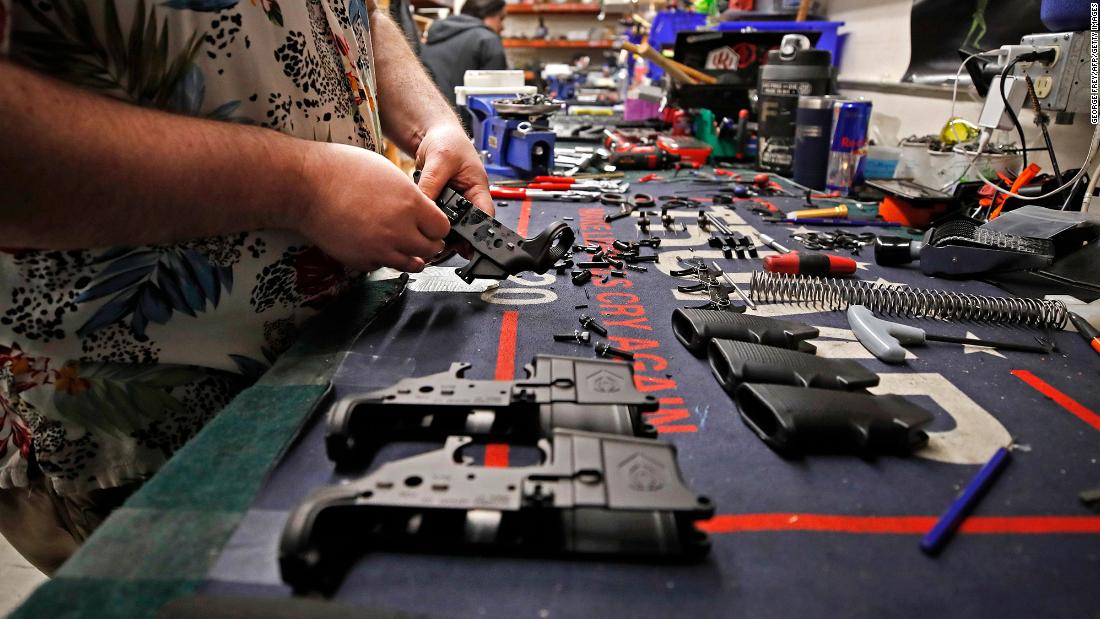 But in today’s interconnected global world of easily manufactured weapons and easily transmitted disease, protecting freedoms is coming at an ever greater cost.
We’re used to thinking of the fight for freedom in terms of wars fought abroad, like the long fight in Afghanistan.
But America’s longest war isn’t in Afghanistan, it’s right here at home.
Far more deadly and uniquely American than any military conflict, the US gun war is raging in US cities and suburbs, in schools, and offices, at churches and grocery stores.
Americans who didn’t volunteer for duty are on the front lines and dying for your freedoms every single day.
The latest battlefield erupted in Indianapolis Thursday night, where eight people were gunned down in a few minutes at a FedEx facility.
The “liberty” promised by the Declaration of Independence is interfering with the “life” and the “pursuit of happiness” in ways the Founding Fathers could never have imagined.
Given the choice, with help from conservative courts and Second Amendment true believers, the country is choosing personal freedom over public safety, giving some of its people a feeling of liberty, but also causing many people to die in the process.

‘National embarrassment,’ but not necessarily the next priority

Biden called the endless roll of mass shootings “a national embarrassment” at a Friday afternoon news conference, but he pushed back on a question about his administration prioritizing infrastructure over pushing for new gun control, calling on Congress to act. “It doesn’t mean that I can’t also be working at the same time on the economy and on Covid, but it’s not a question of my being able to set the agenda in the Senate as to what they will move to first.”
In today’s US, where everything seems like a partisan, political fight, the subject might be Covid restrictions or gun control, but it’s generally the same Republican lawmakers and governors pushing liberty versus a science and public health crowd pushing statistics about lives lost.
There have been 45 mass shootings in the US in the past month. But most gun deaths won’t be in mass shootings. More have died this year by suicide, according to data from the Gun Violence Archive. More than twice as many Americans have already died from gun violence in 2021 than servicemembers died in Afghanistan in nearly twenty years.
When Biden promised this week to get American troops out of Afghanistan after 20 years by September 11, he marked the sacrifice of 2,300 servicemembers who volunteered to serve and lost their lives there, protecting the country.
He’s mostly powerless in the gun war, however, since courts have interpreted the Second Amendment to give Americans easy access to guns and much of the country votes like it is afraid the government will take its guns away.
While there is some small movement in Congress toward new background check measures, there remains a sacrosanct belief in an inalienable right to weaponry in portions of the country, abetted by the Supreme Court’s interpretation that the Second Amendment has more to do with individuals and handguns than a well-regulated militia.
Protecting the Second Amendment at all costs is written in stone on the Republican political platform and even most Democrats are unwilling to address the root cause of gun violence, which is not that the wrong people have guns, but that there are so very many guns that are so very easy to obtain. The majority of gun deaths, after all, are suicides.

For some, the government is already overreaching

While the segments of American society trying to protect the Second Amendment may worry about the government taking their guns, Black Americans need to be seriously worried about the government taking their lives.
The country is no longer able to ignore how unarmed Black men — George Floyd to Daunte Wright and beyond — are routinely killed by police.
Social media and bodycam video along with trials like the one of former Minnesota police officer Derek Chauvin make it impossible for those men to be buried in statistics. The repeated police killing of Black men is as unacceptable as the inevitability that another mass shooting will occur.
“We need to be clear when we’re talking about, this is not a Black versus White issue. This is a right versus wrong issue,” said Angela Rose Myers, president of the Minneapolis chapter of the NAACP, during an appearance on CNN Friday. “And people in our state and our government should not be murdering their citizens.”
Related: Pressure grows on Senate to pass police reform bill
Here again, there is slow movement in Congress to pass new federal policing standards, but every day it seems like Americans wake up to a new example of police killing someone.
The spirit of those Second Amendment arguments is evident in a new interest in the First Amendment, which protects the rights of assembly and worship — rights that some Americans feel are being overrun by state orders and recommendations to practice social distancing during the pandemic.
Rep. Jim Jordan, a Republican from Ohio, went after Dr. Anthony Fauci in a heated exchange on Capitol Hill Thursday, demanding to know when Americans can have their freedoms back from the pandemic.
“What metrics, what measures, what has to happen before Americans get more freedoms back?”
The director of the National Institute of Allergy and Infectious Diseases laid out reality.
“Right now, we have about 60,000 infections a day, which is a very large risk for resurge. We’re not talking about liberties. We’re talking about a pandemic that has killed 560,000 Americans,” said Fauci, who later said his “best estimate” would be to have the number of infections per day “well below” 10,000.

A pandemic and an epidemic

It’s hard to separate these two crises. Dr. Leana Wen, the former health commissioner for Baltimore and a CNN medical analyst, was asked by CNN’s Kate Bolduan about gun violence just after speaking about Covid on Friday.
“I’m an ER doctor,” she said. “We undoubtedly understand that gun violence is a health emergency. It’s also a public health emergency.”
She said the government needs to use tools to address the crisis and compared the regulation of guns to the regulation of cars.
“We’re not trying to ban cars. We’re trying to use seat belts and drunk driving laws to make it safer. That’s the same approach that we need to use for gun violence as well,” she said.
In recent years, such as 2019, more Americans died from firearms than automobile accidents, according to data from the US Centers for Disease Control and Prevention.
Courts have sided with the people over public health in the pandemic as well as in the gun war. States are all over the map on both.
Some Americans are still under relatively strict Covid restrictions. Others are in states that have no restrictions at all.
Michigan Gov. Gretchen Whitmer, a Democrat, faced protests and an alleged kidnapping attempt in 2020 over earlier Covid restrictions. This month she wanted additional Covid vaccines to fight a hot spot in her state, in part, because she is unable to place new restrictions in her state because the state Supreme Court ruled them out of order.
Now, denied extra vaccine by the White House, she’s pushing personal responsibility instead, pushing for voluntary pauses on indoor dining, deferring to liberty.
The federal government has, arguably, barely tried to exert authority on Covid.
Former President Donald Trump disagreed with federal mandates like a requirement to wear masks in public places and pressured states to lift restrictions.
Biden has chosen to let states make their own rules, avoiding a fight over his authority and instead making masks mandatory in federal buildings and on public transportation. While public health agencies have repeatedly warned not to let up, states — led by Democrats and Republicans — have moved to loosen mandates and restrictions. The people have their freedom, and with it has come the potential for a fourth Covid surge despite a remarkable vaccination effort.

Washington has long been focused on war and the sacrifice of servicemembers who pay the price for American ideals.
A ceremony commemorated a new World War I memorial blocks from the White House Friday.
Earlier in the week, Biden visited Arlington National Cemetery after announcing he’d pull US troops from the country’s longest active military conflict.
“War in Afghanistan was never meant to be a multi-generational undertaking,” he said. “We were attacked. We went to war with clear goals. We achieved those objectives… And it’s time to end the forever war,” Biden said, announcing his decision to pull the remaining US troops from Afghanistan.
The gun war is already a much larger multi-generational undertaking if you place the start at Columbine in 1999 and consider Sandy Hook, Las Vegas and the Pulse Nightclub as major battles.
The toll of this war is horrible and there is no end in sight.
Editor’s Note: If you or a loved one have contemplated suicide, call the National Suicide Prevention Lifeline at 1-800-273-8255 or text TALK to 741741. The International Association for Suicide Prevention and Befrienders Worldwide also provide contact information for crisis centers around the world.