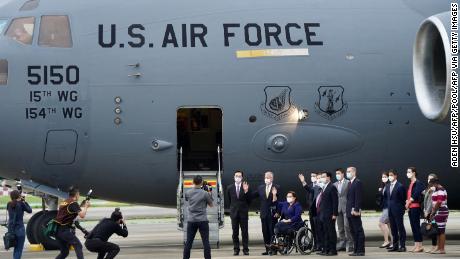 Share
Tweet
Share
Share
Email
Comments
Covid vaccines | News | Apadana Media
Taiwan is finally getting much-needed help from the United States to fight its spiraling coronavirus outbreak. But to Beijing, the offer is a major provocation that risks escalating both cross-strait and US-China relations.
A delegation of US senators visited Taiwan on Sunday morning local time to announce the donation of 750,000 doses of Covid vaccines. Taiwanese President Tsai Ing-wen called the vaccines “timely rain” for the island, which has only vaccinated 3% of its population and on Saturday recorded its highest daily Covid death toll of 37 fatalities.
“It was critical to the United States that Taiwan be included in the first group to receive vaccines because we recognize your urgent need and we value this partnership,” Sen. Tammy Duckworth said during the three-hour visit.
The donation is likely to draw the ire of Beijing, which has bridled at Taipei’s apparent refusal to accept its offer of Chinese-made coronavirus vaccines. Taipei, on the other hand, has accused Beijing of blocking its efforts to purchase vaccines internationally, rather than trying to help.
When delivering his welcoming remarks to the US visitors on Sunday, Taiwanese Foreign Minister Joseph Wu again criticized Beijing. “While we are doing our best to import vaccines, we must overcome obstacles to ensure that these lifesaving medicines are delivered free of trouble from Beijing. Taiwan is no stranger to this kind of obstruction,” he said.
But the biggest poke in the eye to Beijing is perhaps not Wu’s comments or the Covid vaccines donation deal itself, but the US military aircraft parked on the runway. 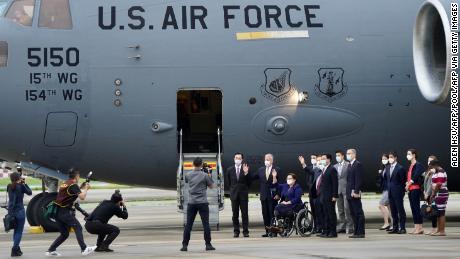 The American delegation arrived at Taiwan’s Songshan Airport on a US Air Force C-17 Globemaster III freighter — a primary strategic lift aircraft for the US military.
Previously, US officials and politicians had flown to Taiwan on the C-40, a military version of the Boeing 737 commercial airliner, according to Taiwan’s Central News Agency.
The presence of a US military transport plane capable of transporting troops and cargo — including artillery, battle tanks and helicopters — in Taiwan is likely to spark a blistering response from Beijing.
Already, the state-run nationalist tabloid Global Times has lashed out at the unusual choice of aircraft. “They want to make the landing of C-17 in the island a fact that must be accepted by the mainland, paving the way for the US and Taiwan to further escalate their collusion,” it said in an editorial Sunday.
In a separate report, the newspaper quoted Lv Xiang, an international relations expert from a government-backed think tank, as saying the visit was “the most serious provocation” from the US since Biden took office, and that the mainland “will not sit idly by.”
Previously, Chinese state media has threatened against the presence of US military aircraft in Taiwan with war. Last August, amid reports a US Navy spy plane might have taken off from Taiwan, the Global Times said Taipei and Washington were “playing with fire.”
“If the island has made arrangements of take-offs and landings of US military jets, it is crossing the Chinese mainland’s red line to safeguard national unity. This will be very serious,” it said in an editorial on August 31.
“If the mainland has conclusive evidence, it can destroy the relevant airport in the island and the US military aircraft that land there — a war in the Taiwan Straits will thus begin.”
In its Sunday editorial, however, the Global Times seems to have toned down its war talk, calling instead for prudence in Beijing’s response.
“We have the actual freedom to take actions that we believe are necessary. What we need to consider is that the effects must be positive and political benefits must outweigh the costs by far,” it said.

Photo of the Day 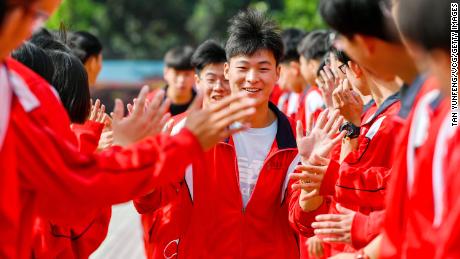 The big moment: Students in the Chinese city of Huzhou cheer before taking the national college entrance exam on Monday. Attended by millions of high school students each year, the two-day exam is considered the most important — and most stressful — test a Chinese student will take in their academic lifetime.

Microsoft says “human error” led its search engine to block images and videos of “Tank Man.”
The photos were taken down globally from Bing on Friday — the 32nd anniversary of China’s brutal crackdown on pro-democracy demonstrations in and around Beijing’s Tiananmen Square. “Tank Man” refers to an unidentified protester who defied a column of tanks advancing on the square. Images of the encounter have become iconic.
A Microsoft spokesman said they were taken offline by mistake. The images reappeared around the world — outside of China — on Saturday.
Bing, unlike its major competitors including Google, operates within mainland China. That means Microsoft is forced to censor search results for Chinese users, according to Chinese law — particularly images and information about the Tiananmen Square protests and the killings that ensued. China’s internet censorship typically ramps up in the weeks leading to the event’s anniversary.
Hundreds of people were killed on June 4, 1989, in central Beijing. The massacre made headlines around the world — as did images such as those of “Tank Man.”
Although China’s censorship typically pertains only within its borders, Microsoft’s accidental global takedown isn’t the first time Tiananmen Square information has been blocked outside mainland China by a foreign company.
The FBI in December accused a former Zoom employee of participating in a scheme to censor meetings on behalf of the Chinese government. Xinjiang “Julien” Jin and co-conspirators allegedly terminated at least four video meetings commemorating the 31st anniversary of the Tiananmen Square massacre last June. Most of the meetings were organized and attended by US participants, some of whom were dissidents who had participated in and survived the 1989 protests, the FBI said.
— By David Goldman 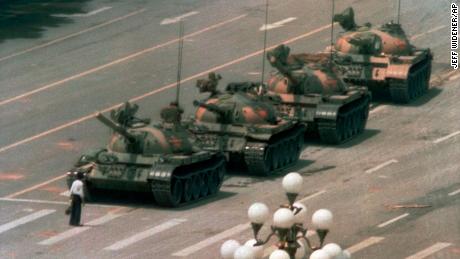 A London-based “people’s tribunal” intended to investigate whether China’s alleged rights abuses against Uyghur and other minority groups constitutes genocide is set to wrap up its first set of hearings on Monday.
The independent tribunal, which is made up of lawyers, academics and business people, has seen dozens of witnesses across four days share harrowing testimony detailing allegations of mass detentions, sterilization and sexual abuse at the hands of the Chinese government.
Though the body itself has no state backing or powers to impose sanctions on China, it has drawn a furious response from Beijing, with Foreign Ministry spokesman Wang Wenbin describing the hearings as an “anti-China farce” and an “insult on the law.”
China’s state media has also ramped up its criticism, with the nationalist Global Times tabloid publishing at least five separate articles on the tribunal, including a commentary which labeled the hearings a “puppet” of “major Western powers.”
The tribunal has long been in Beijing’s crosshairs. It was one of four British entities sanctioned by the Chinese government more than two months before a single piece of testimony had been heard. Geoffrey Nice, the chair of the tribunal and a former lead prosecutor at the trial of ex-Serbian President Slobodan Milosevic, was also sanctioned.
The tribunal was set up at the request of the World Uyghur Congress, an international organization made up of exiled Uyghurs, and is expected to deliver a judgment on whether the Chinese government has committed genocide against Uyghurs and other minority groups in Xinjiang after a second set of hearings later this year.
But in the months since the tribunal was first announced, several groups and governments have already moved to make that determination. Both the Trump and Biden administrations have labeled Beijing’s actions in Xinjiang “genocide,” while parliaments in Canada, the Netherlands and the United Kingdom have all voted in favor of non-binding motions designating Beijing’s actions as such. An independent report by more than 50 global experts in international law, genocide and the China region also came to the same conclusion.
Covid vaccines | News | Apadana Media