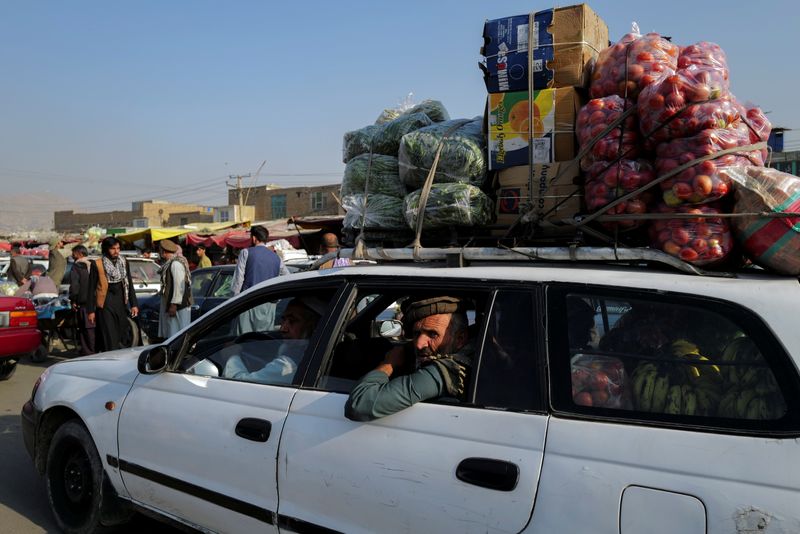 A man rides a car filled with vegetables and fruits for sale at the market in Kabul, Afghanistan October 18, 2021. REUTERS/Zohra Bensemra

ALMATY (Reuters) – Afghanistan’s economy is set to contract up to 30% this year and this is likely to further fuel a refugee crisis that will impact neighbouring countries, Turkey and Europe, the International Monetary Fund said on Tuesday.

“The resulting drop in living standards threatens to push millions into poverty and could lead to a humanitarian crisis.”

The IMF said the turmoil in Afghanistan was expected to generate important economic and security spillovers to the region and beyond and was “fueling a surge in Afghan refugees”, although it gave no estimates of potential numbers.

“A large influx of refugees could put a burden on public resources in refugee-hosting countries, fuel labor market pressures, and lead to social tensions, underscoring the need for assistance from the international community,” it said.

Assuming a million more Afghans flee their homeland and settle in other countries in a way that is proportional to the existing spread of Afghan refugees, the annual cost of hosting them would amount to $100 million in Tajikistan (1.3% of gross domestic product), about $300 million in Iran (0.03% of GDP) and more than $500 million in Pakistan (0.2% of GDP), the IMF said.

Tajikistan said last month it could not afford to take in large numbers of refugees unless it received international financial assistance. Other Central Asian nations have also said they have no plans to host refugees.

Another channel through which Afghanistan’s economic troubles could affect its neighbours is trade.

“Exports to Afghanistan are macroeconomically and socially relevant for Iran, Pakistan, Turkmenistan, and Uzbekistan,” the Fund said.

Afghanistan previously served as a source of cash dollars, through both legitimate and possibly illicit cross-border flows, due to its status as a beneficiary of large donor funds, but now even larger amounts of dollar banknotes could start flowing into the country due to its shortages, the IMF said.

The goods they are exchanged for are likely to raise new concerns over money laundering and the financing of terrorism, it added.