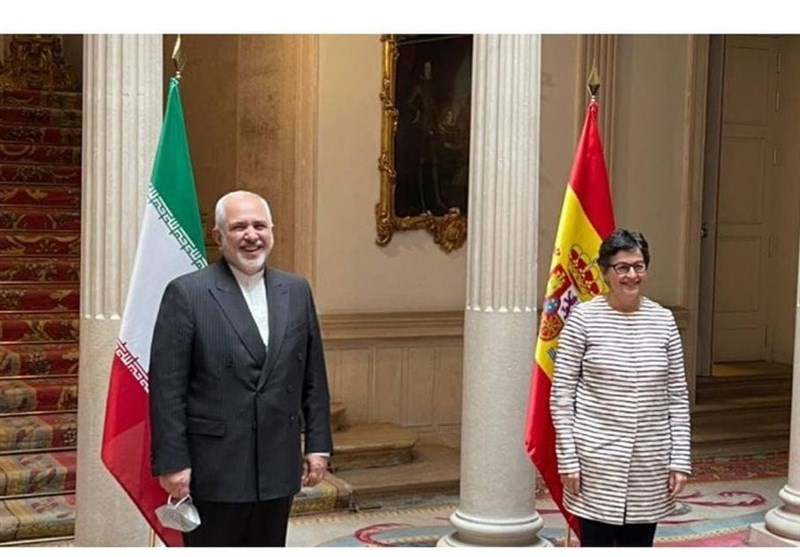 Foreign Minister of Iran Mohammad Javad Zarif called for an end to the Zionist regime’s brutal atrocities against the Palestinian people.

The top Iranian diplomat arrived in Spain on Thursday in the first leg of a European tour and held a meeting with his Spanish counterpart Arancha Gonzalez Laya.

In the meeting, the two senior diplomats discussed various regional issues as well as the political and economic relations between Tehran and Madrid.

Explicating Iran’s views about the regional issues, Foreign Minister Zarif emphasized the necessity of intra-regional interaction and also pointed to the developments in Yemen, Afghanistan and Iraq.

The top Iranian diplomat also touched on the recent developments in the occupied Palestinian territories and the tough conditions that its people are experiencing, stressing the need to end the Zionist regime’s brutal atrocities against the people of Palestine.

As the latest wave of Israeli violence against Palestinians has enter the fifth day, the death toll is on a constant rise. According to the latest figures, 109 people -including 29 children- have been killed in airstrikes in the last four days.

The Zionist regime has been pounding buildings in the Gaza Strip following heavy crackdown of worshippers in Jerusalem al-Quds.

Elsewhere in the meeting in Madrid, Zarif pointed to the bilateral ties between Iran and Spain, calling for plans to promote economic cooperation by removing the obstacles.

He further stressed the need to enhance cooperation between the small and medium-sized enterprises (SMEs) of Iran and Spain and to broaden economic relations by boosting the tourist industry.

Zarif also expounded on Iran’s stances on the Vienna talks for the revival of the Joint Comprehensive Plan of Action (JCPOA).

For her part, the Spanish foreign minister highlighted Iran’s significant place in the region and expressed her country’s views on the JCPOA, the regional issues and the bilateral ties.