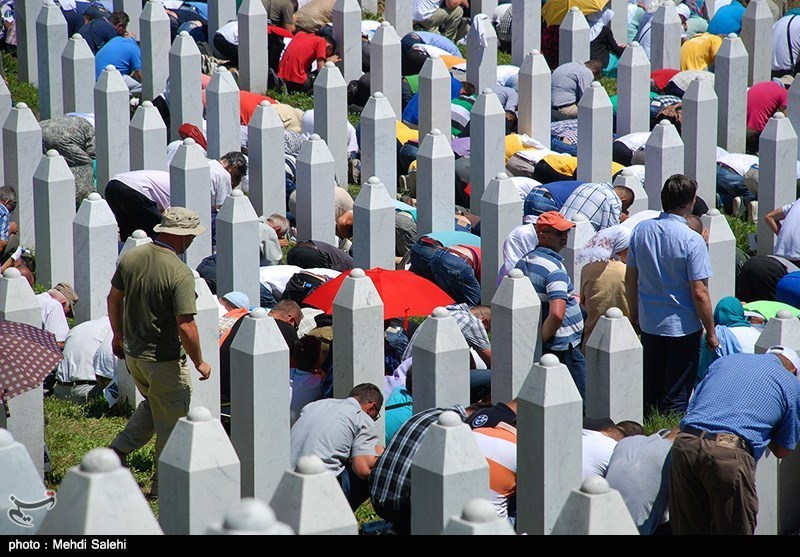 The Islamic Republic is proud to have supported the people of Bosnia and Herzegovina, Foreign Minister Mohammad Javad Zarif said in a message in commemoration of the 26th anniversary of the Srebrenica massacre.

In a letter read out at the commemoration of the anniversary of the genocide on Sunday, Zarif paid tribute to those killed in the horrific crime and condoled with the government and people of Bosnia and Herzegovina.

The events of July 1995 are one of the darkest chapters in the contemporary history of mankind, Zarif said, stressing that while the event should not be a source of hatred among different ethnicities, it should not be forgotten either.

He maintained that the Sunday event reminds the international community of the need for a commitment to justice, non-violence and a sense of responsibility in defending the oppressed, Press TV reported.

It also urges the international community, particularly those claiming to uphold human rights, to adhere to genuine human values, the Iranian diplomat stated.

Thousands of people in Bosnia and Herzegovina gathered on Sunday to mark the 1995 execution of more than 8,000 Muslim Bosniaks, also known as the Srebrenica massacre, which is Europe’s only acknowledged genocide since World War II.

They also held the reburial of 19 victims, including 16 men, two teenage boys and a woman, whose remains were found in mass graves and were recently identified through DNA analysis.

Newly identified victims are given a dignified burial each year on July 11 – the anniversary of the day the killing began in 1995.

Srebrenica’s Muslim population fled the town, which had been declared a UN “safe haven” for civilians, and rushed to the UN compound where its peacekeepers were supposed to protect them.

The Dutch peacekeepers, however, handed over the base to Serbian troops, who separated out men and boys for execution and sent the women and girls elsewhere to a territory under their control.

In less than two weeks, the Serbian forces systematically murdered more than 8,000 Bosnian men and boys and dumped their bodies in numerous mass graves in an attempt to hide their crime.