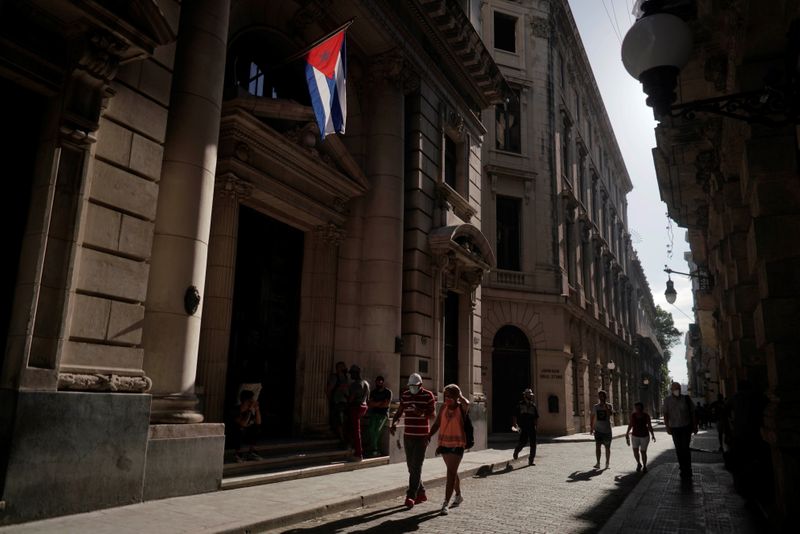 WASHINGTON (Reuters) – President Joe Biden’s review of Trump-era Cuba policy could lead to big changes in the U.S. posture toward the communist government in Havana as U.S. officials take stock of large protests in that country.

The White House says Biden’s primary goal is helping the people of Cuba as they reel from pandemic-driven economic woes. Two sources familiar with the review said on Wednesday it could lead to the easing of restrictions on payments Americans can make to their families in Cuba.

Remittances to Cuba are believed to be around $2 billion to $3 billion annually, representing its third biggest source of dollars after the services industry and tourism.

The sources also said whether to ease a travel ban between the United States and Cuba is also under consideration, as well as whether to lift the designation of Cuba as a “state sponsor of terrorism,” a label then-President Donald Trump gave to Cuba just days prior to leaving office in January.

Biden is also considering reviving the Cuban Family Reunification Parole Program, which had provided a legal way for Cuban families to be reunited in the United States, the sources said.

Trump’s withdrawal of U.S. diplomats from Cuba in 2017 in response to mysterious, possibly sonic, attacks on Americans in Havana basically froze the reunification program.

Cuban-born Homeland Security Secretary Alejandro Mayorkas on Tuesday warned Cubans and Haitians not to attempt to enter the United States illegally by sea, saying the trek was too dangerous and they would be repatriated.

The Cuba review is being coordinated by the White House National Security Council with input from the State and Defense departments as well as the Department of Homeland Security and other agencies.

The outcome of the review is not considered imminent.

White House spokeswoman Jen Psaki told reporters the Cuba policy review is being conducted “with an eye toward its impact on the political and economic well-being of the Cuban people.”

“There’s no question that the protests over the weekend and the events of the last several days are significant events, and it was the largest protest we’ve seen in Cuba in a long time. That will obviously have an impact on how we proceed,” she said.