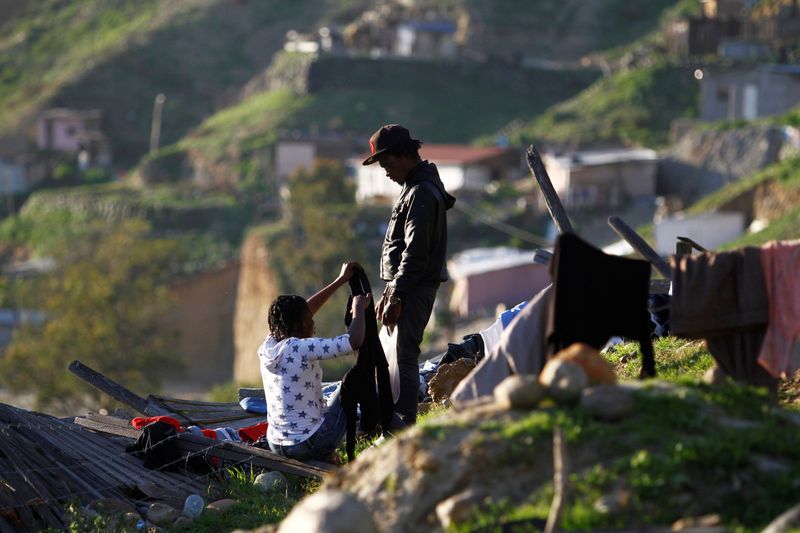 FILE PHOTO: Haitian migrants talk after washing their clothes at an Evangelical Church, being used as a shelter for stranded immigrants on their way to the U.S., in Tijuana, Mexico, February 12, 2017. Picture taken February 12, 2017. REUTERS/Jorge Duenes

TIJUANA, Mexico (Reuters) – While thousands of Haitians were detained, deported or expelled from a camp on Mexico’s frontier with Texas last week, many others traveled west to the border city of Tijuana, hoping to avoid a crackdown aimed at stemming the rising tide of migrants.

Evading detection, paying thousands of dollars, and shunning popular routes, those coming to Tijuana have drawn on the help of fellow Haitians who reached the doorstep of the United States five years ago during another spike in migration.

Contact with established Haitians in the city, including those in local business, has smoothed the pathway north, according to more than two dozen travelers who spoke to Reuters.

Since July, that network has also helped some Haitians to cross into the United States, they said.

“Thank God, we made it,” said Alexandre Guerby, a 26-year-old recently arrived in Tijuana with his wife after a month-long journey from Chile, where the couple had been living for the past four years with their Chilean-born daughter.

“I feel much safer now,” added Guerby, who acknowledged the help of other Haitians in reaching Tijuana.

Mexico last week worked with the United States to clear an impromptu camp of several thousand Haitians that sprang up between Ciudad Acuna, Mexico and Del Rio, Texas. Many had come from Chile or Brazil to reach the United States.

Guerby’s family is among hundreds who have been trickling into the city opposite San Diego this month, according to new arrivals and operators of migrant shelters.

His journey mirrors that of predecessors who first fled a major 2010 earthquake in Haiti and chronic poverty for South America. Many then moved north en masse for the United States in 2016 as the Brazilian economy deteriorated.

A number of Haitians came with children born in Chile, voicing the belief that would make it easier for them to get into the United States. Chilean citizens can enter the United States for up to 90 days with a visa waiver.

Settling in various parts of Tijuana, some Haitians work in restaurants and factories, while others have businesses ranging from cell phone shops to car washes, gardening, plumbing and interior decoration, local advertising and residents say.

Most are wary of going public about their achievements lest it cause them problems with migration authorities or attract the attention of organized crime.

Diverson Pierre, an industrial painter, said he had arrived in Tijuana in 2017 intending to go to the United States.

“But once I saw that people treated us well here, I decided to stay,” he said. “My aim was to find work, and I found it.”

Reuters spoke to more than 20 Haitians and Mexicans in Tijuana who said they were advising new Haitian arrivals where to stay, or had offered them rooms to rent themselves.

“They have extraordinary communication with each other. They all pull in the same direction,” said Jose Garcia, director of the city’s Juventud 2000 shelter. “They have phones in their hand all the time and always know how things are on the border.”

Wilner Metelus, a Haitian who heads advocacy group the Citizens Committee in Defense of Naturalized Persons and Afro-Mexicans, said previous arrivals had shown the latest influx of Haitians how to avoid official raids and make progress.

New arrival Guerby also wants to reach the United States, but plans first to work in Mexico to replenish his exhausted savings, having spent thousands of dollars getting north.

Fearful of being deported home, or sent back to southern Mexico, or even to Guatemala, Haitian migrants said they traveled in small groups to avoid detection.

Sometimes that even meant getting into private cars or taxis so they could dodge authorities by avoiding the main roads.

“Everything on the way was much more expensive because we did not have papers,” said Astride Petit, a 25-year-old Haitian.

Migrants sometimes had to pay up to 500 pesos ($25) for stretches that would usually cost 80-100 pesos, Petit noted. Still, the additional cost made for safer travel, he said.

Other Haitians were able to travel through Mexico like regular tourists, despite lacking the requisite papers. A number showed Reuters early morning bus tickets they had bought to get north from the eastern town of Poza Rica.

In contrast to the arrival of Haitians to Tijuana in 2016, many arrived with the aid of “coyotes” or guides, who took them straight to boarding houses and apartments, making them less conspicuous, the heads of five migrant shelters told Reuters.

That has also made it harder to estimate how many Haitians are in Tijuana, local officials say.

The biggest Mexican city on the U.S. border, Tijuana has long been a major thoroughfare for migrant traffic, and there is strong sympathy for the Haitian migrants in some quarters.

“In Tijuana, our experience has been they’re very hard working. They should be given a chance,” said Ruben Iturriaga, a local hairdresser who said he had many Haitian clients.

“We Mexicans are also immigrants: we go to the United States and that’s why we shouldn’t close the door on them.”

Baja California, the state where Tijuana lies, has traditionally been one of the fastest-growing in Mexico, and local labor minister Luis Algorri said the Haitians are welcome.

“We’re open to the migrants getting jobs quickly,” he said. “We have 25,000 posts to be filled on the coastal region.”