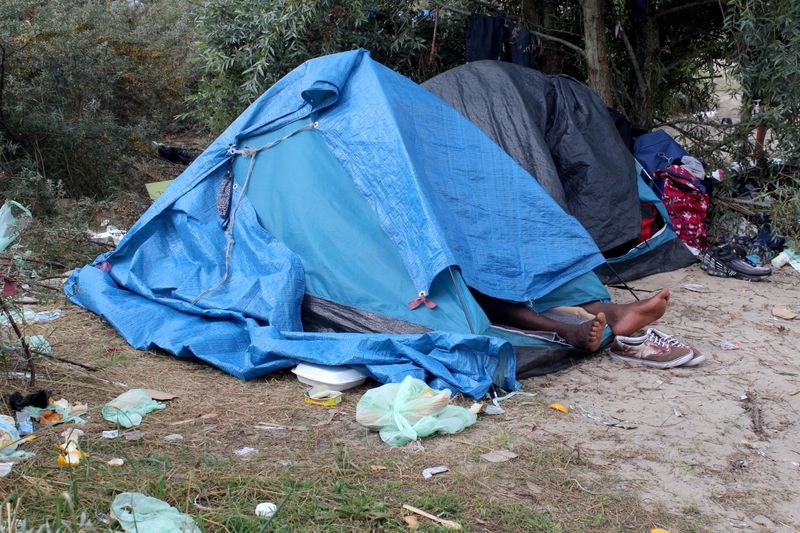 A migrant sleeps in tent at a makeshift migrant camp near the hospital in Calais, France, September 10, 2021. REUTERS/Forrest Crellin

By Richard Lough and Forrest Crellin

CALAIS, France (Reuters) – Mustafa Suleiman, 21, is resolute in his determination to reach Britain and won’t be deterred from London’s threats to intercept boats illegally carrying migrants in the Channel and send them back to France.

Suleiman, who fled Sudan’s Darfur region in 2019, has tried to make the perilous journey through some of the world’s busiest shipping lanes twice in the past year. Both times, he was thwarted by French police before making it off the beach.

“We will try and try until the last day of our life,” Suleiman told Reuters in a camp on wasteland on the edge of Calais.

While French police are preventing more crossings than in previous years, they have only partially stemmed the flow. The migrants are too numerous, the shore too long and the smugglers too good at eluding security.

Britain is irritated by the numbers making it across and accuse France of not doing enough to secure its borders.

Prime Minister Boris Johnson delivered Britain’s divorce from the European Union on a promise to ‘take back control’ of borders and this week his conservative government approved plans to turn around migrant dinghies mid-Channel.

France said it deserved better than such ‘posturing’. Charities said the plans could violate maritime laws.

Suleiman said that he would be ready to throw himself into the open seas if ever a British patrol ship stood between him and UK shores.

“(Britain) is my only solution,” he said in faltering English.

Opposite the main hospital in Calais, a stench of urine hung in the air and soiled tissue papers littered the narrow sandy paths that twisted through the scrubland. The more fortunate migrants had tents, others rested in the open on plastic sheets.

Every day, aid groups hand out meals and the local authorities rig up water taps for the hundreds of migrants who gather at the site.

Sixteen-year-old Afghan Ali Husseini only arrived in this northern port town a day earlier after a journey of several weeks from his home province of Uruzgan.

Husseini said he fled on foot and by car across the Iranian frontier as the Taliban swept across his homeland. His parents had urged him to leave, but could not afford for him to take his two younger siblings.

“I am trying to find a new country, a new life without war,” the teenager said. “Britain is my final destination. It is a good country. I can finish my education and be safe.”

Husseini had already heard tales of the dangerous crossing in overloaded inflatable dinghies.

Some British lawmakers have said the British turn-around tactics would never be used because it would put migrants at risk of drowning.

The numbers trying to reach Britain in small boats – about 13,000 so far in 2021 – are tiny compared with migrant flows into countries such as Lebanon and Turkey, which host millions of refugees. The International Organization for Migration says 40,830 migrants have landed by sea in Italy this year as of Sept. 2, and nearly 21,000 in Spain.

The issue has become a clarion call for politicians from Johnson’s party. But for many migrants, Britain’s stance hurts.

“It’s inhumane,” said a second Sudanese man who gave his name as Adam A. “They want to push us into the water.”