Six months into President Vladimir Putin’s invasion of Ukraine, the war has upended fundamental assumptions about Russia’s military and economy.

When the US warned of impending war earlier this year, officials and analysts in Washington and Europe alike assumed Russia’s much larger and better equipped military would quickly dominate Ukraine’s forces. They also believed Putin would find himself constrained by a weak domestic economy.

US Chairman of the Joint Chiefs of Staff Mark Milley even warned Congress that Kyiv could fall within 72 hours of an invasion being launched. President Joe Biden said he would turn the ruble to “rubble.” In the Kremlin, meanwhile, Putin and his closest advisers saw Ukraine as a nation divided with incompetent leaders that would lack the will to fight.

Yet those expectations have proved drastically wrong.

What this eventually will mean as Ukraine marks a half year of war and continued independence is as uncertain as the conflict’s outcome. What’s clear is that rather than reassert Moscow as a global military power as Putin hoped, his decision to invade Ukraine has launched a profound rethink of Russia’s conventional capabilities. It also prompted further expansion of the North Atlantic Treaty Organization, with hitherto neutral Finland and Sweden resolving to join the military alliance.

Russia “is not a peer military to the US” or even smaller NATO forces, said Phillips O’Brien, professor of strategic studies at the University of St. Andrews in Scotland. The war showed it “is not able to run complex operations in the way the British or French or Israelis can do, so in those terms it isn’t even a second tier military power.”

Ukraine has suffered extensive damage to infrastructure, towns and cities and heavy military casualties, while the conflict has forced millions to flee the country. Its economy is struggling.

Still, President Volodymyr Zelenskiy has emerged as a defiant wartime leader able to rally his nation to inflict huge losses on Russia’s military, which was forced to retreat from around the capital, Kyiv, and regroup in the east.

Ukraine remains supported by supplies of advanced US and European weapons, even as it is yet to show it can mount a successful large-scale counteroffensive and its allies find themselves under growing economic pressure.

Asked by the Swiss newspaper Blick this month whether she feared Russia might target NATO member Estonia next, Prime Minister Kaja Kallas said she saw no threat at her borders, despite Putin name-checking the Estonian city of Narva in a June speech where he discussed the need to recover lost Russian lands.

“The right question would be: Is it NATO’s turn next?,” Kallas told Blick. “Is Russia ready for this?”

Forecasts of Russia’s economic collapse have proved just as wide of the mark, with gross domestic product falling at a grim, but less than catastrophic rate of 4% in the second quarter, as rising energy prices underpin budget revenue. As recently as May, Russia’s own finance ministry forecast a 12% contraction this year for an economy weighed by a blizzard of international sanctions.

While the US and its close allies have imposed sanctions, many countries — from China, to India and the Middle East — have not, continuing to trade with Moscow. 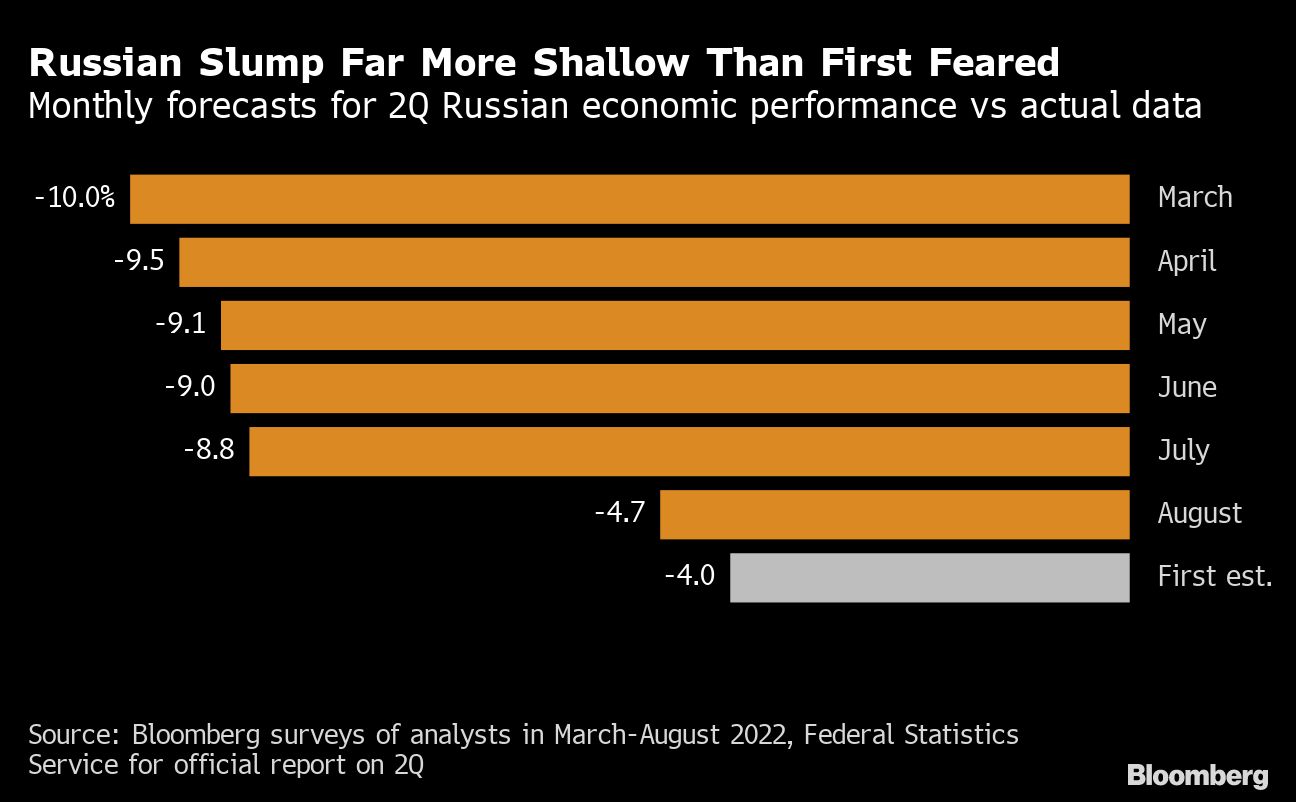 Russia has cut back on supplies of natural gas to Europe, wielding an unexpectedly potent economic weapon of its own. Though preparations have been made to mitigate the impact of further Russian supply cuts, officials from Finland to Germany in recent days warned citizens to prepare for hardship.

The next “5 to 10 winters will be difficult,” Belgian Prime Minister Alexander De Croo said on Monday, as European natural gas prices rose to about 15 times their summer average.

O’Brien was among the few Western defense analysts to predict a quagmire for Putin in Ukraine even before the war, and events since have only deepened his skepticism of the quality of Russian equipment, training and command.

Russia failed to find a response to just 20 long range HIMARS rocket systems, a 1980s US technology that Ukrainian troops are using to destroy ammunition dumps and logistics systems deep behind Russian lines, O’Brien said. “The US has 540 of them. Russia isn’t even in the same league.”

Inside and outside the government, some Russian policy makers and advisers say they were well aware of the military’s weaknesses — and the challenges it would face in Ukraine — before Putin launched his Feb. 24 “special military operation.” That’s why so many refused right to the end to believe he would pull the trigger.

One person close to the Russian defense establishment said the view was any invasion would be like the Korean War in the 1950s, with a positional front developing. Even they, however, thought Russia would be able to take more territory east of the central Dnipro river. 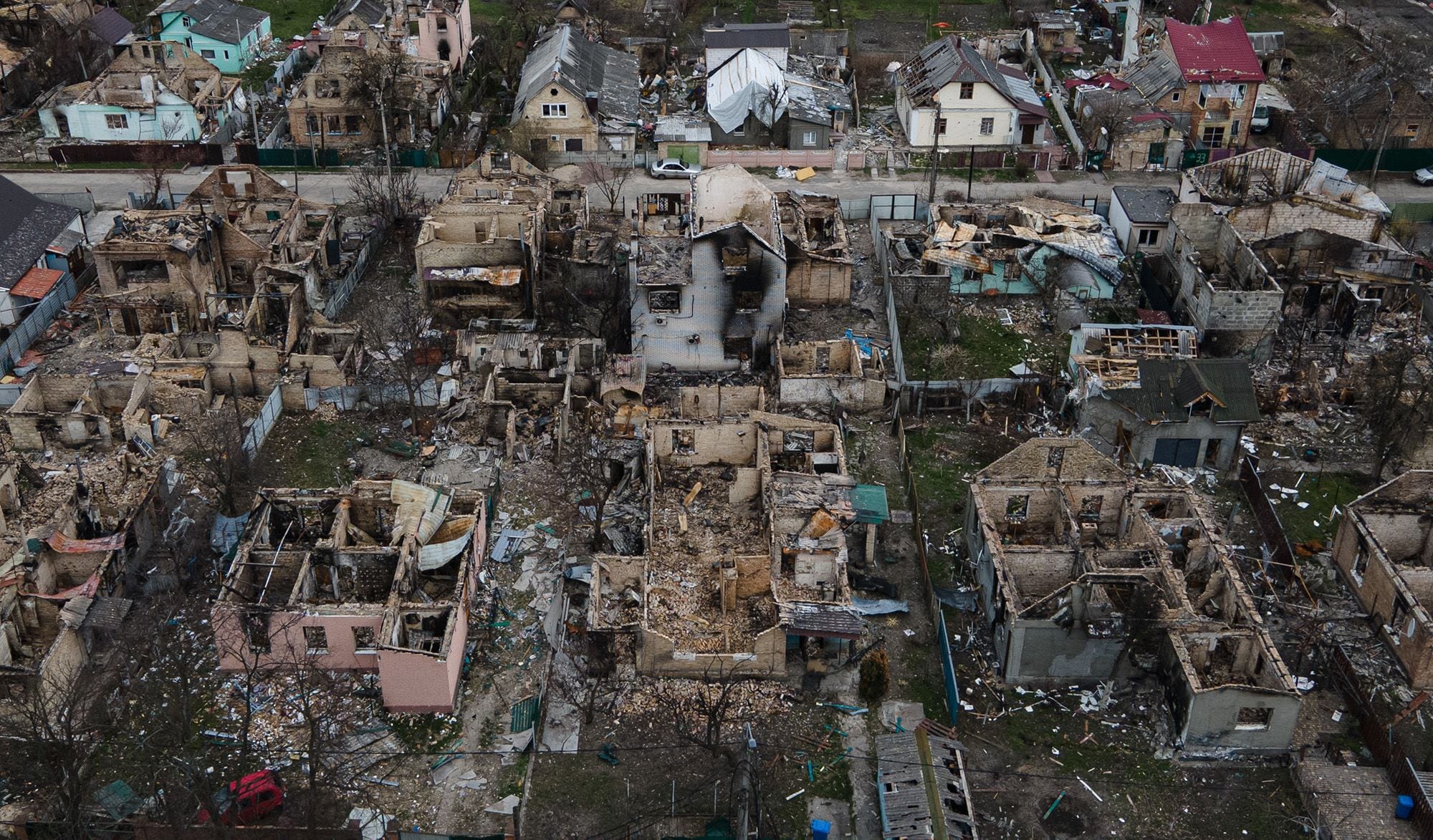 One reason for Russian under performance is that only since the war has it become clear its military was over counting to hide its underinvestment in personnel, according to Michael Kofman, director of Russia Studies at CNA, a Washington think tank.

As Russia gathered troops around Ukraine for the invasion, estimates for the scale of the force were based on a count of so-called Battalion Tactical Groups, or BTGs — maneuverable units with their own artillery, air defense, logistics and about 50 tanks and armored vehicles — assumed to include 700-900 troops each. That suggested an invasion force of about 150,000.

In reality, the average BTG had 600 personnel or fewer, and the total force may have included just 90,000 regular Russian troops, Kofman said in a recent pod cast with West Point’s Modern War Institute. With the bulk of personnel cuts coming to infantry, “they were essentially going to war and there was nobody in the vehicles.”

That had a huge impact on the war, explaining Russian difficulties in getting off roads, engaging effectively in urban warfare and taking territory, according to Kofman. Still, he remains cautious about drawing conclusions, recalling the difficulties encountered by the US against vastly inferior militaries in Afghanistan and Iraq.

Under performance of the Russian air force and air defenses has also led to questions over the quality of the equipment itself, as well as the training of Russian pilots and soldiers that operate them.

The majority of those parts were made by US companies, with the remainder coming mainly from Ukraine’s supporters. While smuggling and espionage can fill some of the void, “Russia and its armed forces remain highly vulnerable to multilateral efforts to choke off these component flows and raise the costs of its aggression in Ukraine,” said the Aug. 8 report by the Royal United Services Institute in the UK.

At the same time the motivation and ability of Ukrainian forces to innovate, out think Russian commanders in the field and deploy unfamiliar NATO standard weaponry has surprised many, with some analysts — and according to one August opinion poll, 98% of Ukrainians — now convinced they can win the war. A man takes a photo of a destroyed Russian military tank in Dmytrivka, Ukraine on April 21. Photographer: Alexey Furman/Getty Images

Russia may not even be able to sustain its nuclear arsenal over the long term, so long as it remains sanctioned, according to Pavel Luzin, a defense analyst at Riddle, a think tank devoted to Russia, and a former adviser to jailed Russian opposition leader Alexey Navalny.

For all that, Russia, remains a nuclear superpower with a fearsome capability to escalate the conflict that may yet prove decisive. The Soviet Union managed to develop its arsenal without access to Western (or modern Chinese) technology, obtaining it through espionage networks where necessary.

“The West underestimates the degree of elasticity of the Russian system — because it is poor and incompetent, but also quite explosive because it is global,” said Gleb Pavlovsky, a Kremlin political adviser during Putin’s first decade in power.