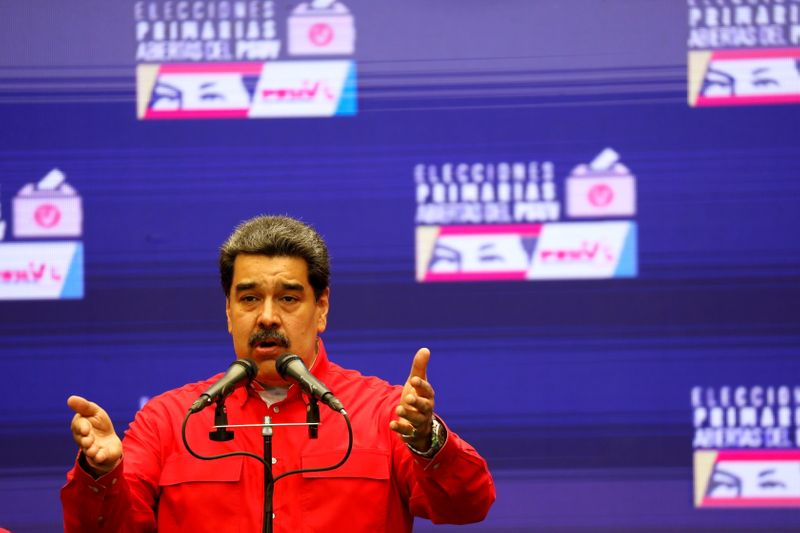 MEXICO CITY (Reuters) – Venezuelan government and opposition members will begin meetings in Mexico City on Friday to seek elusive consensus on how to overcome the economic and social crises gripping the country, members of both sides and a Mexican government source said.

The government of President Nicolas Maduro is pressing for the lifting of sanctions imposed by the United States and Europe against Venezuelan officials and institutions for what they see as criminal activities and the state’s suppression of democracy.

For its part, the opposition in the oil-producing South American country wants Maduro to release dozens of people it considers political prisoners and provide guarantees its candidates can run in regional elections due in November. It has also requested that humanitarian aid, such as COVID-19 vaccines, be allowed in.

The dialogue will be mediated by international observers such as Norway, which helped broker previous talks in 2019 that ultimately came to nothing. In 2016, the Vatican supported similar talks that also failed.

Expectations for success during the first round to take place in Mexico have been tempered by past experience.

from the presidential palace and immediately restore democracy,” Maryhen Jimenez, an academic at the Latin American Centre at the University of Oxford, wrote in Americas Quarterly.

Returning to the negotiating table is a change of tack for the opposition, which accused Maduro in the past of using dialogue to gain time and relieve international pressure.

Venezuelan government officials abandoned the 2019 talks in Barbados and Norway after the United States stepped up sanctions against the Maduro administration.

Washington has signaled willingness to ease sanctions if Maduro shows signs of serious negotiation with the opposition.

But President Joe Biden’s administration has broadly maintained measures against Venezuela’s economy and continued supporting opposition leader Juan Guaido, recognized as the country’s legitimate leader by Washington and other governments.

In January 2019, Guaido declared an interim presidency after calling Maduro’s re-election in 2018 fraudulent. But Guaido’s position has weakened since then, largely due to disappointment that he has been unable to usher in a political transition.

Maduro’s position has been shored up by support from Russia and China, and the sources close to the talks said Russian delegates would be present at the Mexico City talks.

The opposition delegation will include former mayor and lawyer Gerardo Blyde; the ambassador to Colombia appointed by the 2015 parliament, Tomas Guanipa; the ambassador of the Guaido government in the United States, Carlos Vecchio; and former legislator Stalin Gonzalez.

The Maduro administration’s negotiating group will be led by Jorge Rodriguez, president of the National Assembly elected in December, and Hector Rodriguez, governor of the state of Miranda and a close confidant of the president.

The Venezuelan crisis has generated a massive exodus that the Organization of American States recently estimated would reach 7 million people by 2022, the largest in the world, exceeding the likes of Syria.