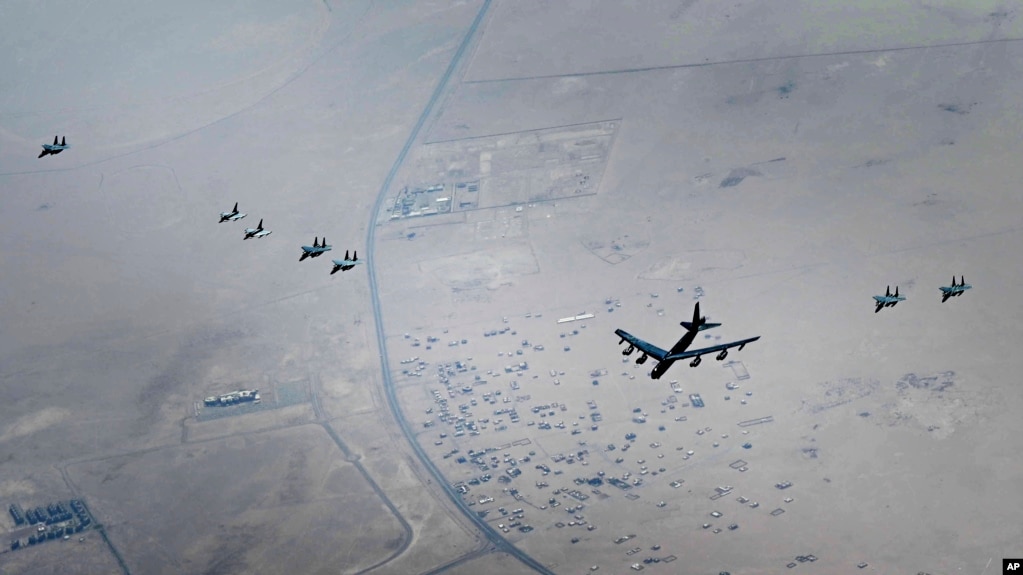 The United States military said Monday it flew a pair of nuclear-capable B-52 long-distance bombers over the Middle East in a show of force, the latest such mission in the region as tensions remain high between Washington and Tehran.

The bombers took off from the Royal Air Force base at Fairford, England, and flew over the eastern Mediterranean, the Arabian Peninsula and the Red Sea Sunday in training missions together with Kuwaiti and Saudi warplanes, before departing the region.

“Threats to the U.S. and our partners will not go unanswered,” Lt. Gen. Alexus Grynkewich, the top U.S. Air Force officer in the Middle East said in a statement. “Missions like this … showcase our ability to combine forces to deter and, if necessary, defeat our adversaries.”

Although the U.S. military’s Central Command did not mention Iran, Washington has frequently dispatched B-52 bombers to the region as hostilities simmered between the U.S. and Iran. The last such flyover was in June.

Iran’s regional foe, Israel, also joined in the multinational mission. Though unacknowledged by the U.S., three Israeli F-16 fighter jets accompanied the American bombers “through Israel’s skies on their way to the (Persian) Gulf,” the Israeli military said, describing the country’s cooperation with the U.S. military as key to “maintaining aerial security in Israel and the Middle East.”

Central Command was expanded last year to include Israel, a move seen to encourage regional cooperation against Iran under former President Donald Trump.

Trump’s decision four years ago to withdraw the U.S. from Tehran’s landmark nuclear deal with world powers sparked a series of escalating incidents in the region.

Even as diplomats now wrangle over a possible revival of the nuclear accord, Iran’s navy seized two American sea drones in the Red Sea last week.

That capture came just days after the country’s paramilitary Revolutionary Guard towed another sea drone before releasing it as an American warship trailed it. The U.S. Navy has been deploying ultra-endurance aerial surveillance drones to monitor threats in the crucial waterways, which have witnessed repeated maritime attacks.

U.S. and Iranian negotiators in Vienna have been attempting to revive the 2015 nuclear deal, which imposed sharp limits on Iran’s atomic program in exchange for international sanctions relief. Last week, the State Department described Iran’s latest negotiating position as “not constructive.”

Meanwhile, Iran now enriches uranium up to 60% purity — a level it never reached before that is a short, technical step away from 90%. While Iran long has maintained its program is peaceful, nonproliferation experts warn Tehran has enough 60%-enriched uranium to reprocess into fuel for at least one nuclear bomb.