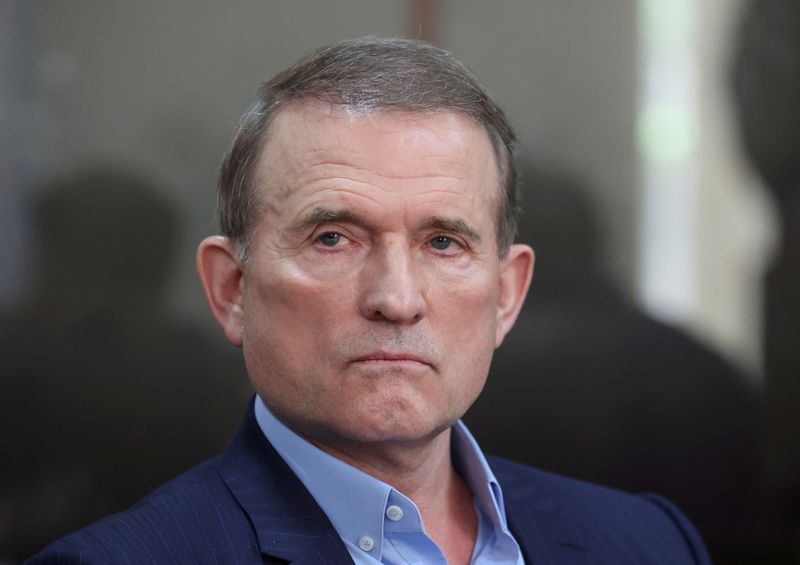 By Natalia Zinets and Pavel Polityuk

KYIV (Reuters) – A Ukrainian court on Tuesday ordered pro-Russian politician Viktor Medvedchuk to remain under house arrest until December after prosecutors widened their investigation into his activities and accused him of financing separatist fighters.

Medvedchuk, who strongly denies wrongdoing, has been under house arrest since May, facing accusations of treason and attempting to plunder state resources in Crimea, a part of Ukraine which Russia annexed in 2014.

Prosecutors had asked a Kyiv court for Medvedchuk to be taken into custody instead of house arrest, saying he posed a flight risk or might try to put pressure on witnesses.

The court turned down their request and extended Medvedchuk’s house arrest to Dec. 7 from Oct. 31.

The court decided “to apply a measure of restraint in the form of house arrest, forbidding him to leave his place of residence round the clock”, judge Vita Bortnytska said at a televised court hearing.

Last week law enforcement officials said they had widened their investigation into Medvedchuk and that they suspected him of colluding with top officials to buy coal from mines in separatist-held areas of eastern Ukraine.

Medvedchuk, the Kremlin’s most prominent ally in Ukraine, said the charges were trumped up to silence his criticism of government policy.

“The criminal case and the charges against me are completely groundless and unfounded,” he said before the verdict. “I regard it as an illegal criminal prosecution and political repression.”

Ukraine has been at war with Russian-backed separatists in the eastern Donbass region since 2014. It faced an acute fuel shortage after separatists seized territory where coal mines were located.

Medvedchuk, whose political party is the second largest in parliament, is a Ukrainian citizen but has close ties with Russian President Vladimir Putin and has said the Russian leader is godfather to his daughter.