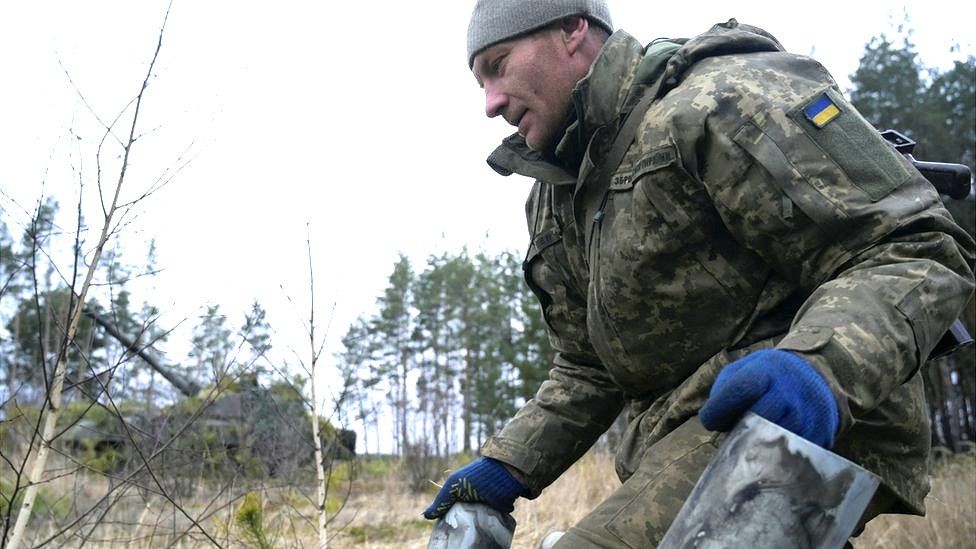 Ukrainian troops are counter-attacking Russian forces in some areas, with reports that they have gained ground near the capital, Kyiv.

Local authorities in the town of Makariv, west of Kyiv, said Ukrainian flags were flying there once more.

A UK defence analyst told the BBC the fightback could force Moscow to change its tactics.

And a US defence spokesman said Ukrainians were reversing battlefield momentum in some parts of the south.

Volunteers and Ukrainian troops in the small southern town of Voznesensk destroyed an armoured convoy and pushed back Russian forces.

And in Kherson, close to the Crimean peninsula and the first city to fall to Russia, Ukrainian forces are also trying to recapture territory.

However the latest assessment from the UK Ministry of Defence says Russian troops in Ukraine are moving in from the north and south to “envelop Ukrainian forces in the east of the country”.

Russian forces are also continuing to bombard the southern port city of Mariupol, although the port area itself is said to have suffered relatively little damage.

Justin Bronk, from the UK defence and security think tank the Royal United Services Institute (Rusi), said the Ukrainian pushback came as the Russians were trying to compensate for their lack of progress so far.

“The Russians have quite visibly failed to take the whole of Ukraine across multiple positions of advance,” he told the BBC.

“So now they are trying to pull their resources back and consolidate them and concentrate them on one push at a time – in particular around Mariupol and the south.”

He said that if the Russians took Mariupol, which has been besieged for weeks and is low on supplies, then they might look to redistribute troops and ammunition, first to Ukraine’s eastern Donbas region and then perhaps to the north-eastern city of Kharkiv.

But as Ukraine pushes Russian troops back around Irpin, about 20km (12 miles) from Kyiv, and other suburbs along with Makariv, it could hamper Moscow’s plans to capture the capital, he added.

“Essentially, what [Ukrainian forces] are trying to do is cut off an entire side of the attempted encirclement of Kyiv, which would force the Russians to either try to break north and abandon those positions, or for Russia to reroute significant combat power to try to break through and release their own forces there.”

The Pentagon gave more details of the Ukrainian counter-offensive on Tuesday, saying it has seen increasing signs in recent days that Russians are being dislodged from areas they previously held.

Spokesman John Kirby told CNN that he was unable to confirm reports from Ukrainian officials that they had retaken at least one town and expected to take more in coming days.

However, he said it would be “consistent with the kind of fighting and the kinds of capabilities we have seen the Ukrainians use”.

He said Russian forces had “stalled” and were running out of fuel and food.

There were also communication problems between air and ground forces, with some Russian fighters resorting to mobile phones to speak to each other, Mr Kirby said.

“They are slowed,” he said, adding that this was partly due to “their own ineptitude”.

Another Pentagon official, speaking anonymously, told the AFP news agency that some Russian soldiers had been laid low with frostbite, because they did not have the appropriate cold weather clothing for the terrain.

The official said that because of losses and other problems, Russian forces inside Ukraine were now below 90% of their available combat power.