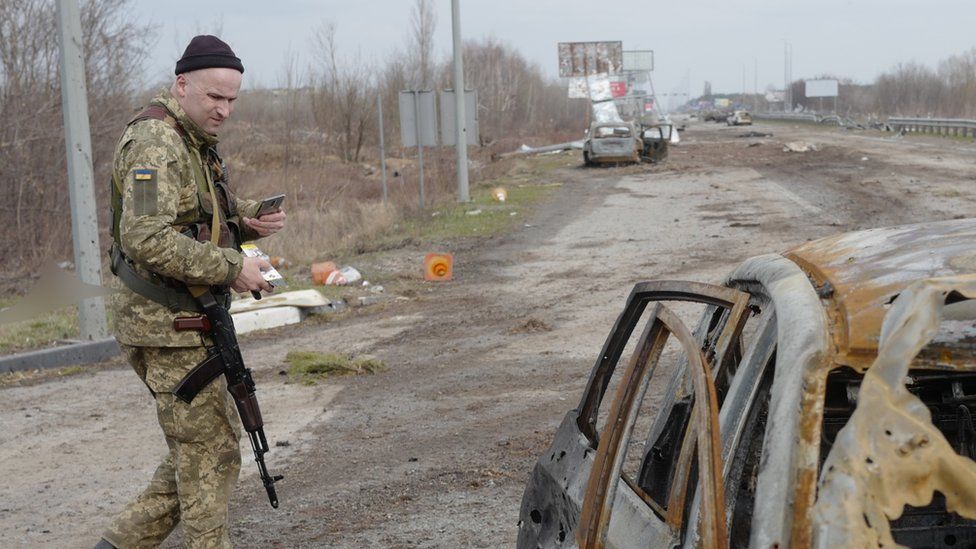 Footage of Russian troops shooting a man with his hands up on a highway outside Kyiv at the beginning of March was shared around the world. Now the Russians have been pushed out of the area and the BBC’s Jeremy Bowen has been to see the grim aftermath of their short-lived occupation.

This report contains material some viewers will find disturbing

We counted 13 bodies on a nightmarish stretch of road not much more than 200 yards long, between Mria and Myla, villages whose Ukrainian names translate as Dream and Sweetheart.

Two of the dead are confirmed as Ukrainian civilians who were killed by the Russians. The others have not been identified yet – they lie where they were killed – but only two are wearing recognisable Ukrainian military uniforms.

Our BBC team was able to get to the area, on the main E-40 highway as it approaches Kyiv, because Ukrainian forces had captured the sector only 10 hours earlier.

The marks of battle and of heavy shelling were everywhere. Petrol stations and a hotel that was well-known for its spa and restaurant were in ruins. Shell holes and craters pockmarked both carriageways.

Ukrainian troops changing a wheel in the ruins of a roadside garage said the Russians were about 4km (2.5 miles) away and had pulled their remaining men and armour back after a hard fight, lasting several days, in the early hours of the morning.

Left behind in the heart of the desolation were the dead bodies, and a mass of questions and concerns about who they were and how they died.

Some answers already exist for a couple who were killed by the Russians and left to decompose on 7 March. Their rusty, shrapnel riddled car lies in the road next to one of the petrol stations, reduced to a shell by fire. Next to it are the burnt and twisted remains of a body that is just about recognisable as the remains of a man. A wedding ring is still on the corpse’s finger. Stretched out inside the hulk of their car is what is left of the incinerated body of a woman, the mouth opened in what looks like a scream.

Their deaths were filmed by a Ukrainian drone on 7 March, operated by the Bugatti unit of Territorial Defence. The unit released the video, which was republished by news organisations around the world. It caused outrage because it showed the cold-blooded killing of a man who had raised his arms to show he was harmless, in the classic gesture of surrender.

The bodies, the BBC discovered in an investigation this month, are of Maksim Iowenko and his wife Ksjena. They were part of a convoy of 10 civilian vehicles who were trying to escape the Russians and get to Kyiv.

As they drove down the road, they spotted a Russian tank in position, dug into the grass verge. The drone video shows it was clearly marked with the letter V, one of the identifiers used by the Russian armed forces. The other cars did quick U-turns and drove away at speed. But Maksim’s car stopped, most likely because it was hit.

As soon as the car stopped, Maksim leapt out and raised his hands. Within seconds he was shot dead. His wife was killed in the car. Also in the car were their six-year-old son and the elderly mother of one of Maksim’s friends. Both of them survived and were eventually released by the Russian soldiers.

They were found walking back down the road, and the woman told her family that Maksim was shouting that a child was in the car when he was killed. Both survivors, according to the Bugatti drone unit, are now safe but deeply traumatised.

The car is now burnt out, but it was not on fire after the attack. One hypothesis must be that the bodies and the car were set on fire by the Russians to destroy the evidence of what they had done. The Bugatti Unit has submitted its drone video to the Ukrainian authorities and to the Metropolitan Police in London.

More burnt cars and dead bodies line the road for the next few hundred yards. No video has emerged to show what happened. A credible working assumption for any investigation must be that the other dead people were killed by the tank crew, or other Russian soldiers.

Attempts have been made to destroy the other bodies. Some have been left to rot where they were killed. But other corpses have been piled up and surrounded by tyres. Charred clothing indicates attempts were made to set fires around them. Tyres are flammable and must have been placed there as an accelerant.

The emplacement where the tank was dug in has a clear arc of fire across the area where the 13 bodies are lying. The tank has gone but debris was left by its crew, including Russian army field rations. In the woods nearby is at least one other tank, which has been burnt out after being hit by anti-tank missile.

A Ukrainian soldier produced a wallet he had found in the tank. He emptied out Russian identity papers, bank notes in the Russian currency, the rouble, and small change in Belorussian coppers. The major thrust to the north-west of Kyiv came from invaders who had crossed the border from Belarus, Moscow’s ally.

Close by the knocked out tank are the remains of a chaotic camp, with dugouts, chairs and a long table piled high with the remains of food and drink. They are all surrounded by big piles of garbage, rotten food and empty bottles of alcohol. Ukrainian soldiers said shops at the petrol stations were looted.

Next to the table is a large pair of bolt-cutters. Piles of unburied rubbish scattered in a forward position are usually a sign of undisciplined soldiers.

We decided to drive two or three kilometres further down the road, after Ukrainian soldiers said more Russian armour had been destroyed.

In a small village, a Russian tank and two armoured personnel carriers were broken and burnt. Some of the wreckage was still smoking. The force of weapon that destroyed the tank blew off its turret and main gun, which lay upside down and half buried in a crater around 15 yards away.

In the pine woods on either side of the road Ukrainian soldiers were digging trenches and fox holes with shovels. Others were patrolling. It was far too early to say whether the Russians were gone for good, or whether they would be back.

What is clear though is that Russian forces, under continued pressure from Ukrainian soldiers, have been forced to yield strategic territory around Kyiv. Every time they move back, the Ukrainian capital and its people become a little safer.

As and when the Russians leave, more evidence is likely to emerge of civilians having been killed – backing up the many stories that have emerged of such incidents.

The gruesome scenes on the road were more than simply the terrible deaths of human beings who had become victims of President Putin’s decision to invade. It is also a crime scene, with evidence that should be collected and preserved for an investigation whenever this war ends.

Under the laws of war civilians are protected, and when they are killed in defiance of those laws, their deaths amount to war crimes.