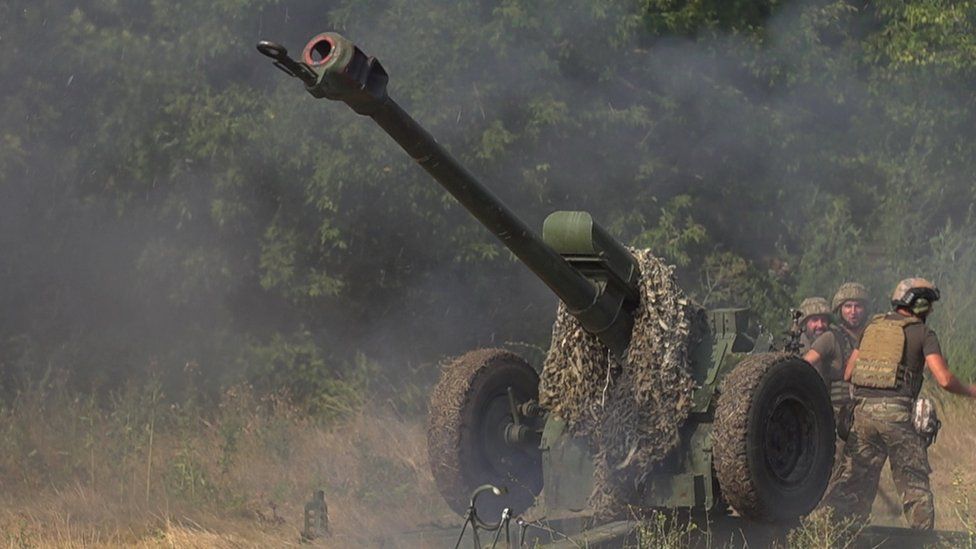 For weeks Ukraine’s armed forces have been talking of launching a counter-offensive in the south, and now a senior military officer has told the BBC they aim to recapture the city of Kherson within weeks. Instead of a major full-scale attack, they are expected to adopt a different strategy, with a role for small drone units.

His eyes glued to a monitor, a member of Ukraine’s special operation forces is operating a drone flying over Russian positions when he spots an armoured vehicle hidden in trenches: “Fire when you’re ready,” he says in a voice message to an artillery unit.

Russian lines are just 3km (1.9 miles) away and this soldier has to hide his identity: his call-sign is Maverick, from the movie Top Gun.

The task for Maverick and his team is to identify potential targets and pass on their coordinates. Then they watch and direct fire.

Big guns make a big difference in this conflict.

“This is a war of artillery, high-tech weapons and minds. The soldier still plays an important role but success is mostly dependent on rockets, artillery and air strikes,” says Maj Gen Dmytro Marchenko, who successfully organised the defence of the southern city of Mykolaiv from Russian attack last spring. It is not like World War Two, when one big army attacked another, he argues

And that is what Russia’s offensive has relied on in Ukraine’s eastern and southern territories. Relentless barrages of Russian artillery pummel everything in their way, destroying military positions and residential areas too.

According to Ukrainian authorities, the Russians are sending an extra 30 battalion tactical groups – some 22,000 troops – to the south to respond to Kyiv’s much-vaunted counter-offensive.

The arrival of American Himars and M270 multiple rocket launchers has given the Ukrainians the ability to destroy targets they couldn’t reach before.

But they say more are needed to counter Russian fire and to hit priority targets such as air defence, ammunition depots and supply routes.

Maj Gen Marchenko believes they will take Kherson back “in the near future” – and in a matter of weeks.

But in order to succeed they need to breach what he calls Russia’s static defence strategy: “We have to have three times more power, quantity of weapons and artillery. Unfortunately, we don’t have such an advantage. Therefore, we have to act in a non-standard way, drawing them out of their positions to equalise our power and resources.”

One of their non-standard tactics clearly involves artillery working in tandem with aerial reconnaissance groups. That could help to split Russian forces into smaller groups and encircle them without taking heavy losses, which would be unavoidable in an open confrontation.

“We have crossed the River Inhulets,” explains Maverick, “and now we’re trying to expand that ground, bring more equipment and cut off the Russian forces here into two groups – Kakhovka and Kherson.”

A key part of their strategy is to sever Russian supply routes in the south.

Bridges over the River Dnieper have been hit repeatedly at Kherson and Nova Kakhovka, and recent explosions at an airbase and ammunition depot in Crimea appear to be part of the same plan, even if Ukraine has not officially acknowledged its hand in those attacks.

But identifying such targets and guiding artillery strikes is a dangerous job. Maverick and his colleagues are closely monitoring an attack on a Russian vehicle that they believe can jam Ukrainian communication signals.

After a dozen rounds, the closest they can get to the target is 15m (50ft) before Russian forces respond. The terrifying whistle of a Russian shell sends everyone rushing inside a hangar to take cover. Missiles rain down around us. Mounds of earth rise like a fountain as shells hit the ground.

By now the Russians will know a drone team is directing artillery fire and they have started bombarding the area at random.

The drones are still out there and Maverick and his teammate are desperately trying to get them back.

With satellite navigation down and the remote control signal lost, drones become uncontrollable.

The soldiers survive the onslaught unscathed, but they have lost one of their drones.