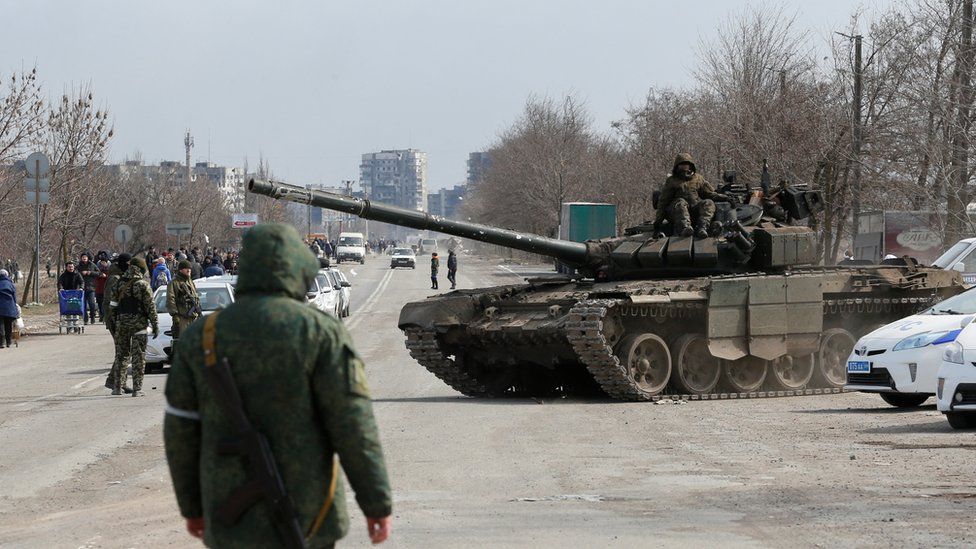 A Ukrainian MP has accused Russia of trying to starve the besieged port city of Mariupol into surrendering.

Dmytro Gurin was speaking soon after Ukraine rejected a Russian deadline demanding Mariupol’s defenders lay down their arms in exchange for safe passage out of the city.

Mariupol is a key strategic target for the Russian military.

Around 300,000 people are believed to be trapped there with supplies running out and aid blocked from entering.

Residents have endured weeks of Russian bombardment with no power or running water.

Mr Gurin said there was no question of Mariupol surrendering.

Under the proposal, which Ukraine had until 05:00 Moscow time (02:00 GMT) to accept, Russian troops would have opened safe corridors out of Mariupol from 10:00 Moscow time (07:00 GMT), initially for Ukrainian troops and “foreign mercenaries” to disarm and leave the city.

After two hours, Russian forces say they would then have allowed humanitarian convoys with food, medicine and other supplies to enter the city safely, once the de-mining of the roads was complete.

But the deadline came and went.

Should Russia capture Mariupol, it would help it create a land corridor between the eastern regions of Donetsk and Luhansk, controlled by Russian-backed separatists and Crimea, which was annexed by Russia in 2014. So far though, Mariupol’s defenders have stood firm.

There are mounting concerns about the humanitarian situation, with Yaroslav Zhelezniak, a Ukrainian MP from Mariupol, calling it “hell on Earth”.

Residents spend most of their time in shelters and basements as Russia continues its unrelenting attack on the city, from land, air and sea, officials say.

Pictures show a city in ruins, with entire neighbourhoods devastated. The mayor, Vadym Boychenko, estimated that over 80% of residential buildings had either been damaged or destroyed, a third of them beyond repair.

Bodies are being left in the streets as it is too dangerous to get them.

Mr Gurin said teams were still unable to clean the rubble of a theatre which Ukrainian officials say was bombed by Russia last Wednesday. Hundreds of people are believed to remain trapped in the basement, which withstood the attack. Moscow denies targeting the building.

“The services cannot clean this rubble because the shelling never stops and bombing never stops. It’s really dangerous,” he said. He could not give an estimate on how many people had managed to flee the area as “we don’t have connection with Mariupol”.

Since the war began, authorities say at least 2,500 people have been killed in Mariupol although the true figure may be higher.

Previous efforts to evacuate Mariupol’s civilians have been blocked by Russian fire, although local authorities say that thousands have been able to leave in private vehicles.

On Sunday, the Ukrainian deputy prime minister said 3,985 people had fled from Mariupol to Zaporizhzhia, adding that on Monday the government plans on sending about 50 buses to pick up further evacuees from the city.

President Volodomyr Zelensky has said the Russian siege amounts to a “war crime”.

“This is a totally deliberate tactic,” he said. “They [Russian forces] have a clear order to do absolutely everything to make the humanitarian catastrophe in Ukrainian cities an ‘argument’ for Ukrainians to cooperate with the occupiers”.