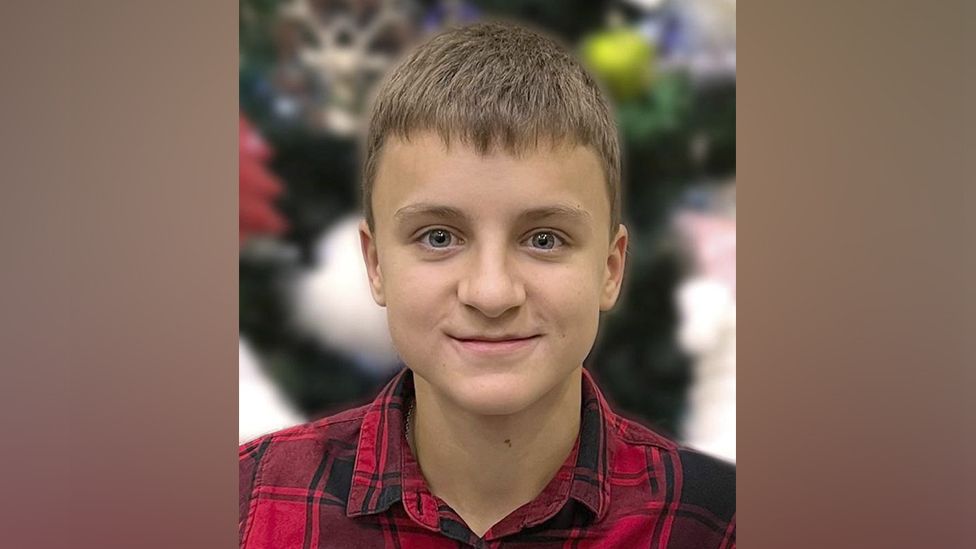 Evhen Ryabukon patted the coffin gently, and appeared to be having a final conversation with his son. He broke down, over and over again, before he could finish.

His wife Inna, steeling herself, adjusted the framed photo of a smiling, young boy placed on the coffin – a mother’s last act of care.

The boy was Elisei Ryabukon. He would have been 14 in May.

Just over a month after he was killed in firing by Russian soldiers, his family, friends, neighbours and classmates gathered at a church in the city of Brovary in the east of Kyiv, to say goodbye to this much loved child from Peremoha village. A community that had been scattered by war, came together in grief.

Elisei was remembered as honest, humble and helpful, a boy who didn’t like to fight and who refused to play aggressive sport.

Inna, Elisei and her younger son were stuck in Peremoha when the fighting started.

“On 11 March, the Russians gave us permission to leave. They even waved us goodbye and wished us luck. Then when we were crossing a field, they started firing at us from every direction,” Inna said.

There were five cars in the convoy of vehicles evacuating. Elisei was in the second car, in which no one survived.

“I crawled through the field and saved my three-year-old son by dragging him by the hood of his jacket. The fact that any of us made it out alive was pure luck,” she said.

She says her younger child is the only reason she’s able to carry on. She’s filed a complaint with the police and wants justice for Elisei’s killing.

“I want the world to know about the crimes of Russia. I want every victim to be counted. I want Russia to be held accountable for the people, children and women, they have killed on our land,” she said.

Elisei is among more than two hundred children known to have been killed in Ukraine so far, according to the country’s government. Hundreds more have been injured.

Ohmatdyt hospital has received dozens of children wounded in the fighting.

Six-year-old Daniil Avdeenko has been brought here from the northern city of Chernihiv, which had been surrounded and bombarded by Russian forces until they withdrew from the area at the start of April.

Daniil and his parents were injured in mortar shelling just outside their home in a residential neighbourhood.

When the explosion occurred, all of them were thrown to the ground. His father Oleksandr saw that his wife’s leg was bleeding profusely. He used the strap of her bag as a tourniquet, an act that has saved her leg from being amputated.

Oleksandr had called out to Daniil, who’d told him he was alright. But when the boy began to stand up Oleksandr realised how badly he was hurt.

“I saw that he had shrapnel all over his body, and he was bleeding a lot,” he said.

All three were taken to different hospitals.

“For the first four days we didn’t know who was alive, and who wasn’t. They didn’t register my son’s name when he was admitted to hospital,” he said.

Eventually the family was reunited, and brought to Kyiv for treatment.

Daniil had shrapnel pieces in his head which were removed, but the bits lodged in his back are still there. Doctors say it will be too painful to remove them right now. The boy has multiple injuries and fractures in his leg. It’s not clear when he’ll be able to walk.

For most part he’s cheerful, but he lets out little cries of pain when a nurse comes to inject a medicine.

“He tells the nurses at the hospital the details of how we were all covered in blood. He remembers it all. But he blames himself. Just before it happened, I’d told him to go down to the basement with his mother. But he insisted on coming outside to me,” says Oleksandr. “I’ve explained to him that he’s not guilty. We all have.”

After the war started, Oleksandr says Daniil would ask lots of questions.

“When there was shooting, he would ask ‘Dad who’s shooting now?’. I’d say ‘ours’. ‘And now?’, he’d ask. I’d tell him ‘It’s our men being attacked,’ In the night, he would see tanks in his dreams. When bombs dropped from the sky, he would wake up frightened. But despite it all he would still have fun. After the attack though, he’s changed drastically,” says Oleksandr.

Even those who’ve managed to flee physically unscathed, bear scars of psychological trauma.

13-year-old Ilya Bobkov escaped along with his family from Bucha just outside Kyiv, which was under Russian control for weeks.

They managed to leave through a humanitarian corridor which was opened in March for civilians to be evacuated. His family now lives in one room in a rundown government building in Kyiv.

“On 24 February when the fighting started, I was shocked. I had expected it to be a regular day, I’d go to school, do my homework and play games. My mother came to my room and told me to pack a few things. Then we started living in our basement. It was very scary. It was hard to get through the nights,” Ilya says.

On their way to safety, Ilya and his family saw burning buildings, destroyed tanks and corpses along the way.

“I can’t escape the feeling that the war is still all around us. I dream about my family being killed or taken hostage by the Russians. I wake up in cold sweat,” Ilya says.

His aunt Valentyna Solokova whose family evacuated along with Ilya’s says they tried to keep the children distracted by playing games or looking at family photographs. They were also forced to have difficult conversations, especially when they were running low on food supplies.

“I’d tell the children that bread and water are the most important things. I had to make them understand that they lived one life before, where they had everything, they went to school and played games. And now they had to learn to live without all that,’ she said. ‘I told them the time has come for you to grow up.”

A generation of children in Ukraine is cut off from a normal childhood at the moment. The UN estimates that around two thirds of the country’s 7.8 million children have been displaced.

With fighting raging in the south and east, and renewed shelling in Lviv and Kyiv, no part of Ukraine appears safe right now.

It’s unclear when the children of this country might be able to return to the life that was suddenly interrupted.