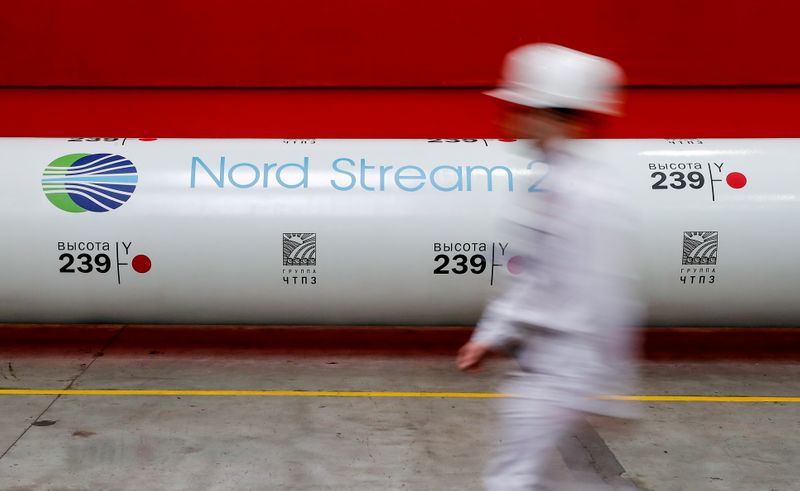 FILE PHOTO: The logo of the Nord Stream 2 gas pipeline project is seen on a pipe at the Chelyabinsk pipe rolling plant in Chelyabinsk, Russia, February 26, 2020. REUTERS/Maxim Shemetov

WASHINGTON (Reuters) -The Biden administration on Friday slapped sanctions on one Russian vessel and two Russian individuals involved in the Nord Stream 2 gas pipeline, but opponents of nearly-completed project said the move would do little to stop it.

U.S. Secretary of State Antony Blinken said in a statement that the administration has now sanctioned a total of seven persons and identified 16 of their vessels as blocked property under sanctions law passed by Congress.

But opponents of the $11 billion project to bring Russian gas to Germany under the Baltic Sea said the new sanctions were not strong enough.

“These sanctions do nothing to halt Nord Stream 2,” said Daniel Vajdich, president of Yorktown Solutions, which advises the Ukrainian energy industry on the matter.

Biden has opposed the pipeline, like the previous two U.S. presidents, because it bypasses Ukraine, likely depriving it of lucrative gas transit fees and potentially undermining its struggle against Russian aggression.

But in May the U.S. State Department waived two sanctions on Nord Stream 2 AG, the company behind the project, and its chief executive, Matthias Warning, a Putin ally.

Biden has sought to repair U.S. relations with Germany, Europe’s biggest economy, as he needs the ally’s help on everything from the economy to relations with China and Iran.

“The only thing that can stop NS2 from becoming operational is lifting the waivers and sanctioning … Nord Stream AG, which they refuse to do,” Vajdich said.

ClearView Energy Partners, a Washington-based nonpartisan research group, estimated it could be completed by September 3.