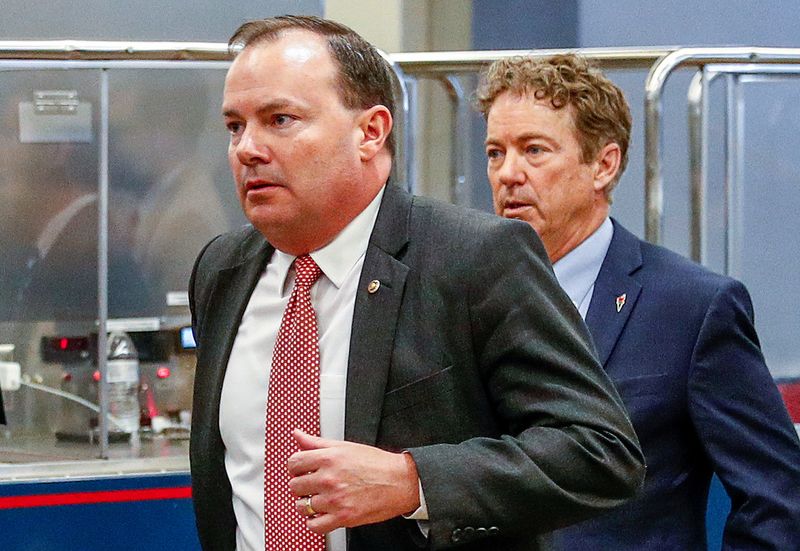 FILE PHOTO: U.S. Senators’ Mike Lee (R-UT) and Rand Paul (R-KY) depart via the Senate Subway following a classified national security briefing of the U.S. Senate on developments with Iran after attacks by Iran on U.S. forces in Iraq, at the U.S. Capitol in Washington, U.S., January 8, 2020. REUTERS/Tom Brenner/File Photo

By Mike Stone and Patricia Zengerle

WASHINGTON (Reuters) – A group of U.S. senators are opposing the Biden administration’s first major arms sale to the Kingdom of Saudi Arabia over Riyadh’s involvement in the conflict in Yemen, three senators announced on Thursday.

A joint resolution of disapproval to block a proposed $650 million in U.S. arms sales to the Kingdom of Saudi Arabia was introduced by Republicans Rand Paul and Mike Lee, as well as Bernie Sanders who caucuses with Democrats.

While many U.S. lawmakers consider Saudi Arabia an important partner in the Middle East, they have criticized the country for its involvement in the war in Yemen, a conflict considered one of the world’s worst humanitarian disasters. They have refused to approve many military sales for the kingdom without assurances U.S. equipment would not be used to kill civilians.

Activists have said Saudi Arabia has lobbied heavily against extending a mandate of United Nation investigators who have documented possible war crimes in Yemen by both the Riyadh-led coalition and the Houthi movement.

The package which was approved by the State Department would include 280 AIM-120C-7/C-8 Advanced Medium Range Air-to-Air Missiles (AMRAAM), 596 LAU-128 Missile Rail Launchers (MRL) along with containers and support equipment, spare parts, U.S. government and contractor engineering and technical support.

In a statement Paul said, “this sale that could accelerate an arms race in the Middle East and jeopardize the security of our military technologies.”

“As the Saudi government continues to wage its devastating war in Yemen and repress its own people, we should not be rewarding them with more arms sales,” said Sanders in the joint statement.

The Biden administration has said it adopted a policy of selling only defensive weapons to the Gulf ally.

When the State Department approved the sale a spokesman said the sale “is fully consistent with the administration’s pledge to lead with diplomacy to end the conflict in Yemen.” The air-to-air missiles ensure “Saudi Arabia has the means to defend itself from Iranian-backed Houthi air attacks,” he said.

State Department approval of a sale is not necessarily the indication of a signed contract.

(Reporting by Mike Stone and Patricia Zengerle in Washington; Editing by Aurora Ellis)