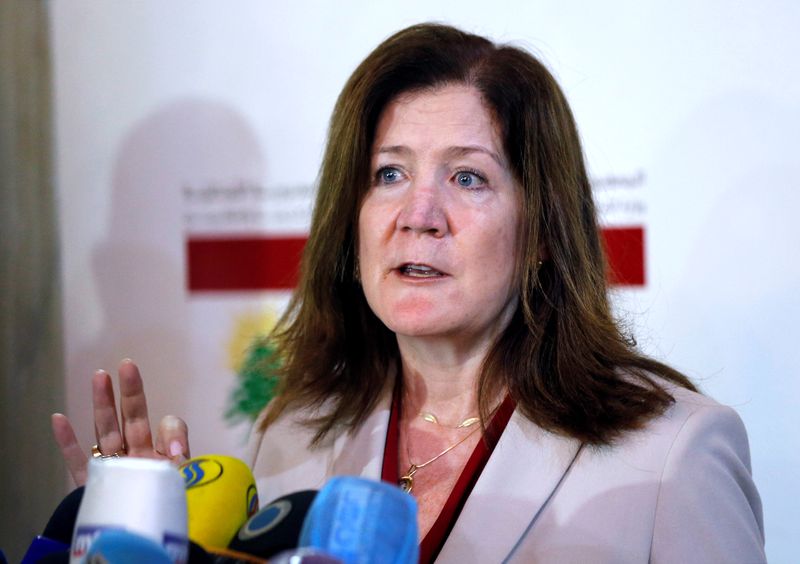 By Timour Azhari and Tom Perry

BEIRUT (Reuters) – Lebanon’s upcoming parliamentary polls must be held on time, U.S. Ambassador Dorothy Shea told Reuters, amid widespread concern that powerful parties may seek to postpone the May vote that could see them lose some power in the legislature.

“The international community is unanimous that the elections must be held on time in a fair and transparent manner,” Shea told Reuters. “There’s no wiggle room.”

The UN Security Council last week “underlined the importance of holding free, fair, transparent and inclusive elections as scheduled on 15 May 2022”.

The May polls come amid a crushing financial crisis in Lebanon seen as the biggest threat to the country’s stability since its 1975-90 Civil War.

They would be the first elections for the 128-member legislature following protests in October 2019 – attended at-times by hundreds of thousands of people in the small country of 6 million – against political elites widely seen as responsible for decades of corruption and mismanagement.

Most major parties and government officials have said they are committed to holding the May polls.

However, analysts say some parties, including allies of the powerful Iran-backed Hezbollah group who together with it have a slim parliamentary majority, could face setbacks at the ballot box.

Karim Emile Bitar, director of the Institute of Political science at Beirut’s Saint Joseph University, said House Speaker Nabih Berri’s Amal Movement and President Michel Aoun’s Free Patriotic Movement stood to lose the most and could push for postponement. Both are key Hezbollah allies and both have been weakened since 2019, he said.

“Seeing that its two major allies are weakened could also incite Hezbollah to work for a postponement of the elections if there is a threat of losing its parliamentary majority,” Bitar said.

Hezbollah, Aoun and Berri have repeatedly said they support holding elections on time.

Maha Yahya, director of the Carnegie Middle East Center in Beirut, said a failure to hold elections on time risked further straining ties with Western nations who could help Lebanon emerge from the crisis.

But “this not a political leadership willing to privilege the national interest over their own. In general, Lebanon’s interests have lost out when it comes to what they see as their own personal stakes in the system,” she said.