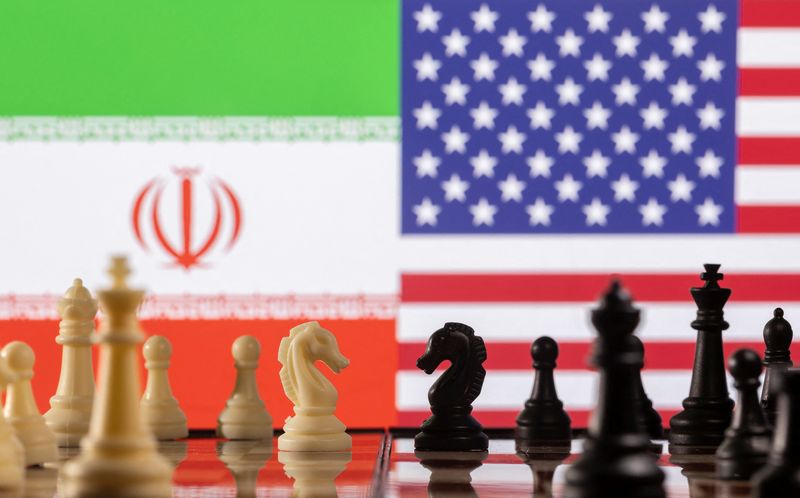 Chess pieces are seen in front of displayed Iran’s and U.S. flags in this illustration taken January 26, 2022. REUTERS/Dado Ruvic/Illustration

The waivers had allowed Russian, Chinese and European companies to carry out non-proliferation work to effectively make it harder for Iranian nuclear sites to be used for weapons development. The waivers were rescinded by the United States in 2019 and 2020 under former President Donald Trump, who pulled out of the nuclear agreement.

The State Department has sent a report signed by Secretary of State Antony Blinken to Congress explaining that restoring the waivers will help the talks in Vienna on returning to the deal reached between Iran and a group of countries including China, France, Germany, Russia, Britain and the United States. The agreement is formally called the Joint Comprehensive Plan of Action (JCPOA).

“The waiver with respect to these activities is designed to facilitate discussions that would help to close a deal on a mutual return to full implementation of the JCPOA and lay the groundwork for Iran’s return to performance of its JCPOA commitments,” according to the report, a copy of which seen by Reuters.

“It is also designed to serve U.S. non-proliferation and nuclear safety interests and constrain Iran’s nuclear activities. It is being issued as a matter of policy discretion with these objectives in mind, and not pursuant to a commitment or as part of a quid pro quo,” the report said.

Quid pro quo is a Latin term meaning a favor for a favor.

The activities, according to the report, include redesign of Iran’s Arak heavy-water reactor, the preparation and modification of its Fordow facility for stable isotope production, operations, training and services related to its Bushehr nuclear power plant, among several other things.

The United States and Iran have held eight rounds of indirect talks in Vienna since April aimed at reinstating the pact that lifted sanctions against Tehran in exchange for restrictions on its nuclear program. There has been no formal announcement on when the ninth round would start, but expectations intensified that it could be next week.

After Trump pulled the United States out of the deal in 2018 and reimposed harsh sanctions, Iran gradually started violating the pact’s nuclear curbs. Western diplomats now worry that its nuclear advancement leaves a very narrow window to return to the deal.

The latest talks in Vienna were “among the most intensive that we had to date,” a U.S. official told reporters on Monday, speaking on condition of anonymity.

The official added that there has been some progress in narrowing down the list of differences and that now is the time for political decisions.

The waiver was needed to allow for technical discussions that were key to the talks about a return to the deal, said a senior State Department official, also speaking on condition of anonymity. The official added that restoring the waiver was not a signal that the United States was on the verge of reaching an understanding to return to the deal.

Eurasia Group analyst Henry Rome said the restoration of the waiver is a “modest sign” of movement.

“The waivers are less a goodwill gesture or a concession to Iran, but rather technical steps that are probably aimed at ensuring implementation discussions can go forward in Vienna,” Rome said.

(Reporting by Humeyra Pamuk and Simon Lewis; Editing by Will Dunham and Jane Wardell)