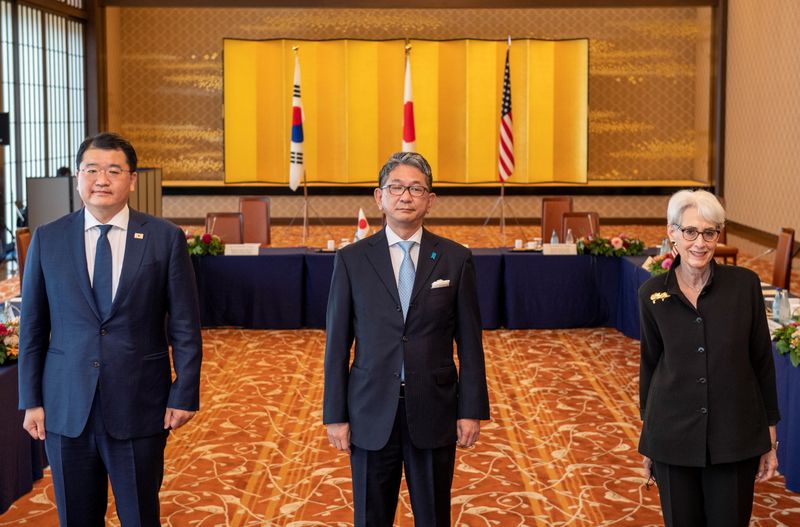 TOKYO (Reuters) – The United States, Japan and South Korea are sending a clear message with their coordination on policy towards North Korea, a senior U.S. official said on Wednesday, despite some recent friction between the two Asian allies.

“That close coordination sends a very critical message to North Korea in that we are together and shoulder-to-shoulder in our approach to this policy,” U.S. Deputy Secretary of State Wendy Sherman told reporters after meeting the vice foreign ministers of Japan and South Korea.

The three-way talks were held in Tokyo despite frayed relations between Japan and South Korea, largely a result of recriminations by both sides stemming from Japan’s intervention in Korea before and during World War Two.

A new chapter of the historic dispute that blew up in 2019 hit trade between the neighbours and threatened to undermine their cooperation on security in the face of a common threat from North Korea and its nuclear and missile programmes.

South Korean President Moon Jae-in recently decided not to visit the Tokyo Olympics, which open on Friday, for what would have been his first summit with Japanese Prime Minister Yoshihide Suga.

Japan’s vice foreign minister, Takeo Mori, said the trilateral cooperation with the United States was crucial for the denuclerisation of North Korea.

North Korea has rebuffed U.S. entreaties for diplomacy since U.S. President Joe Biden took over from Donald Trump, who had three summits with North Korean leader Kim Jong Un, raising hopes for some sort of breakthrough.

Little concrete progress came as Kim refused to give up his nuclear weapons but he did impose a freeze on testing them.

Sherman said the United States was “ready to engage with North Korea and they know that”.

“We hope they will respond positively, but as my colleagues have said, we must exercise some patience, perhaps not too much, but some,” Sherman said.

Sherman did not refer directly to the recent tension between Japan and South Korea. Mori said that issue was not discussed at the trilateral meeting.