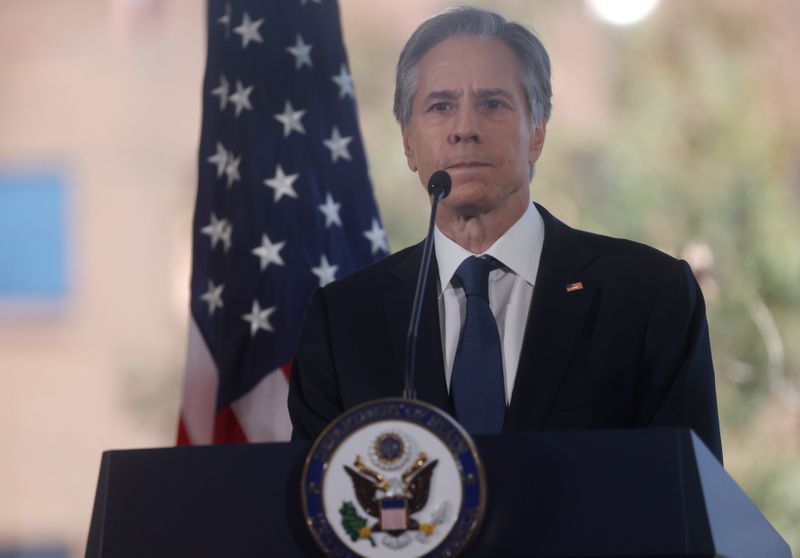 By Kanishka Singh and Jonathan Landay

(Reuters) -U.S. Secretary of State Antony Blinken said on Sunday that the United States was “absolutely in lock step” with Britain, Germany and France on getting Iran back into a nuclear deal, but added it was unclear if Tehran was willing to rejoin the talks in a “meaningful way.”

Blinken’s remarks in an interview with CNN on Sunday come a day after the United States, Germany, France and Britain urged Iran to resume compliance with a 2015 nuclear deal in order to “avoid a dangerous escalation.”

The accord, under which Iran curtailed nuclear work seen as a risk of developing nuclear weapons in exchange for a lifting of global sanctions, unraveled in 2018 after then-President Donald Trump withdrew the United States, prompting Tehran to breach limits on uranium enrichment set by the pact.

“It really depends on whether Iran is serious about doing that,” Blinken of rejoining the nuclear talks. “All of our countries, working by the way with Russia and China, believe strongly that that would be the best path forward”, he added.

Leaders of the four countries hoping to persuade Tehran to stop enriching uranium to near-weapons-grade levels, said on Saturday they wanted a negotiated solution.

“But we do not yet know whether Iran is willing to come back to engage in a meaningful way,” Blinken said on Sunday. “But if it isn’t, if it won’t, then we are looking together at all of the options necessary to deal with this problem.”

Talks between Iran and world powers aimed at salvaging the deal, which started in April, are slated to resume at the end of November, the Islamic Republic’s top nuclear negotiator said on Wednesday.

(Reporting by Kanishka Singh in Bengaluru and Jonanthan Landay in Washington; Editing by Matthew Lewis and Bill Berkrot)