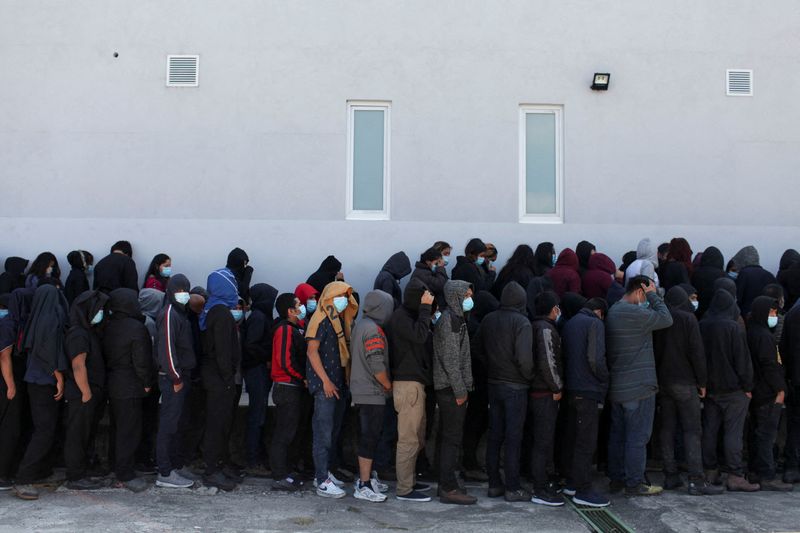 Guatemalan deportees queue outside a government migration facility after arriving on a deportation flight from the U.S., at the Guatemalan Air Force (FAG) headquarters in La Aurora International airport, in Guatemala City, Guatemala December 28, 2021. REUTERS/Sandra Sebastian

GUATEMALA CITY (Reuters) – The United States, with the completion of the three final deportation flights of Guatemalans in 2021, marked a second year of steady decline in the amount of migrants sent back to the Central American country during the COVID-19 pandemic.

Guatemala this year received 17,806 of its citizens deported from the United States via 184 flights. Nearly 4,000 of the deportees were minors, according to data from the Guatemalan Institute of Migration(IGM).

Compared to pre-pandemic figures in 2019 of 54,599 Guatemalan deportees, this year marked a 38% decrease in the number of people sent back by air. In 2020, when some flights were suspended, the United States sent back 21,057 people.

Gerson Sanchez, a 40-year-old merchant from northern Guatemala, said that he and 23 others were arrested in early December crossing into Texas from the Mexican state of Tamaulipas. He was deported on Tuesday from McAllen, Texas, on a flight with 125 other people.

“It was my first time trying to get to the United States to work, but after the bad experience in that detention center, I prefer not to try again,” Sanchez said.

Despite the decrease in deportations from the United States via air, problems at the southern border are worsening as record numbers of migrants arrive in hopes of crossing, according to Ursula Roldan, a migration expert at Guatemala’s Rafael Landivar University.

“This is due to the containment policies of the United States initiated under the Trump administration. This worries us because borders are places of risk due to human trafficking and drug trafficking and migrants are trapped in this area,” Roldan said.

By contrast, the number of Guatemalans deported via land from Mexico doubled in 2021 compared to the previous year. The IGM received 1,194 buses with a total of 40,696 people, compared to 22,901 people deportees in 2020.