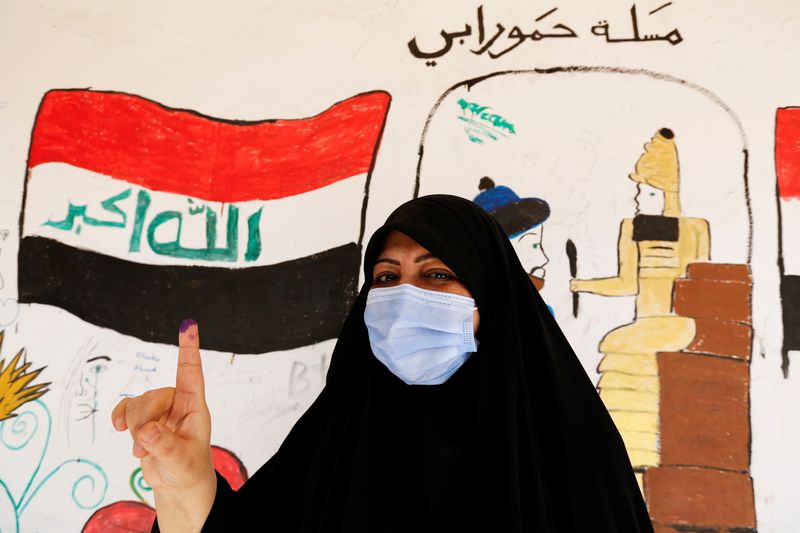 FILE PHOTO: An Iraqi woman shows her ink-stained finger after casting her vote at a polling station during the parliamentary election in Sadr city, Baghdad, Iraq October 10, 2021. REUTERS/Wissam Al-Okaili

(Reuters) – Turnout in Iraq’s parliamentary election earlier this month reached 43%, the electoral commission said late on Saturday, a small increase from preliminary results but lower than that in the last election in 2018.

More than 9.6 million people cast their ballots in the Oct. 10 vote, the commission said.

Populist Shi’ite cleric Moqtada al-Sadr said his movement secured the biggest number of seats in the parliament adding that he would not challenge the results.

“We will seek to form (a) non-sectarian and non-ethnic national coalition under the umbrella of reform,” al-Sadr, who opposes all foreign interference and whose main rivals are Iran-allied Shi’ite groups, said in a statement on Saturday.

The electoral commission had previously said on Oct. 10 that turnout was 41% in preliminary results. In the last election in 2018, total turnout was 44.5%.

Prime Minister Mustafa al-Kadhimi is not running for re-election, but negotiations after the vote could yet see him get a second term. Kadhimi, who is viewed as friendly to the West, has no party to back him.

At least 167 parties and more than 3,200 candidates are competing for parliament’s 329 seats, according to the election commission.