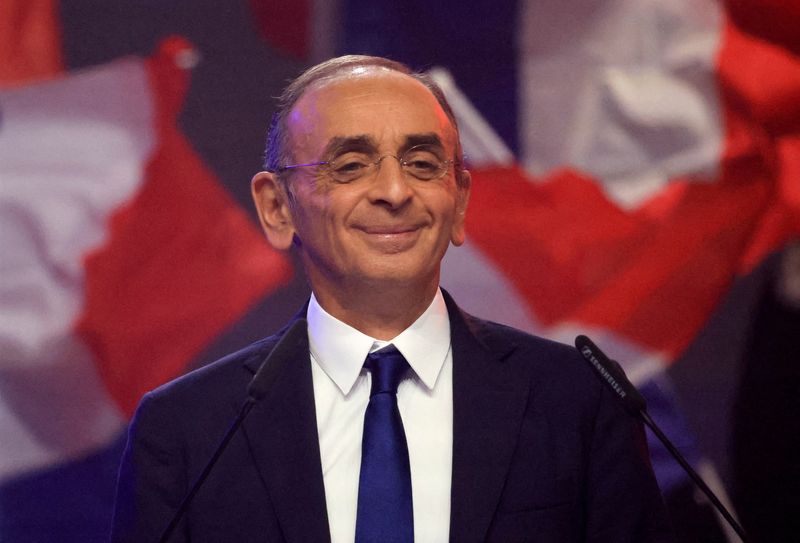 PARIS (Reuters) -French far-right presidential candidate Eric Zemmour had a phone call with former U.S. President Donald Trump who told him not to give in to pressure, a senior official of Zemmour’s campaign said on Tuesday.

Trump’s 2016 presidential run is often cited as a blueprint for the current campaign of former French talk show commentator Zemmour, who has been convicted several times for inciting racial hatred. Zemmour denies he is racist.

“Donald Trump told Eric Zemmour not to give in, hold firm, stay courageous”, said Peltier, adding that the call was held “after Donald Trump’s office responded positively to our various requests.”

Similar to Trump, Zemmour is looking to position himself as an outsider to traditional parties and the French political establishment, banking instead on his celebrity status and large following on social media.

Tenacity and endurance make you win at the end of a campaign, Trump told Zemmour, according to Peltier’s account of the conversation.

Zemmour is fourth in opinion polls and is vying with Marine Le Pen, from the Rassemblement National party who is polling second, for the far-right electorate, with both hoping to beat President Emmanuel Macron in the April election.

In her 2017 presidential campaign, Le Pen sought to display her proximity to Trump when she travelled to the Manhattan business headquarters of the former U.S. president, but left the place discretely when nobody received her.