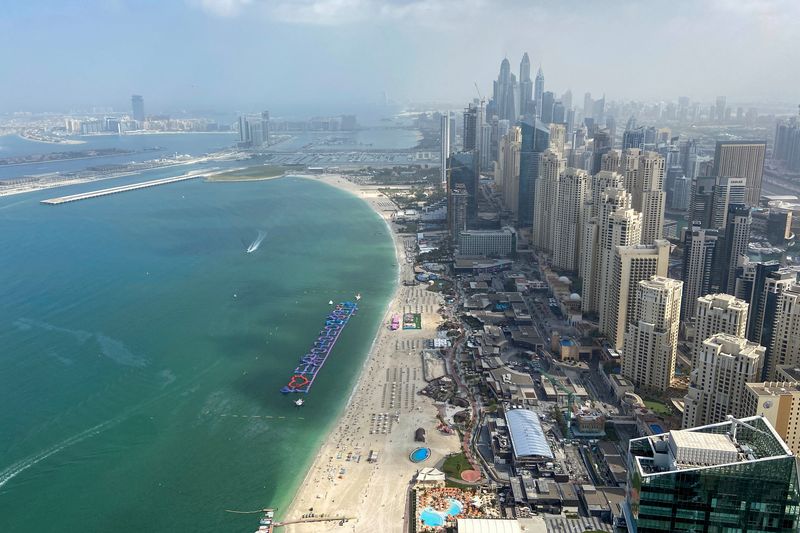 By Alexander Cornwell and Lisa Barrington

DUBAI (Reuters) – Tourists who flock to the United Arab Emirates in search of winter sun appear undeterred by recent missile attacks on the Gulf State by Yemen’s Houthi group that have prompted travel warnings from the United States and Britain.

Data suggests the tourism industry, centred on Dubai, is booming over the peak season, with hoteliers and reservation agents reporting high demand despite the renewal of COVID-19 travel restrictions in many countries late last year.

Beaches are thronged and restaurants thriving, with the Expo world fair bringing more visitors to the Middle East’s trade, finance and tourism hub.

“I feel super-safe,” said Daniel Rivlin, 22, speaking at Expo hours after the UAE said on Monday it had intercepted a ballistic missile fired by the Houthis on the same day Israeli President Isaac Herzog was visiting.

“I feel safe as an Israeli being in Dubai. I feel safe being a foreigner in Dubai,” he added.

October to March, when many Europeans swap freezing winters for the sunny Arabian Peninsula, is peak season for the tourist industry, which according to ratings agency S&P accounted for 13 percent of Dubai’s gross domestic product in 2020.

According to Hopper, a travel search engine that uses historical data to predict and analyse flight prices, searches for the UAE were stable in the first half of January and trended up 22% later in the month.

Monday’s attack followed a Jan. 17 strike on a fuel depot in Abu Dhabi, the UAE’s oil-rich capital, that killed three people. It marked a dangerous new phase in the conflict for the UAE as previous cross-border strikes had mostly targeted Saudi Arabia.

The wealthy U.S. ally – which prides itself on its stability – is part of the Saudi-led coalition fighting the Iran-aligned Houthi movement in Yemen.

After the U.S. State Department urged Americans last month to reconsider travel plans because of the threat of missile or drone strikes, Britain warned in a travel advisory on Wednesday that “further attacks are very likely”.

The Houthis have said they also launched drones at Dubai, home to the world’s tallest building and Ferris wheel, whose glitzy nightclubs and shopping malls are a magnet for tourists.

The attacks have raised rare security jitters among some residents in a country where expatriates are a majority and weakened market sentiment. But tourism appears unscathed.

At Habtoor Grand Resort, popular among British, Russians, Kazakhs, Ukrainians, Germans and French, guests were relaxed, lying in the sun by the pool or playing tennis.

General manager Karolina Paliszewska said there had been no cancellations due to the Houthi attacks, instead forecasting a bumper end to a season she said had already been better than in years just before the pandemic.

“It’s looking much better than last year. The first quarter is far beyond last year, so we are very positive and obviously the Expo is still going on so it brings additional attention,” she said.

“The UAE thanks to its leadership is such a safe place that it’s not even mentioning what may have been. There is zero sense of insecurity or fear amongst us or tourists,” he said, adding that the attacks have had “no impact whatsoever”.

Anastasia Nikitina, who studies in Moscow, was enjoying the sunshine.

“The weather is so nice compared to Russia,” she said. “We feel really safe here and nothing bothers us at all.”