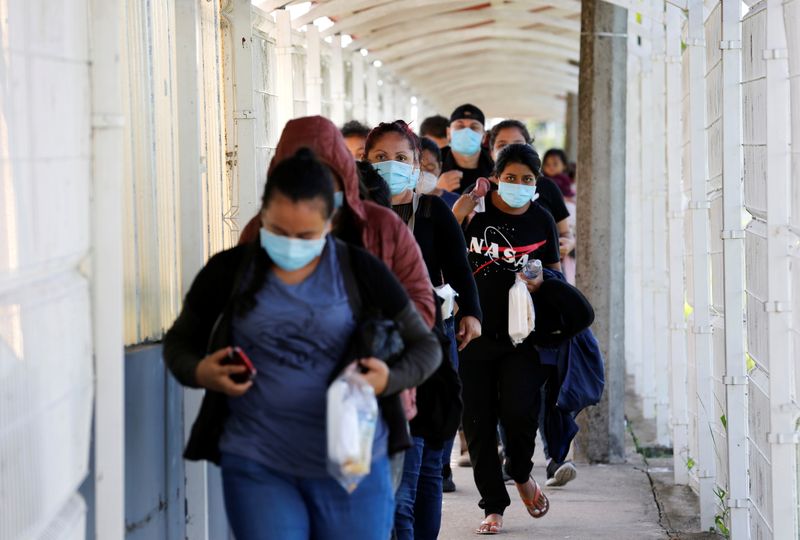 TAPACHULA, Mexico (Reuters) – A bid by Mexico to contain thousands of migrants on its southern border with Guatemala has created a major humanitarian headache https://www.reuters.com/world/americas/mexico-condemns-violent-actions-by-migration-agents-caught-video-2021-08-30 for President Andres Manuel Lopez Obrador, and failed to prevent many from reaching the U.S. border en masse.

Desperate for work, fleeing poverty or violence, the Central Americans, Haitians and South Americans stuck in limbo in the southern city of Tapachula have staged protests and launched repeated attempts to break out in migrant caravans https://www.reuters.com/world/americas/migrant-caravan-mexico-presses-meets-growing-resistance-2021-09-01.

This month, some of them slipped past Mexican officials to join more than 10,000 migrants who crossed into Del Rio, Texas to form a sprawling new camp https://www.reuters.com/world/us/migrants-flown-out-texas-border-city-after-thousands-cross-rio-grande-2021-09-19, reviving U.S. concerns about a huge spike in illegal immigration.

Record numbers of migrants have passed through Mexico this year, driven by economic downturns stemming from the COVID-19 pandemic and drawn by the hope of more welcoming immigration policies under U.S. President Joe Biden.

For the thousands still stranded near the Guatemalan border in the city of Tapachula, many of them subsisting in squalid or cramped conditions, desperation is setting in as they wait for travel papers, or slowly run out of money.

“This is a prison,” complained Jairo Gonzalez, 36, a Nicaraguan construction worker stuck in Tapachula. “There’s nothing you can do if you don’t have money to feed yourself.”

Gonzalez said he reached Mexico City by bus over a month ago after entering the country illegally in the hope of finding a job either in the United States or Mexico.

But Mexican officials detained him and sent him to Tapachula, he said. Gonzalez said he urged them to send him home, but was informed he would not be deported. Now he says he does not have the money to go back.

The government’s National Migration Institute declined to comment on the containment of migrants in Tapachula. The foreign ministry did not reply to requests for comment.

Some of the migrants stuck in Tapachula entered Mexico illegally while others are seeking asylum.

International watchdog Human Rights Watch visited the area in August and reported that although asylum seekers were technically permitted to travel anywhere in Tapachula’s home state of Chiapas until their cases are resolved, immigration checkpoints prevented them leaving the city.

Mexican security officials were caught on video this month beating migrants trying to move out of Tapachula, sparking criticism from the U.N. human rights and refugee offices, and even Lopez Obrador himself.

Washington has pressed Mexico to keep migrants in check as the number stopped trying to cross the U.S. border has more than doubled this year, with over 200,000 apprehended some months.

Mexico’s government says its containment measures are aimed at enforcing its own laws and protecting migrant rights.

Mexican officials argue much of the chaos stems from the dismantling of asylum protections under former U.S. President Donald Trump, and during the coronavirus pandemic.

COVID-19 emergency measures have led to summary expulsions of undocumented immigrants at the U.S. border into Mexico, which in turn encouraged them to attempt repeat crossings https://www.reuters.com/article/us-usa-immigration-border-idUSKCN2D210P, they say.

Biden’s pledges to strengthen protections for migrants in the United States, and to improve the humanitarian lot of asylum-seekers provided further incentives for people to try their luck, they argue.

The U.S. Department of Homeland Security and the White House did not reply to requests for comment. The State Department declined to comment.

To discourage migration, over the summer the United States started sending flights of detained migrants into southern Mexico, including Tapachula. Mexico has also been moving detained migrants by plane from the north of the country to the south.

Absorbing these expulsions, Chiapas now harbors tens of thousands of migrants. As many as 40,000 were in Tapachula this month, and discontent among the resident population is rising, a Mexican official said.

“This chaos will be the end of Tapachula,” said Alejandro Diaz, a local shopkeeper. “Lots of (migrants) don’t wear facemasks and we worry about our health. You can’t drive here any more and even sidewalks are being used by them all day.”

Many of the visitors in the humid city of around 350,000 inhabitants have resorted to sleeping on the streets. Others club together to squeeze into cheap accommodation.

To break the impasse, several caravans set out for the U.S. border in recent weeks. Security forces blocked or broke up the caravans. But many people still got through.

Lopez Obrador says he wants the migrants to remain in southern Mexico, arguing those who go north risk falling foul of criminal gangs.

Many of the people adrift in Tapachula say they have tried to seek asylum or the right to transit Mexico, only for their applications to become ensnared in bureaucracy.

“We don’t deserve to live like this,” said Haitian Lutherson Derisma, 35, who has been in the city for two months. “We didn’t come here to do wrong. I want my family to have a future, but they’re not helping us here.”

Derisma showed a message on his phone from Mexico’s Commission for Refugee Assistance (COMAR) saying that all appointments at its local office would be rescheduled due to the volume of requests, duplicate applications, errors and fraud.

COMAR expects a record of more than 100,000 applications this year, up from a previous peak of 70,000 in 2019. A spokesperson said the delays were because high demand had overwhelmed capacity.