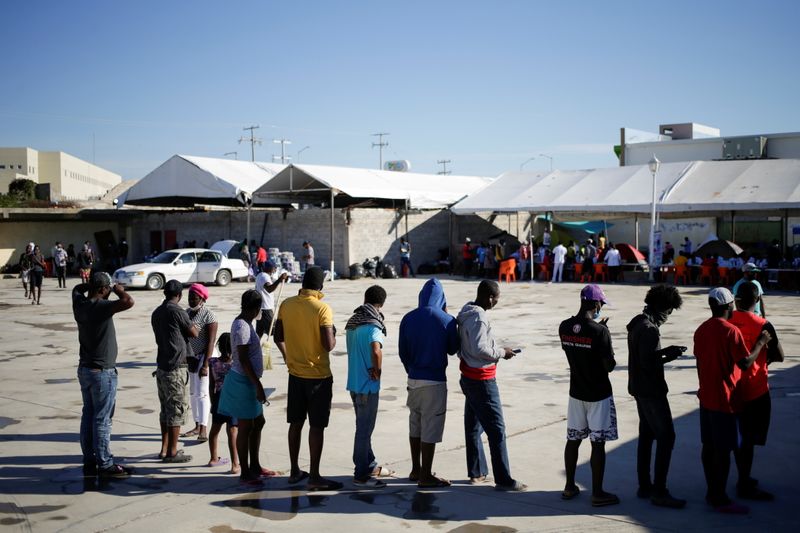 FILE PHOTO: Migrants from Haiti, who returned to the Mexican side of the border to avoid deportation, queue for breakfast at a shelter set by the National Migration Institute (INM) in Ciudad Acuna, Mexico, September 25, 2021. REUTERS/Daniel Becerril

MEXICO CITY (Reuters) – Mexico could see asylum applications jump 70% this year compared with 2019 as requests from Haitians soar, though most of those Caribbean migrants do not meet the criteria under current rules, according to Mexico’s top asylum official.

Haiti is currently the second-most common country of origin for asylum requests in Mexico, and is on track to overtake Honduras to claim the top spot for the first time in nearly a decade.

The surge has been fed by political and economic malaise in Haiti and South America, and last month thousands of mostly Haitian migrants crossed into Del Rio, Texas.

Thousands then retreated back to Mexico https://www.reuters.com/world/us/mexico-urges-haitians-us-mexico-border-give-up-head-south-2021-09-24 to avoid being deported from the United States to Haiti.

Most Haitians do not qualify for asylum in Mexico because they left home years ago for economic reasons, said Andres Ramirez, head of the Mexican Commission for Refugee Assistance (COMAR).

Most resettled in Brazil and Chile after Haiti’s devastating 2010 earthquake and are heading north due to poor economic prospects in their adopted countries, Ramirez told Reuters.

“They’re not really refugees, they don’t even want to be refugees,” Ramirez said in an interview on Monday. “The majority want to get to the United States.”

Haitians were seeking asylum because they had no alternative, but the demand had brought COMAR to a standstill, which was “detrimental to genuine refugees, who we can’t serve because there are too many Haitians,” he added.

Asylum applications are now taking six to seven months, at least twice the time they should take, he said.

In the southern border city of Tapachula, where most migrants request asylum, COMAR is scrambling to lighten the load https://www.reuters.com/world/americas/hundreds-migrants-southern-mexico-scramble-asylum-applications-2021-09-28 by canceling appointments of applicants no longer there.

COMAR is in talks with Mexico’s migration authorities and international aid organizations to see if Haitians have options for staying in Mexico aside from asylum, Ramirez said, such as humanitarian visas that let migrants work and travel freely.

Lasting one year and renewable, that visa is currently only available to migrants after they apply for asylum with COMAR.

“What concerns me is when I know someone isn’t a refugee, and they come to us because they have no other option,” Ramirez said. “But there could be another way… there is a precedent.”

Mexico distributed humanitarian visas in early 2019 when thousands of Central Americans arrived in migrant caravans, but stopped after U.S. President Donald Trump threatened to impose trade tariffs if Mexico did not curb the flow of people.

The Biden administration is also putting pressure on Mexico to stem migrant traffic, even as it gradually rolls back Trump-era measures and promises more humane migration policies.

Mexico’s National Migration Institute did not immediately respond when asked if it was considering issuing humanitarian visas to Haitian migrants.

Asylum applications in Mexico from all nationalities reached 90,300 by September. Ramirez estimated the number could surpass 120,000 by year’s end.

Suppressed by the coronavirus pandemic, applications tumbled to just over 41,000 last year, but rose for Haitians, who filed 5,957 requests. From January to September 2021, the number of Haitian applications leapt to 26,007.

An increase in requests from Brazilians and Chileans has been fueled by children born to Haitians in those countries, Ramirez said.