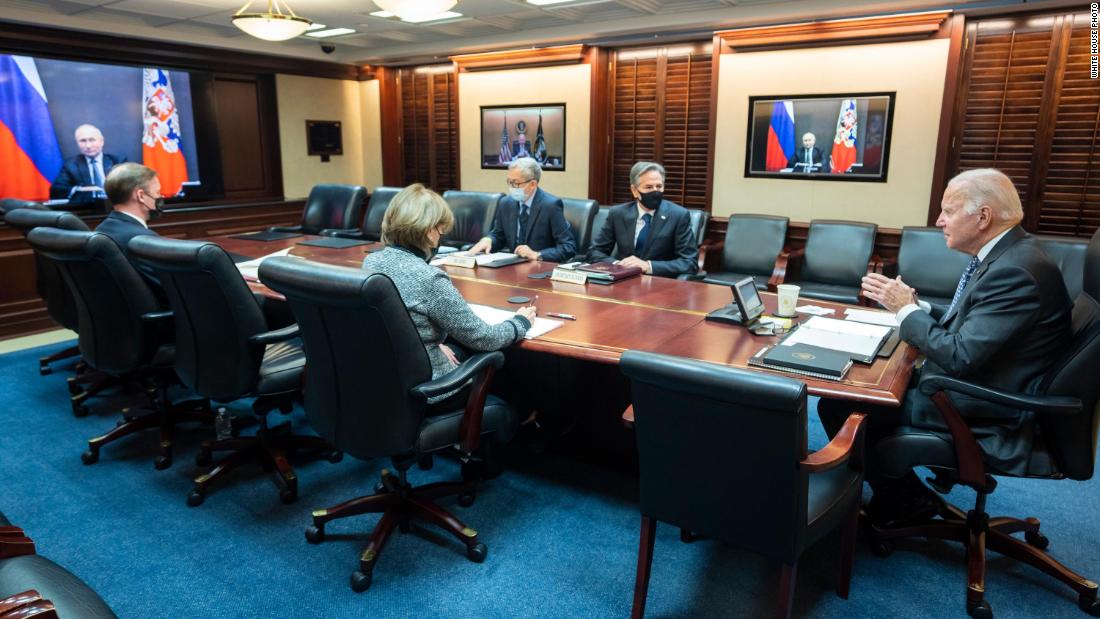 In just the last two days, Biden’s White House has announced that American diplomats would boycott the 2022 Winter Olympic Games in China and the President held a secure video call with Vladimir Putin in which he made clear the US is ready to impose economic penalties should Moscow escalate military action in Ukraine.
“One nation can’t force another nation to change its border; one nation cannot tell another to change its politics; and nations can’t tell others who they can work with,” Biden told the Russian leader, according to an official familiar with the conversation.
Two days later, Biden will convene a democracy summit designed as a show-of-force against authoritarian regimes, hoping to make an argument for democracy at the same time he presses his allies to take a harder line against countries like Russia and China.
The week’s events have laid bare competing crosscurrents of Biden’s foreign policy — at once isolating anti-democratic regimes while also trying to engage their leaders. It’s a balancing act that crystallizes the competition Biden sees as defining the rest of the 21st century — democracy vs. autocracy — while showing some echoes of the previous one.
When the White House announced this week that no American officials would attend the upcoming winter Olympics in Beijing, officials were hesitant to label the decision a “boycott,” wary of drawing parallels to Jimmy Carter’s move in 1980 preventing even American athletes from participating in the Moscow games at the height of the Cold War.
Comparison to that long stretch of frigid superpower competition isn’t welcome in the Biden administration, which downplays those similarities to current global threats. Biden himself told the United Nations earlier this year he was not seeking to divide the world into “rigid blocks,” though he repeatedly describes an existential battle between democracies and autocracies.
Speaking with leaders like Putin and China’s Xi Jinping, while also trying to convince allies to form a united front against them, has proved an enduring element of Biden-era foreign policy as he seeks to keep worsening relations with Russia and China from toppling over into open conflict.
The White House insists Thursday’s democracy summit isn’t meant as a challenge to any single country or leader, even if some appear to be interpreting it that way.
Yet the list of invitees — which includes Taiwan — has already generated anger in China, which insisted it, too, was a democracy.
“We see the summit’s goals as being about much more than any one government,” a senior administration official said on Tuesday in previewing the gathering. “The summit really aims to bring together a diverse group of participants to build a shared foundation for democratic renewal, and we think it’s a strong story to tell.”
Originally conceived when he was a candidate hoping to rebut then-President Donald Trump’s embrace of global strongmen, the meeting will be centered around three pillars: strengthening democracy and defending against authoritarianism, fighting corruption and promoting respect for human rights, officials said. They explained the invite list — which includes some countries with poor track records on human rights, like Pakistan — was designed to highlight democracy at all levels of society, not just in national government.
During the summit, Biden won’t shy away from acknowledging recent struggles in the United States on upholding its own democracy, according to officials involved in planning the event, who cited Biden’s past criticism of Trump’s false allegations widespread election fraud as something he could repeat during his two appearances at the virtual gathering.
“The President has been absolutely clear that protecting Americans’ constitutional rights and the integrity of our elections from the systematic assault that folks — in particular, Republican legislators — have been engaged in across the country is a must and that this historic threat requires strong voting rights legislation. And you’ll hear that from the President again this week,” an official said.

Proving democracy can better deliver than autocracy has been the underpinning of Biden’s entire foreign policy and the driving theme of his two trips abroad so far.
Yet sour domestic politics and persistent inequality have provided an opening for countries like Russia and China to criticize American-style democracy as flawed, seeking to undermine Biden as he works to rally the world against authoritarianism. China’s state council released a paper over the weekend titled “China: Democracy that works,” despite the country not holding elections for its leaders and banning opposition political parties.
Putin, meanwhile, has claimed the arrest of rioters involved in the January 6 insurrection attempt at the US Capitol amounts to a crackdown on dissent, adopting a talking point used by Republicans who have defended the event as a peaceful protest.
Presidents Putin and Xi are both men with whom Biden shares a long history, though each has demonstrated a steady drift toward authoritarianism since Biden was taking meetings when he served as vice president.
As he began a two-hour-and-one-minute phone call with Putin on Tuesday, arranged to warn of dire economic consequences should he move ahead with an invasion of Ukraine, Biden made clear he wanted to see the Russian leader again soon.
“I hope the next time we meet we do it in person,” Biden told Putin as the talks got underway, Biden sitting in the basement White House Situation Room and Putin beaming in from his dacha on the Black Sea.
The talk became more serious from there, according to officials, who said Biden spelled out in businesslike terms what might happen should Putin decide to move ahead with an invasion, including potential sanctions on members of Putin’s inner circle and deployment of additional US troops to NATO member countries.
“It was a useful meeting,” Biden’s national security adviser Jake Sullivan said afterward, saying Biden warned Putin he is ready to take steps the US previously avoided should he decide to move ahead with an invasion.
“Things we did not do in 2014, we are prepared to do now,” Biden told Putin, according to Sullivan.
It was a notable message given Biden’s own recommendations when he was vice president to then-President Barack Obama that the US increase lethal aid to Ukraine and force severe economic pain on Russia — steps that met resistance from other administration officials.

Now, Biden says he is prepared to go further. If they are issued, sanctions are likely to go after top Russian oligarchs, limiting their ability to travel and potentially cutting off access to American banking and credit card systems. Officials have also been weighing disconnecting Russia from the SWIFT international payment system, upon which Russia remains heavily reliant, a “nuclear” option that would inflict serious economic damage.
Biden spent the evening prior to his call working to convince European leaders to join him in threatening withering economic sanctions on Russia should Putin decide to invade Ukraine, despite fears the Russian President could tighten gas supplies to Europe as the weather turns colder.
Over the past several weeks, US and foreign officials have also discussed the possibility of a collective diplomatic boycott of the Beijing Olympics, though as of Wednesday, only Australia had joined the US in announcing one.
It was only three weeks ago Biden convened a lengthy virtual summit with Xi intended to bring a sense of predictability to an otherwise fractious relationship between Washington and Beijing. Officials said the topic of the Olympics didn’t arise.
There were signs early in Biden’s presidency that diplomacy with Russia and China would be a rocky endeavor. Within the span of one week in March, Biden raised Putin’s ire by calling him a “killer” in an interview, while in Alaska some of his top diplomats openly sparred with their Chinese counterparts as cameras rolled.
Since then, Biden and his team have strived to bring the relationships with Russia and China into more predictable terrain, including by arranging summits between Biden and their leaders.
The difficulties of the approach are also becoming plain.
Six months after his closely watched face-to-face summit with Putin in Geneva — the success of which he said afterward could only be discerned in six months — he is working to stave off a potential Russian invasion of Ukraine.