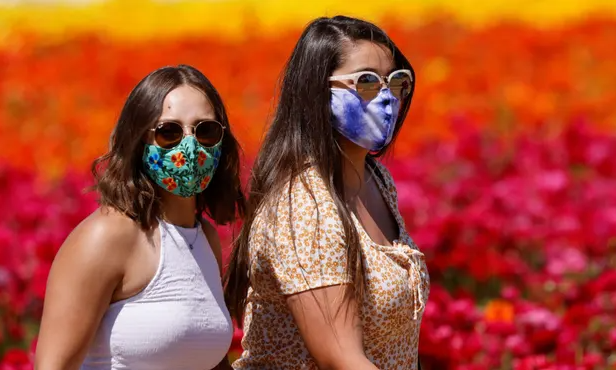 More than a year into the pandemic, some people prefer to keep wearing their face mask – even outdoors in public

She’s been fully vaccinated for three weeks, but Francesca, a 46-year-old professor, does not plan to abandon the face mask that she’s come to view as a kind of “invisibility cloak” just yet.

“Maybe it’s because I’m a New Yorker or maybe it’s because I always feel like I have to present my best self to the world, but it has been such a relief to feel anonymous,” she said. “It’s like having a force field around me that says ‘don’t see me’.”

Francesca is not alone. After more than a year of the coronavirus pandemic, some people – especially some women – are reluctant to give up the pieces of cloth that serve as a potent symbol of our changed reality.

Whether and when to wear a face mask has been one of the most fraught and divisive debates of the pandemic, from the early days of (bad) expert advice against masking, to the anti-masker protests of summer 2020, and the current, oddly angry public debates about when people should stop wearing masks outside.

US officials in recent weeks have said that fully vaccinated Americans can go outdoors without a face mask, except in big crowds. But while Tucker Carlson on Fox News frames continued mask-wearing as child abuse, Emma Green in the Atlantic portrays liberals who remain very concerned about Covid as anti-science, and various pundits toss around accusations of “irrationality” or pandemic “addiction”, some people told the Guardian that they simply prefer wearing their face masks in public. It has nothing to do with being pro-science or anti-science, liberal or conservative, they said. Instead, it’s about the fact that there are more things that can hurt them than viruses, including the aggressive or unwelcome attention of other people – or even any attention at all.

“It’s a common consensus among my coworkers that we prefer not having customers see our faces,” said Becca Marshalla, 25, who works at a bookstore outside Chicago. “Often times when a customer is being rude or saying off-color political things, I’m not allowed to grimace or ‘make a face’ because that will set them off. With a mask, I don’t have to smile at them or worry about keeping a neutral face.”

“I have had customers get very upset when I don’t smile at them,” she added. “I deal with anti-maskers constantly at work. They have threatened to hurt me, tried to get me fired, thrown things at me and yelled ‘fuck you’ in my face. If wearing a mask in the park separates me from them, I’m cool with that.”

Aimee, a 44-year-old screenwriter who lives in Los Angeles, said that wearing a mask in public even after she’s been vaccinated gives her a kind of “emotional freedom”. “I don’t want to feel the pressure of smiling at people to make sure everyone knows I’m ‘friendly’ and ‘likeable’,” she said. “It’s almost like taking away the male gaze. There’s freedom in taking that power back.”

Bob Hall, a 75-year-old retired researcher in New Jersey with a self-described “naturally grim countenance [that] tends to be off-putting to others”, concurred. “In the United States there is an obligation to appear happy, and I get told to smile and ‘be happy’ a lot, which is very annoying,” he said. “The mask frees me from this.”

For Elizabeth, a 46-year-old tutor living near Atlanta, Georgia, the mask has accomplished for her social anxiety what years of therapy and medication have not: allowing her to feel comfortable while out in the world.

“I’m short and fat and if I don’t moisturize compulsively, my face is constantly flaking,” she said. “It’s easy to feel like I’m surrounded by mocking, disapproving eyes … Nothing has shielded me from the feeling of vulnerability like a mask has.”

Who has the right to exist in public without question is one of the constant, defining struggles of any society. For years, countries have debated and even banned Muslim women from wearing the niqab, a full-face veil, and women who wear the hijab, a head scarf, face high rates of discrimination. Some Muslim women told researcher Anna Piela that the pandemic allowed them to feel more comfortable adopting the niqab, which they had wanted to do before.

Early in the pandemic, many Asian Americans and Asian immigrants were among the first to adopt face masks, a decision that may have protected their health while simultaneously making them targets for racism. A year later, with coronavirus cases down but concerns about anti-Asian hate crimes much higher, some are looking to masks as a form of disguise.

“The night of the Atlanta murders, I was messaging with another Asian American friend and she mentioned making sure to wear sunglasses and a mask before she went out, just so that no one could see her eyes or nose and guess she’s Asian,” said Jane C Hu, a 34-year-old science journalist living in Seattle. “I definitely feel a sense of protection when no one can see my face.”

Jinghua, a 34-year-old non-binary writer living in Melbourne, Australia, said that masking had provided relief from being wrongly perceived “as a woman or a little boy” in public.

“I appreciated that I felt a bit more anonymous in a mask and more gender ambiguous,” they said. “After lockdown ended, it was confronting to go out and be exposed to all that offhand racism, sexism and misgendering from strangers again … Sometimes when I’m just going out to grab takeaway, I’ve enjoyed keeping the mask on even though it’s not really necessary here now.”

The sense of privacy that masks can provide in public is somewhat offset by the scrutiny some remote workers now feel when they’re at home, but working.

Hartley Miller, a 33-year-old tech worker in San Francisco, said that the past year of constant, camera-on Zoom calls has seriously exacerbated her body dysmorphia, a mental health condition that involves obsessive thinking about a perceived flaw in one’s appearance.

“I just stare at that little box with my face in it and pick apart my appearance,” she said, noting that her distress is affecting her job performance. “My double chin seems 6 times larger, my eye bags are too deep of a purple, etc … Even when there’s a heatwave and my apartment is close to 90 degrees, I’ll wear a turtleneck that I can pull up. I pack on thick makeup that makes my skin peel.”

Going out in public with a black surgical mask that covers her chin and sunglasses that cover her eye bags provides Miller with an escape from that sense of scrutiny.

“I 10,000% plan on wearing it for the foreseeable future,” she said. “After a full work day of worrying and not being able to focus on my actual job, it just feels nice to blend in. Simply put, I’m sick of being perceived.”