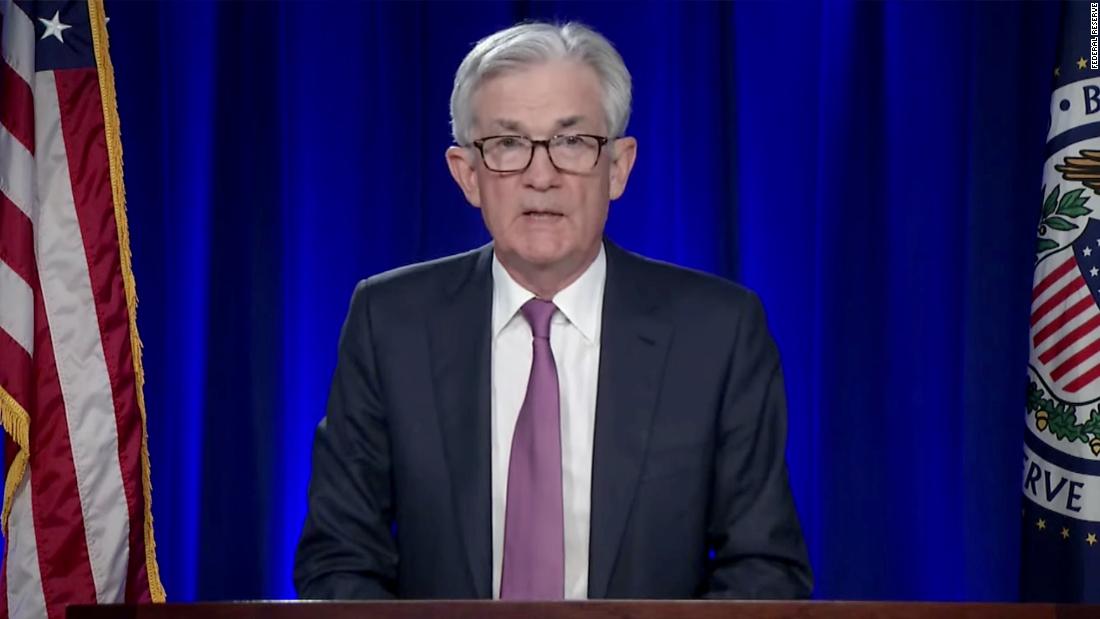 A version of this story first appeared in CNN Business’ Before the Bell newsletter. Not a subscriber? You can sign up right here. You can listen to an audio version of the newsletter by clicking the same link.
What’s happening: The Fed announced Wednesday that it would begin lifting rates “soon” to combat the sharp rise in prices. Chair Jerome Powell said the central bank is currently eyeing March for its first hike. He declined to rule out a larger half-point rise instead of a quarter-point increase.
The S&P 500 finished slightly lower. It’s finished 12 of 17 trading sessions this year in the red, shedding 8.7%. But not every part of the market is showing as much distress.
Investors in corporate bonds have largely stood their ground. The iShares exchange-traded fund that tracks investment grade corporate bonds, which goes by the ticker “LQD,” has dropped just 4% this year. A similar fund from SPDR and Bloomberg that tracks bonds with lower credit ratings (“JNK”) is just 2.5% lower.
“Corporates have very much been held in check at this juncture,” Matthew Cairns, head of credit strategy at Rabobank, told me.
What explains the discrepancy? It comes down to the fact that companies still have tons of cash on hand, and are expected to keep minting healthy profits even as the Fed engineers a shift in policy.
“Corporate balance sheets are in excellent condition. We’ve had the best part of a decade of very easy money, which has provided an incredible level of support,” Cairns said. “This has provided an enormous buffer for them.”
Even if the Fed pursues four interest rate hikes throughout the course of 2022, borrowing costs would still remain very low by historical standards, he continued.
Watch this space: One thing that could jolt corporate bond markets would be if the Fed decides interest rate hikes aren’t enough to fight inflation and moves to rapidly reduce its balance sheet, Antoine Bouvet, senior rates strategist at ING, told me.
Should the Fed start unloading chunks of the trillions of dollars in assets it has bought since the start of the pandemic, that could send shockwaves through the system.
So far, however, there hasn’t been any indication the Fed will do this. Powell said Wednesday that the Fed sees interest rate increases as the “primary means of adjusting monetary policy,” and that balance sheet reductions “will occur over time in a predictable manner” only after the process of raising interest rates has kicked off.
And even when the Fed does begin to reduce its holdings, the size of its balance sheet will remain “enormous,” propping up investor confidence, according to Cairns.
“We’re not going back to normal,” he said.

The US economy likely stayed strong at the end of 2021

The Omicron variant put fresh pressure on America’s recovery in late 2021. But the economy probably held strong.
The latest: Economists predict US gross domestic product, the broadest measure of economic activity, grew at an annual rate of 5.5% between October and December, according to estimates from Refinitiv. The first look arrives Thursday.
That would be a big uptick from the 2.3% annualized growth rate reported in the third quarter, when the Delta variant weighed on the economy. But the future looks murkier, my CNN Business colleague Anneken Tappe reports.
Jefferies chief economist Aneta Markowska told Anneken that the bank has penciled in a growth rate of just 1.5% for the first three months of 2022.
On the radar: The International Monetary Fund this week slashed its global growth forecast for 2022 by half a percentage point to 4.4%. That was in part because of a big downgrade for the US economy.
The IMF sees America’s economic output increasing 4% this year after rising by 5.6% in 2021. It shaved 1.2 percentage points off its previous forecast due to “lower prospects” that Congress will pass President Joe Biden’s Build Back Better economic plan, lingering supply chain disruption and the rising chance of aggressive action by the Federal Reserve to rein in inflation.

This financial weapon could be what Russia fears most

Some are calling it the “nuclear option.”
As Western governments threaten Russia with a package of unprecedented sanctions aimed at deterring President Vladimir Putin from ordering an invasion of Ukraine, there’s one measure in particular that appears to strike fear at the heart of the Kremlin: cutting the country off from the global banking system.
US lawmakers have suggested in recent weeks that Russia could be removed from SWIFT, a high security network that connects thousands of financial institutions around the world, my CNN Business colleague Charles Riley reports. Senior Russian lawmakers have responded by saying that shipments of oil, gas and metals to Europe would stop if that happened.
What is SWIFT? The Society for Worldwide Interbank Financial Telecommunication was founded in 1973 and is now used by over 11,000 financial institutions to send secure messages and payment orders. With no globally accepted alternative, it is essential plumbing for global finance.
Removing Russia from SWIFT would make it nearly impossible for financial institutions to send money in or out of the country, delivering a sudden shock to Russian companies and their foreign customers — especially buyers of oil and gas exports denominated in US dollars.
“The cutoff would terminate all international transactions, trigger currency volatility, and cause massive capital outflows,” Maria Shagina, a visiting fellow at the Finnish Institute of International Affairs, wrote in a paper last year for Carnegie Moscow Center.
Could it happen? There’s precedent. SWIFT unplugged Iranian banks in 2012 after they were sanctioned by the European Union over the country’s nuclear program. Iran lost almost half of its oil export revenue and 30% of foreign trade following the disconnection, according to Shagina.
Altria (MO), Dow (DOW), JetBlue (JBLU), Mastercard (MA), McDonald’s (MCD) and Southwest Air (LUV) report results before US markets open. Apple (AAPL), Mondelez (MDLZ), Robinhood and Visa (V) follow after the close.
Also today: The first look at US GDP for the last three months of 2021 arrives at 8:30 a.m. ET, along with initial jobless claims for last week.
Coming tomorrow: Earnings from Caterpillar (CAT) and Chevron (CVX).