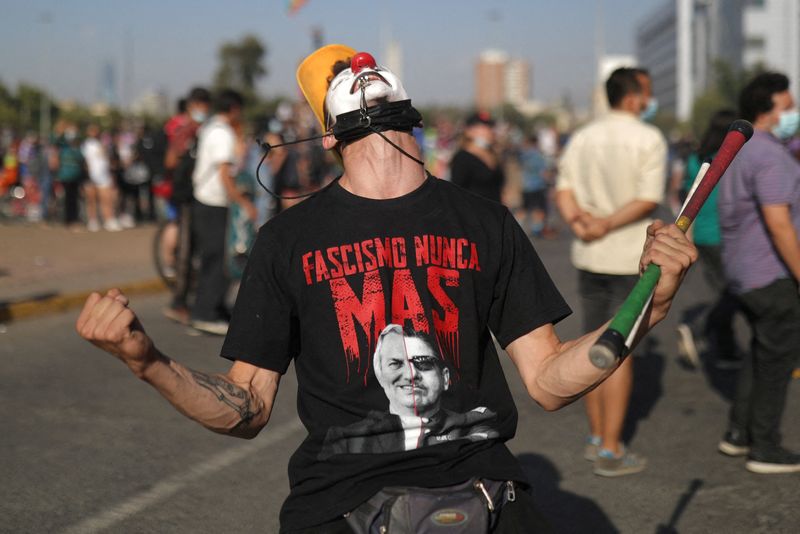 SANTIAGO (Reuters) – Chilean Mireya Garcia, 64, feels there is more at stake than usual in this Sunday’s presidential election.

For Garcia and many of her generation, this, the most polarized of Chile’s elections since its return to democracy in 1990, has opened old wounds.

Garcia’s brother was forcibly disappeared in 1977 during the dictatorship and Kast’s praise of Pinochet has angered her.

“The coup totally destroyed our family and we were never the same,” Garcia told Reuters.

“This has unexpectedly turned into one of the most closely-fought elections and what is at stake is that on the one hand the extreme right is clearly a danger for Chile and on the other hand, there is a candidate who represents the youth,” said Garcia.

Older Chileans lived through the tumultuous years of socialist President Salvador Allende, the 1973 coup that ousted him and ended his life, and the bloody 17-year military dictatorship that followed.

Since the dictatorship ended, Chilean elections have generally pitted moderate leftists against center-right candidates. The country has been known as an island of stability and orthodox policies in Latin America.

Now the old, deep divisions between the socialist left and far-right seem to be resurfacing.

Kast has praised Pinochet’s market-oriented “economic legacy” and appealed to voters with proposals seemingly taken from the playbook of right-wing populist leaders like Brazil’s Jair Bolsonaro https://www.reuters.com/world/americas/chiles-bosolonaro-hard-right-kast-rises-targeting-crime-violence-2021-11-22 and former U.S. President Donald Trump, such as building a ditch to curb illegal immigration.

On Thursday night, Kast promised thousands of supporters at a rally that he would bring order, after protests in 2019 saw buildings around capital Santiago burned and thousands injured in conflicts with the police.

“Chile is not and will never be a communist or Marxist nation,” he said – a dig at Boric, who is allied with Chile’s Communist Party within a wide leftist coalition.

The historical parallel was not lost on Kast’s supporters.

“I’m from the 1973 generation, I experienced the Popular Unity party, I experienced Salvador Allende and it was chaotic,” said 67-year-old pensioner Aurora Oviedo, a Kast supporter.

“We didn’t have anything to eat and we had to wait in line for everything.”

Democratically-elected Allende, a Marxist, was overthrown by Pinochet in the 1973 coup. During Pinochet’s 17-year time in power, more than 3,000 people were killed or disappeared and tens of thousands tortured.

“I was young, I took to the streets to call on the armed forces,” said Oviedo, adding that she attended the Kast rally because she does not want a “communist” to become president.

In an unexpected twist of fate that has also brought reminders of the dictatorship’s legacy, Pinochet’s widow Lucia Hiriart https://www.reuters.com/world/americas/lucia-hiriart-widow-chilean-dictator-pinochet-dies-aged-99-2021-12-16 died on Thursday at the age of 99.

In response, hundreds of people thronged to a Santiago plaza, waving flags and chanting, some bearing the photos of those disappeared by the military regime.

Manuel Valenzuela, 78, holding a portrait of Allende in his hands, was among them.

The widow’s passing was “divine justice” and hopefully it would serve as a lightning rod to get people out to vote for Boric, said Valenzuela, a former political exile.

The run-off vote is also the first presidential decider since the 2019 protests against economic inequalities that eventually sparked a still ongoing process to undo one of the main remaining vestiges of the dictatorship: a revamp of Chile’s constitution.

But both candidates have moderated https://www.reuters.com/markets/us/chiles-polarized-election-stark-divides-offer-investors-silver-lining-2021-12-17 as the race has tightened, seeking to win over centrist voters. Congress, elected in November, is split down the middle between left and right, creating a likely brake on radical reform.

Older Chileans are quick to point out that despite the political vitriol things are nowhere near as bad as they were in 1973.

During Allende’s government Maria Angelica Quezada, 68, said she was turned away from the supermarket because she did not belong to the local political party.

“I didn’t have the right to eat, to shop because I wasn’t registered in the party,” said Quezada, who plans to vote for Kast.

Berta Vilche, a 73-year-old retired lawyer and Boric supporter, said that “when people talk about how polarized our society is they don’t know what they’re talking about.”

“Today’s polarization has nothing to do with what was going on back then. The coup was really, really terrible.”